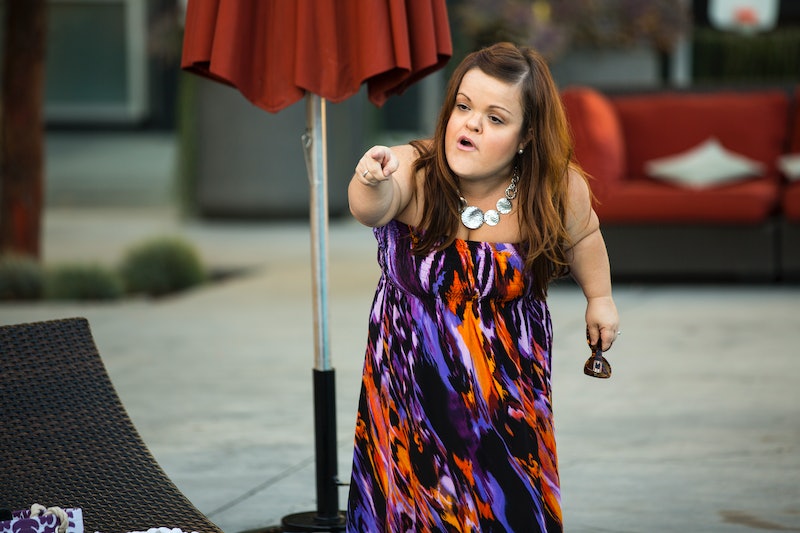 Forget about all of the petty drama on Little Women: LA for a second, and think about the serious situation cast member Terra Jole is now focused on: having a baby. It looks she's going to try to put the drama aside in the upcoming Jan. 14 episode of Little Women: LA as she goes shopping for her future child and seems to get some sobering news from the doctor. However, we all know it's impossible to go an episode of Little Women: LA without some drama, and it looks like Terra's perennial frenemy Christy McGinity Gibel is at the ready to throw some shade.

Christy and basically her only true friend on the show Briana Manson are expected to call Terra's intentions with her friendships into question in the upcoming episode. That seems a bit out of the blue, considering Terra and Christy have been pretty cordial this season. Christy didn't even try to pull Terra's hair when she told the other ladies about her pregnancy, as I had anticipated. However, Christy and Terra actually have a long history of going at it.

As you probably recall, Terra and Christy were so far from being friends during Season 1 of Little Women: LA, it wasn't even funny. OK, maybe it was a little, but the point is these two had some of the nastiest feuds of the season. When Terra randomly blurted out that Christy had told her she broke her sobriety by drinking some beer, Christy was not having it. She vehemently denied Terra's claims, but Terra wouldn't relent either. You can probably guess that this argument was brought up again. And again. And again throughout the season.

There was also an incident where Christy tried to get the other ladies to bow out of Terra's music video shoot, saying how embarrassing it would be to appear in what she thought would be a train wreck. Yeah, she was kind of right about that, but still, not nice, Christy. Not nice. Todd also joined in the fight at the screening party for Terra's video.

The fight ended up cooling toward the end of the season as the feud between Christy and Traci Harrison heated up. Now this season, Christy and Terra haven't really said much to each other at all. Does that mean things between them are all good?

Well, Christy and Terra have interacted similarly on screen as they have off screen. That means basically not at all. They haven't mentioned each other on Twitter since July. They also haven't really been in any photos with each other on Instagram in the past six months, at least from what I can tell from Terra's profile (Christy's profile is listed as private).

The last time they did interact on Twitter, it wasn't looking good for these two supposed pals. Terra accused Christy of lying on the show and criticized her career and pressuring of Todd to propose. Of course, Christy fought back and made it into a thing on Twitter.

The fact that we haven't heard much from these two since then probably means that they're not too friendly anymore. If you don't talk on social media, when do you talk? Oh yeah. Probably when the camera is on.