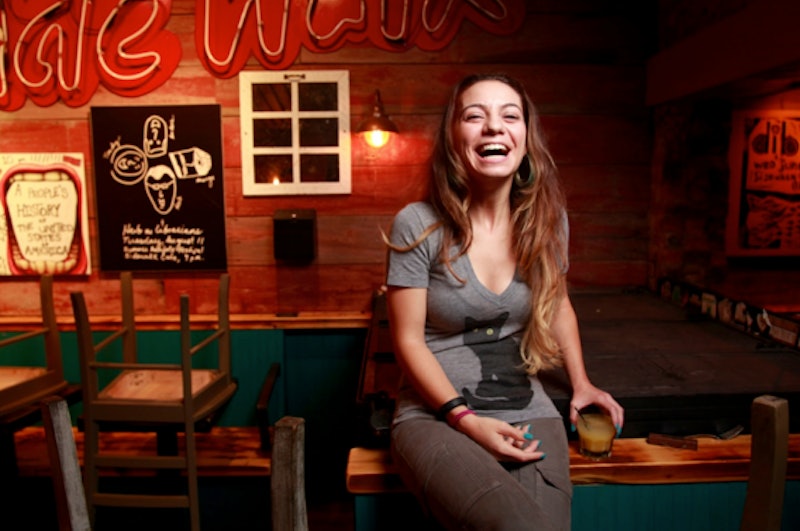 Because it’s Wednesday, let’s start the day off with a little comedy, shall we? Comedian Liz Miele’s feminist sex positions are just the thing to get you going today: A little biting wit, a little more hearty laughter, and a big, huge lesson in feminism (and in how not to be a jerk in general). This video should be required viewing for just about everyone. For reals.

Although the video is a little over a month old — Miele first posted it to her YouTube channel on Dec. 8, with the performance featured having been aired on AXS TV’s Gotham Comedy Live — it’s just started to make the rounds now. In it, Miele, who is the second oldest of five kids, recounts a story from her own life when she went to visit one of her little sisters and her little brother, Sam, in the apartment they shared. She walked in to find Sam telling what she describes as “those ‘funny’ sexual position jokes” to their sister — and yes, you can hear the quotation marks around “funny,” because let’s face it: “Funny” sexual position jokes are not funny. In fact, they are generally the opposite of funny, especially since women are usually the punchlines. This isn’t to say that sex jokes (or sex in general) can’t be funny; since so many of them fall under the heading of “Horribly Misogynistic,” though, most of them aren’t. The joke Sam told during this particular incident involves a position called “The Poltergeist,” and, well… let’s just say that it’s not terribly amusing.

Miele figured, though, that she could at least use the incident as a teachable moment. Accordingly, she came up with a few jokes of her own to counter jokes like “The Poltergeist”: A series of “feminist sex positions.” The three she dreamed up are called “The 19th Amendment,” “The Equal Pay Act,” and “Make Your Own Dinner,” and, well… maybe you’d better just watch the video to find out what each one entails:

I believe the phrase we’re looking for is, “How do you like them apples?”

There are probably a lot of people out there who are offended by the fact that other people are offended by jokes like “The Poltergeist” (because that makes sense, except it doesn’t); there are also probably a lot of people out there who would argue that merely telling the same kind of jokes with the gender roles and punchlines flipped doesn’t accomplish anything. But I beg to differ: As with all good comedy, Miele’s feminist sex position jokes are more than just a punchline — they’re meant to make you think. A lot of offensive behavior doesn’t happen because someone is trying to be offensive; often, it’s just because they haven’t stopped to think about what they’re doing or saying. That’s pretty much what was going on with Sam and “The Poltergeist.” By turning the tables like this, it forces you to consider how things look from the butt end of the joke — not so funny now, is it? So, if you don’t find it funny to be in that position (pun intended), then maybe don’t put other people in it, either. Lesson learned.

More like this
8 Completely Unserious Tips To Make Your Cuffing Season A Success
By Ginny Hogan
At 28, Melanie C Was Falling In Love & Reclaiming Her Confidence
By Olivia-Anne Cleary
It's A Pleasure #53: Help! My Boyfriend Won't Tell Me Why He Stopped Going Down On Me
By Sophia Benoit
The Real Reason Your Instagram Story Viewers Show Up In That Order
By Emma Carey
Get Even More From Bustle — Sign Up For The Newsletter