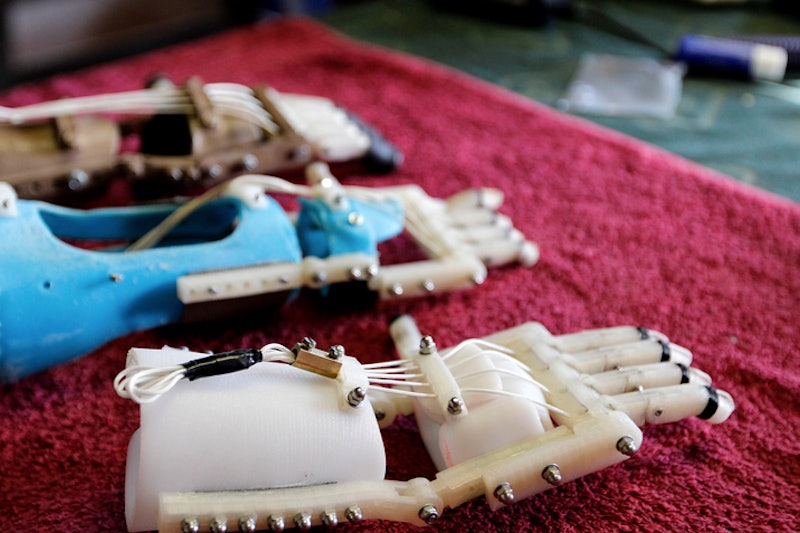 An African carpenter and a Washington puppeteer have joined forces in what must be the most adorable good deed story of the week: designing prosthetic hands for 3-D printers, and fitting 100 children with them for free.

It all started when Johannesburg's Richard Van As lost the use of four fingers when he worked as a carpenter, and knew he couldn't afford the thousands of dollars needed for a prosthetic. He stumbled across a YouTube video of a mechanical hand, courtesy of Washington-based special effects artist (and puppeteer, because that alone wasn't cool enough) Ivan Owen. The two collaborated to create robo-fingers for Van As, who is now happily working once more.

While the two friends were in South Africa, a mother reached out to ask them to help her 5-year-old son, Liam, who was born missing fingers on his right hand. The two rigged up a mechanical hand, complete with fingers that moved with a curl of the wrist. The little guy was said to have responded to his new hand by saying "It copies me!" Take a look at this cute kid:

The Nicest Guys Of All Time were then given a 3-D printer (you can read more that here) by Makerbot. They replaced Liam's original prosthetic with a new and improved "Robohand" (as the two refer to it.) They posted the design online, so that anyone with a 3-D printer and $150 worth of parts could copy their model. Van As then fitted 100 children with their own "Robohands."

For free. Did we mention that a carpenter did it all for free?

They've now updated their original design to create a $5 DIY version, so no more children will ever have to go without hands. (That's it. We've lost it.)