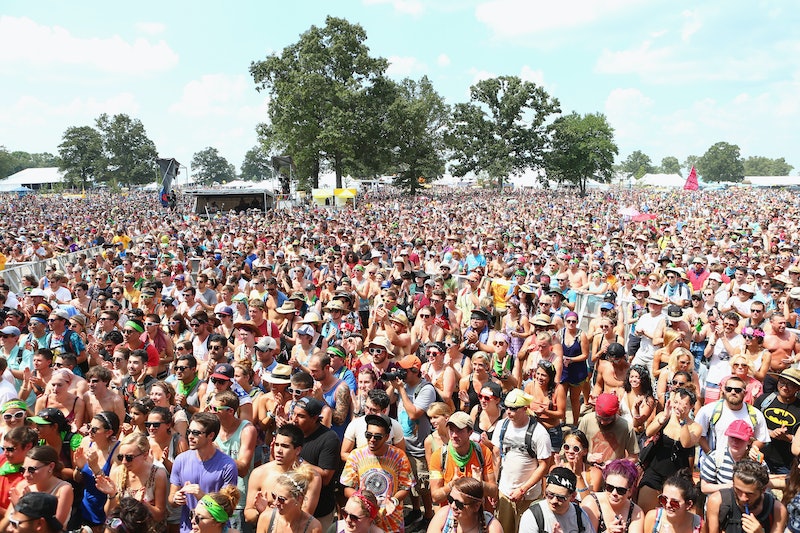 While I have to admit I've never actually been to a music festival that's of the scale that Manchester, Tennessee's yearly Bonnaroo Music Festival is, it's always seemed like an intriguing idea. After all, it's literally just multiple days of nonstop shows from a group of great, diverse artists — what music lover wouldn't like that? And, luckily for those of you who are planning to attend Bonnaroo Music Festival this year, the line-up looks great yet again: According to the festival's website, the full line-up for all 4 days of the show has been released, and with artists like Mumford & Sons, Kendrick Lamar, Florence + the Machine, My Morning Jacket, Childish Gambino, and Hozier on the list, it's definitely not going to disappoint any music fan.

The great thing about music festivals like this one — apart from the fact that there's always a great variety of artists for fans of every genre to enjoy — is also that it's in such a social, energized environment. As someone who has definitely made a transition from enjoying late nights out (college was a strange, coffee-fueled time) to someone who enjoys the beauty of staying in at night as I've grown older, I understand the feeling of missing the occasional late night social-fest that used to be a total norm in all ex-party girls' lives — and music festivals seem pretty much the perfect place to reclaim that feeling, at least for a few days.

It doesn't hurt, either, that the bands in Bonnaroo's line-up are perfect for every ex-party girl:

Sure, former Community star Donald Glover's sound under his musical alias Childish Gambino can get a little thought-provoking and even depressing at times, but he's also got some major bangers that are absolutely fitting of the late, hot messes of nights we all experienced when we moved out of our parents' homes for the first time in our early 20s: Sober and LES are must-listens.

These guys really remind me of a hipster-ified Panic! At the Disco, which was a band that pretty much came preloaded on every party girls' iPod classic playlist back in the early aughts. Consider twenty | one | pilots a must-listen, if only for the nostalgia factor alone.

While AWOLNATION's music isn't exactly one you'd expect to hear at the clubs in the early 2000s — or, really, on any dance floor, ever — it's some songs have a distinctly dubstep, dark sound that is a major trend in the music industry of now. It may not prey upon anyone's nostalgia factor, but it will get you in that badass mood every ex-party girl naturally knows how to rock to the fullest.

Just listen to that song and tell me it doesn't make you want to choreograph a whole dance number around it. (Note, this is a trick question: It's such an infectious, perfect party song, so you won't be able to tell me that!)

Though Jamie xx may not be a well known artist or producer in the states yet, it's likely you know the band he's been a member of since 2005: The xx, responsible for hits like "Islands" and "VCR." Across the pond, though, Jamie xx (real name Jamie Smith) is well known as a remix artist, and has even produced songs for Rihanna, Drake, and Alicia Keys — in addition to and remixing work by Adele and Florence + the Machine. As a solo artist, Jamie xx produces very dreamy, futuristic, music-only tracks: Perfect for dancing, kicking back, and just overall getting lost in.

To check out the entire Bonnaroo line-up, head on over to the music festival's website, right here.