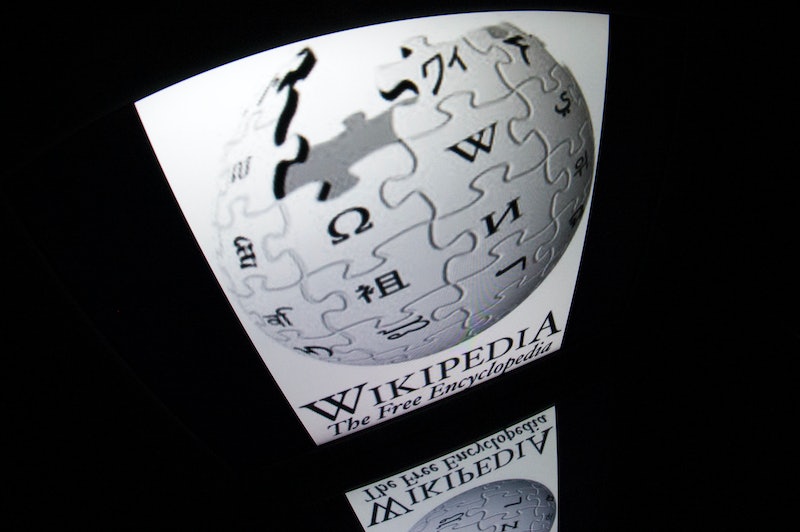 Happy 14th Birthday to everyone's favorite Google result, Wikipedia! It was on this day in 2001 that two guys launched what is now one of the Internet's finest assets. The site was founded in 2001 by Jimmy Wales and Larry Sanger, who chose the name "Wikipedia" by combining the Hawaiian word for "quick" and, obviously, encyclopedia. Stats from Wikipedia's own Wikipedia page report they get around 500 million unique visitors each month. Wikipedia also boasts it's own global network for editors —around 73,000 of them — who review entries for accuracy and update them in real-time to reflect current events. The English Wikipedia contains an astounding 4,695,150 articles, many of which are very, very random and weird.

Wikipedia is an oasis of knowledge, some of it useless, yet still infinitely entertaining. Anyone who has ever gone to "the weird part of Wikipedia" at 2 a.m. knows what I'm talking about: Wikipedia is like your best friend from high school/college — even if you were never quite sure if she was truly a reputable source of information, you rely on her all the time.

So, in honor of 14 years of the vast and ever-growing catalog of useful information, I dug a bit deeper to find a handful of Wikipedia entries that you likely haven't read. So here, without further ado, are the 27 weirdest articles on Wikipedia.

1. A comprehensive list of Las Vegas casinos ... that never opened.

2. A history of The Great Emu War of Australia.

3. An explanation of Graham's Number; a number so large that the entirety of the known universe cannot contain it.

4. A sentence explaining perfect grammar (which makes absolutely no sense).

5. An article on why some pages are labeled "page intentionally left blank."

6. A comprehensive list of those words we use when we can't think of the word. Oh, you know, thingamajigs?

7. A page about the only idiom for daydreaming that you should ever use.

8. An article abut this woman, who has a numerical digit for a middle name.

9. An explanation of The Hum —a cosmic phenomenon that may or may not be a recycled plot from Twin Peaks/The X-Files.

10. Apparently, the Harvard Bridge is measured in smoots.

11. There is actual science behind "new car smell," and this is it.

12. Brushing your hair can cause fainting, according to this page.

13. An article on Jack Black —no, not that Jack Black. This guy was Queen Victoria's personal ... rat catcher?

14. An explanation of the phrase No Soap Radio — the only thing worse than puns.

15. A list of obituaries which were published too soon — i.e. the person wasn't actually dead.

16. A recap of the delightful tale of Owen and Mzee, a hippo and turtle who are BFFs.

17. A list of "Phantom Kangaroos" — accounts of kangaroos appearing in places you would not expect to find them. So, basically anywhere outside of Australia?

18. A page about the legend of the Poe Toaster; someone who shadily visited Edgar Allen Poe's grave, with wine, on his birthday for seventy years — and no one knows who they were or why they kept showing up. (This sounds like a Poe story!)

19. Apparently, one time, the military thought bombs guided by pigeons could be a thing.

20. A list of every exclamation uttered by Batman's right hand man, Robin, in the television series. "Holy _______, Batman!"

21. A list of every Apollo mission that never happened. #MoonFail

22. A post on this woman, who survived not just the sinking of the Titanic, but its sister ship the Britannica as well.

23. An explanation of the real-life inspiration for that running gag on The Simpsons where Bart prank calls Moe's Tavern (I'm looking for Amanda Huginkiss?)

24. An article about a piece of music, composed for piano, that is supposed to be played so slowly that is started playing on a church organ in 2001 — and won't be done until 2640.

25. An article about a disfigured man who accidentally became a horrifying urban legend because he enjoyed taking strolls through his town at night.

26. The comprehensive list of paradoxes that will make your brain hurt.