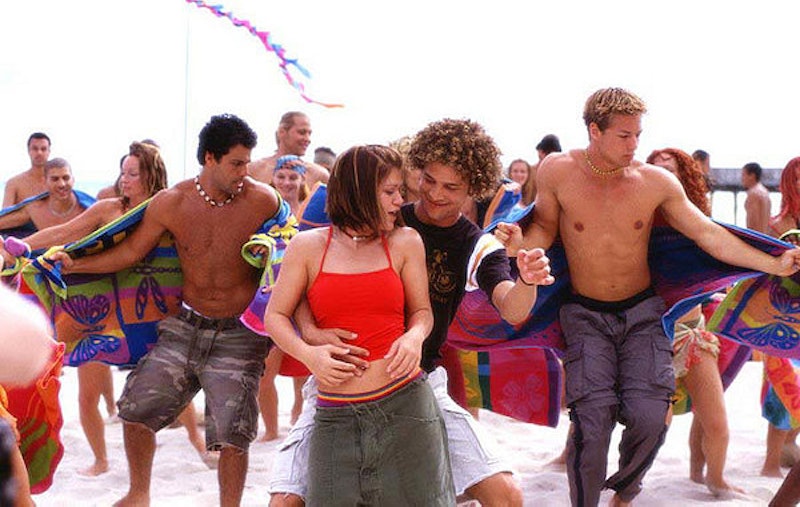 Remember the American Idol movie? That hot second in history when Kelly Clarkson and her highlights and the otherwise forgettable Justin Guarini made a pop musical? Well, I'll understand if you've blocked out that memory, because the film, From Justin to Kelly, is almost impressively bad. And last night I, ever the investigative journalism, relived the trauma to capture its most egregious moments.

If you've never caught this classic film, here's a quick summary: two separate groups of friends (three guys, three girls) have adventures in spring break. Sparks fly in a bathroom between Good Girl Kelly and Party Boy with a heart of gold/hair of brillo Justin. But Kelly's Blonde Party Friend decides to meddle in their barely-blooming relationship for no reason besides the sheer sexual thrill. Misunderstandings occur. Early 2000's covers of K.C. and the Sunshine band happen. Several of my brain cells decide to commit suicide. I think that sums it up.

While it's not on Netflix, you can relive the magic by either watching it On Demand (if you have Verizon Fios) OR spending $2.99 to watch it on YouTube. Mind you, if you're not already getting paid to watch it, it'll be really hard to justify that purchase.

In the meantime, enjoy these chronologically documented timeless quotes, gorgeous screen caps, and amazing lapses in logic from the one, the only, From Justin to Kelly.

"Well when my daddy saw the charges I just told him my therapist’s name is Neiman Marcus.”

Blonde Party Friend asserts she got her bikinis at a high end department store, despite wearing Kirkland brand halter dresses the entire movie.

"Come with us to Miami, we'll lose the entire deposit on our motel!"

The only reason Kelly ends up going is because her friends suddenly need a ride to Miami, so obvi Kelly just bails on her job to help these terrible people.

They drive from Nowheresville, Texas to Miami in a yellow, topless car

Perf for a casual 22 hour drive.

These dudes are just bench pressing at the beach

I've never had a proper Spring Break, but is that like, a thing?

Side note: in no world would a guy who lurks in Xena chatrooms be friends with a guy who's like a terrible off-brand PG-rated version of Stifler from American Pie.

This Cop Gives Promoter Friend a Ticket for No Definitive Reason

It's a running joke throughout, but no matter how many times I re-watch this scene there is no justification here. The cop asks him for identification and then writes him a ticket with zero explanation as to why. Unless being a douchelord with a shell necklace is a fineable offense, in which case, yeah, I feel that.

"No smoking, no drinking, no loud music, and no girls."

Says the only landlord running a nunnery during spring break in Miami. He's, hands down, the only guy I'm really attracted to in this film.

This was the unnecessary battle cry of Blonde Party Friend before she gets stampeded on. It's exactly like what happened to Mufasa, but with more co-eds in neon string bikinis.

"Yeah, my friends call me Kelly for short."

"I'm fine, I just spilt a little punch all over my favorite outfit."

My favorite everyday outfit is also a red-orange bikini and sarong.

It's like she skinned Grimace and made him into a tacky early 2000's handbag.

They wear coordinating white track suits and don't look at each other for hours.

"You overwork him, you treat him like dirt, you don't even pay him overtime."

Waltzing into your boyfriend's place of employment and talking smack to his boss is a ballsy move, especially when you've been dating for like, 30 minutes.

I'm sorry, if you're a pasty white Ginger and you've been through like 21 summers, you should probably know by now that staying in the sun will not make you a "bronzed Adonis."

"My idea of a good time is being with Kelly."

I really just want someone to grab my hands, look me in the eyes, and gently talk me through what kind of horrendous outfit this is supposed to be.

Even though she spends the first five minutes of the film finding different ways to say she's not interested in him. I'm sure there's a deleted scene somewhere of him wearing her clothes, crying, and putting on bonne bell lip smackers while "A Moment Like This" plays in the background.

Stalker Guy and Justin have to score to settle, and the most practical way to do this is via hovercraft. Even though neither of them are dating Kelly, no prize is set, and renting hovercrafts isn't something you can casually do.

"Would you like to join me for an eight course dinner at a five star restaurant?"

Says the guy she just got fired and is now working barely minimum wage filling urinals with ice.

"You have to believe I did NOT mean to hurt you."

Claims this sociopath who just spent an entire week manipulating the guy her friends likes by intercepting phone calls and making out with him.

This is how I talk to all my suitors.

Nerdy Friend spends the entire time looking for this chick he met online when cell phones are a thing.

This cop fines Promoter Friend with hundreds of dollars and then expects him to buy her a drink.

"Lol yeah of course I'll visit you in Texas, Kelly," says Justin, kissing her/his career good bye. They then dry hump each other to "That's the Way I Like It" and I, three chardonnays deep, flip down the computer screen.

More like this
Lewis Hamilton Turned Down A Role In 'Top Gun: Maverick' For This Surprising Reason
By Darshita Goyal
Selena Gomez Has Been Spotted Having Fun With A Top Film Producer
By El Hunt
Naomi Osaka & Emma Raducanu’s Experiences Have Inspired A New Amazon Show
By El Hunt
13 Photos Of Formula 1 Racers Charles Leclerc & Carlos Sainz That Will Drive You Crazy
By Radhika Menon
Get Even More From Bustle — Sign Up For The Newsletter