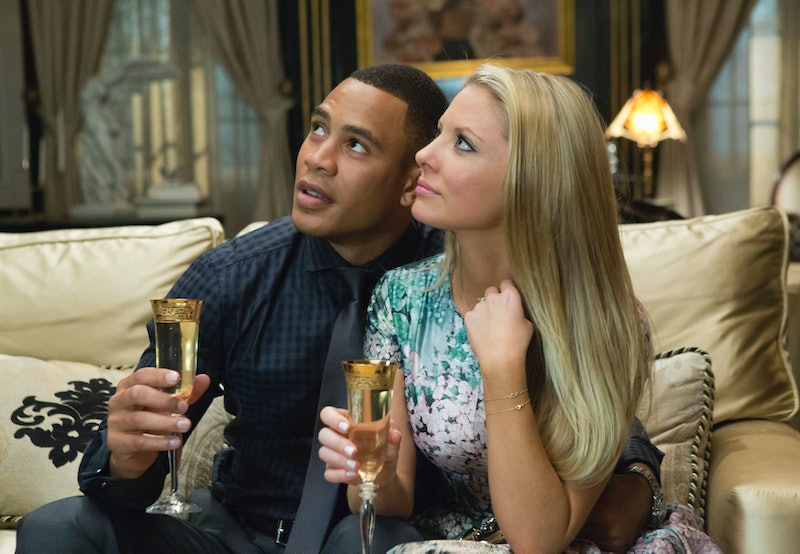 One of the biggest and most exciting storylines on Fox's new hit series Empire is all about the coming rivalry between hip hop mogul Lucious Lyon's sons Jamal and Hakeem and the parents backing each artists (Cookie for Jamal, Lucious for Hakeem). But while the two artists work together and against each other, what about the third brother, Andre? Not only is Andre the eldest and the only brother who has actually ever worked with Lucious to grow and improve the empire, he's also the most diabolical and willing to do anything against his brothers to one day take over for his father. And it helps that his sketchy wife feels the same way. In the pilot of the series, Andre was revealed to be taking pills for some kind of medical condition. And on Wednesday's episode, we saw the consequences of him not "re-calibrating" his meds, which it turns out is because Andre has bipolar disorder. While Andre's wife Rhonda keeps telling Andre to refill his prescription (and even offers some... ahem oral incentive... to encourage him to go to the doctor), it seems like there's more to Rhonda than we've seen so far. In fact, I don't trust her and I think there's good reason for that.

Obviously, Rhonda has been on Andre's side so far in this series. She also seems to want Andre to take over for his father's empire. But could she some kind of ulterior motives? Because at this point, she seems to be calling a lot of the shots but when Andre tries to do something on his own, she doesn't seem to be too happy about it.

Now we can just state the obvious, she's probably just doing everything whatever she can to get Andre on top of the empire's pyramid. She wants Andre to have that throne, and she wants one sitting right next to him. But in the second episode of the series, she throws a line in Cookie's face that Cookie once used to insult her, "Some white girls are smart," and that got me thinking. Is it possible that Rhonda actually has a much more nefarious plan in mind than just seeing her and her husband on top? Could she actually want the empire for herself?

Think about it, she's clearly on top at her field. She's the one who gave Andre the idea to take down his brothers in such a cruel fashion, by tearing his family apart through the two artists. She's the one who has Andre eating out of the palm of her hand through sex and the fact that Andre actually seems to love her. What if Andre's real personality and intelligence comes out the best when he's not on his medication? What if the pills Rhonda wants him to take actually take away the emotions that could actually help him bring his family together? I'm not saying pills shouldn't be used by real people with bipolar disorder, but TV shows often have ways of changing medications' real-world properties to better serve the plot. I just don't trust Rhonda and her insistence on Andre taking medication, since that the show is clearly trying to emphasize this plot point for a reason. The Lyon clan better not underestimate Rhonda or it'll come back to bite them where it hurts the most.