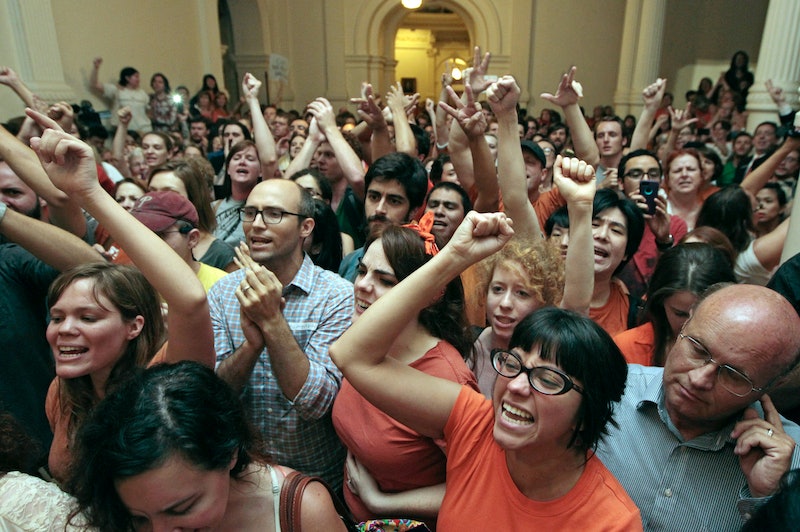 If it wasn't already, Texas is surely shaping up to be the main battleground in the fight for reproductive rights. LAst Friday, Planned Parenthood and 11 other advocacy groups filed a suit against the state in an effort to block Texas House Bill 2, which is due to take effect Oct. 29. House Bill 2 would prevent one-third of health centers in the state from offering abortions, and because of this, plaintiffs say, the law is essentially unconstitutional.

The law “imposes medically unwarranted and burdensome requirements that will dramatically reduce access to abortion in Texas,” the plaintiffs' lawyers said.

The plaintiffs single out two specific provisions of the bill in their complaint. Both of them, they contend, don't provide any medical benefit and thus unnecessarily reduce and restrict women's access to abortions. Here are the provisions the lawsuit takes issue with:

The first challenged provision is the restriction on medication abortion. Under the new law, abortion-inducing drugs (aka medical abortions) can only be administered by physicians before the seventh week of pregnancy. Previously, women could go to the clinic for the first of the pill's two doses and take the second one at a "location of her own choosing."

The plaintiffs address that concern in the lawsuit: Physicians are currently administering the drug in a "medically and scientifically responsible way," they argue, and are prescribing the drug in a way that results in "a lower rate of ongoing pregnancies and requiring fewer surgical interventions to complete the procedure."

The new procedure for medical abortions means that instead of making two visits to a clinic, Texas women will now have to make four. Texan women already have to undergo a 24-hour waiting period after their first visit to the clinic, which involves a "mandatory, state-directed counseling session" and an ultrasound system. Trips two and three would then be made just to receive the two doses of the drug. The fourth visit would entail a new mandatory follow-up, 14 days after the second dose. For women who have to take off work, don't have a clinic nearby, or don't have reliable transportation, this is a significant obstacle.

The narrowed time-window is also problematic: According to the lawsuit, medical abortions are typically available through 63 days — HB2 reduces the pill's availability to 49 days. (Most women don't know they're pregnant until they miss their period, which could be a month or more after conception.)

Most physicians who perform abortions don't have these admission privileges, simply because it's not usually necessary: According to Planned Parenthood, less than one-half of one percent of patients seek hospital care following an abortion. The provision would also mean that clinics need to be within 30 miles of a hospital, which many clinics simply are not.

The lawsuit points out that a lot of doctors who provide abortions work at different clinics, traveling between them on different days. To get admission privileges at one hospital would be difficult enough — more than one would be extremely challenging within the time constraints of the bill's effect date.

Another requirement of the bill (not taken issue with in the lawsuit) would also force clinic closures: Under the new legislation, clinics would have to provide facilities that meet the guidelines of an outpatient-surgical center. The expense of transforming centers to meet these requirements would cost millions, and the legislation includes medically-unnecessary regulations, such as requirements about how wide hallways should be.

What Would HB2 Mean For Women in Texas?

When it comes down to it, there's simply not enough time for facilities to meet all the new restrictions by Oct. 29 — and not complying means that physicians who continue to provide abortions will lose their licenses. With fewer physicians to provide abortions in the remaining two-thirds of centers, the lawsuit alleges, women will have to wait longer for abortions, which inherently increases the risks of the procedure, and might push them over the deadline for termination.

The closure of the centers means that women in the cities of Lubbock, Waco, Killeen, Harlingen, McAllen and Fort Worth will have nowhere to go for an abortion in their own town. One in 12 women will have to travel more than 100 miles to get abortion care.

It also means that women who need the clinics for reasons other than abortions (such as routine exams, birth control access, and even cancer screenings) will no longer have anywhere to go — a significant blow to women's health that compounds the effects of the termination of the Texas Women's Heath Program last year, wrote Planned Parenthood President Cecile Richards in a Huffington Post op-ed.

Since the end of the program, Richards wrote, 130,000 Texas women are currently without medical care. That significant — and scary — number forms part of a population of a state that already doesn't do well by its women: According to a recent report by the Center for American Progress, Texas was one of 10 states in America to receive an "F" for women's health, and ranked 45th for the overall state of women.

"The American Congress of Obstetricians and Gynecologists, the Texas Medical Association and the Texas Hospital Associations all agree that provisions in this bill will put women's health and safety in danger — leaving some to resort to desperate and dangerous measures," Richards wrote.

There is a chance that the plaintiffs will be successful, as precedents for similar cases have already been set in Alabama, Mississippi, North Dakota and Wisconsin. Judges in those states ruled that new requirements constituted a "substantial burden" for women seeking abortions.

House Bill 2 was passed July 18 in a (democratically questionable) special Senate session, and is considered the most sweeping anti-abortion legislation in the nation. Eighty percent of Texans didn't want the abortion bill to be voted on during the session, and 63 percent were against expanding restrictions on abortion.

The plaintiffs will also file additional paperwork next week to block the bill's effective date of Oct. 29.

“We’re in court today to stop a terrible situation for women in Texas from getting even worse,” Richards said. “If this law goes into effect, there is no doubt it will end access to safe and legal abortion for many women. We won’t let that happen.”