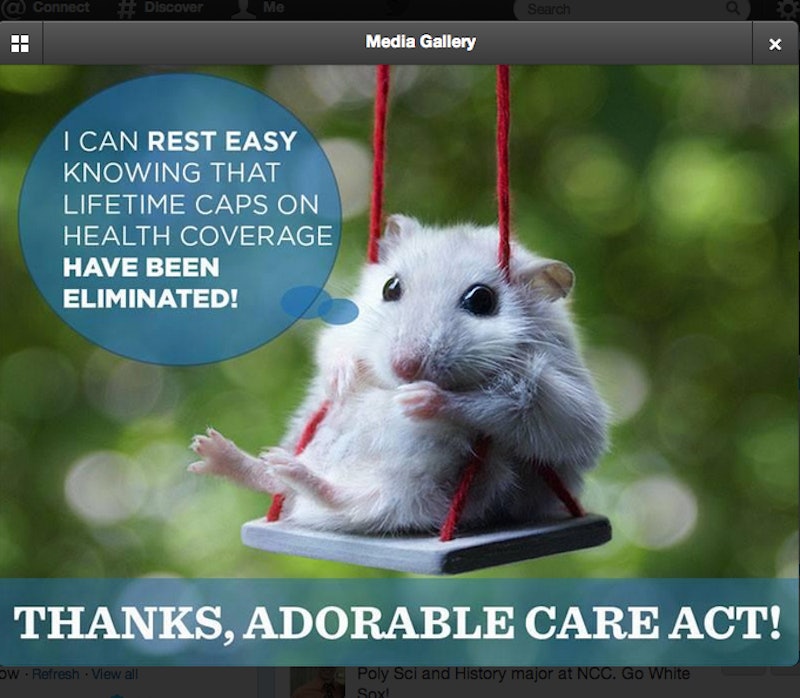 Why support the Affordable Care Act? Um, because a dormouse on a swing, says the White House.

As the administration prepares to roll out the most fundamental change to American healthcare policy in a half-century, its proponents have issued a series of simplistic, gently-chiding campaigns to attempt to convince the American public — particularly those very-necessary millennials — to support the move. Meanwhile, the Republican Party (when it's not essentially blackmailing the administration to delay Obamacare) has gone the other way: harsh, doomsday-themed advertisements essentially suggesting that Obamacare will mark the downfall of the world's last free nation.

In courting millennial support, the Obama administration's belief seems to believe our generation is most fond of baby animals (maybe they checked BuzzFeed's stats?), while conservative groups seem to be banking on the fact that we're easily turned off. Let's take a moment to compare the two approaches, shall we?

That dormouse is resting easily.. but so is Uncle Sam, in your gynecologist's office. Here's a deeply disturbing video from the Republican group "Generation Opportunity," which features a mesmerizingly creepy Uncle Sam peering into a millennial's hoo-ha. (There are male and female-themed videos, in case the violation of one sex wasn't enough.)

Seriously. Look at it.

The Daily Show pointed out this week that he looks eerily like that guy who tells us to buy burgers:

But it's OK, says the White House, calmly. The Act won't leave your freedom in tatters and usher in the rise of socialism. It won't bankrupt your family or remove your capitalist liberties. Because, baby pandas!

Still, listen to Tricia, a cancer survivor, forewarns the GOP. She knows what she's talking about. “Obamacare is dangerous," insists Tricia. "It can’t be implemented...Your well-being, judged by a bureaucrat in D.C., is devastating.”

The Kaiser Foundation (Obama's side) counters with the cutesy YouToons, who look just like you, only adorable and tiny. Because it's well-established that only a small chunk of Americans actually understand Obamacare, the YouToon characters run around little maps illustrating exactly what's going on. In this PSA, Uncle Sam is far less creepy, and the world as we know it doesn't end in a ball of communist flames.

There's even a moment at the beginning that touches on the ridiculousness of the 2012 "Mayan apocalypse", which is probably a dig at Republican fear-mongering.

The Heritage Foundation hits back with a BuzzFeed-like explanation of how Obama has let everybody down, and the Act is "totally wrong." It uses a lot of memes to make its point, because we're all meant to feel like Tyra Banks on a bad day when it comes to Obamacare.

And even Boy Meets World and Mean Girls aren't into it, the article continues...

... well, whatever, responds the White House, because KITTENS.

You guys, this is what the world has come to.