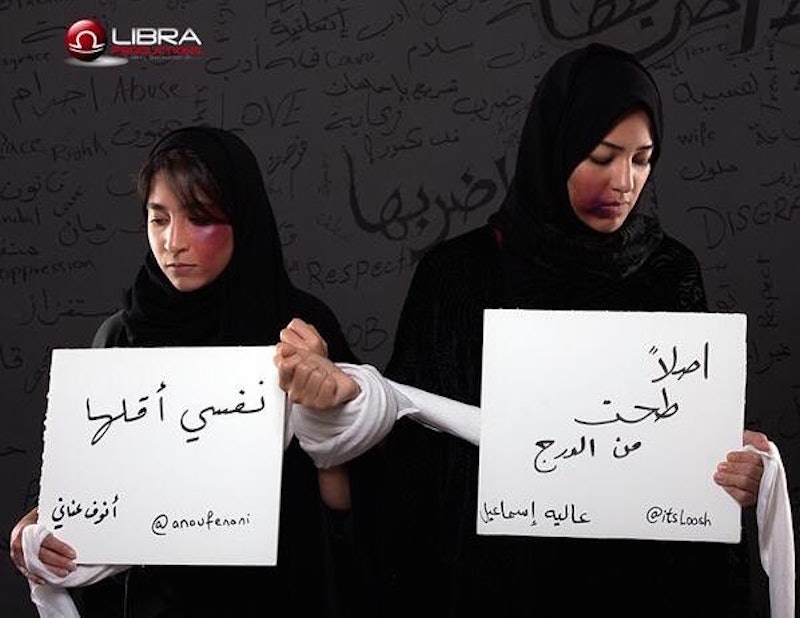 What happens when you tell millions of Twitter users to try and hit a woman? A new campaign, organized by young Saudis, uses hashtag #hither (#اضربها in Arabic) to post cheeky tweets daring men to stop lashing out–and calling for an end to domestic violence. Music-management company Libra Productions is sponsoring the campaign and helping to produce creative photos to match the tweet outpour. A month ago, Saudi Arabia launched its first ad campaign against domestic abuse, the No More Abuse campaign organized by the non-profit King Khalid Foundation. The ad, showing a woman in a niqab with a black eye, was super-striking, and led to a significant public response–notably drawing lots of young men to the cause.

Domestic violence goes grossly unreported in the country, as Saudi law still considers women to be men's wards. Check out some samples of the Twitter storm:

More like this
Iran Has Issued A Death Sentence Over Mahsa Amini Protests
By Catharina Cheung, Darshita Goyal and Maxine Harrison
Read Dan Levy's Heartbreaking Message After The Club Q Shooting
By Stephanie Topacio Long
Amanda Gorman Shared A Powerful Message On Meghan Markle’s Penultimate Podcast
By Darshita Goyal
10 Thanksgiving Alternatives You Can Celebrate This Month
By Katie Mitchell
Get Even More From Bustle — Sign Up For The Newsletter