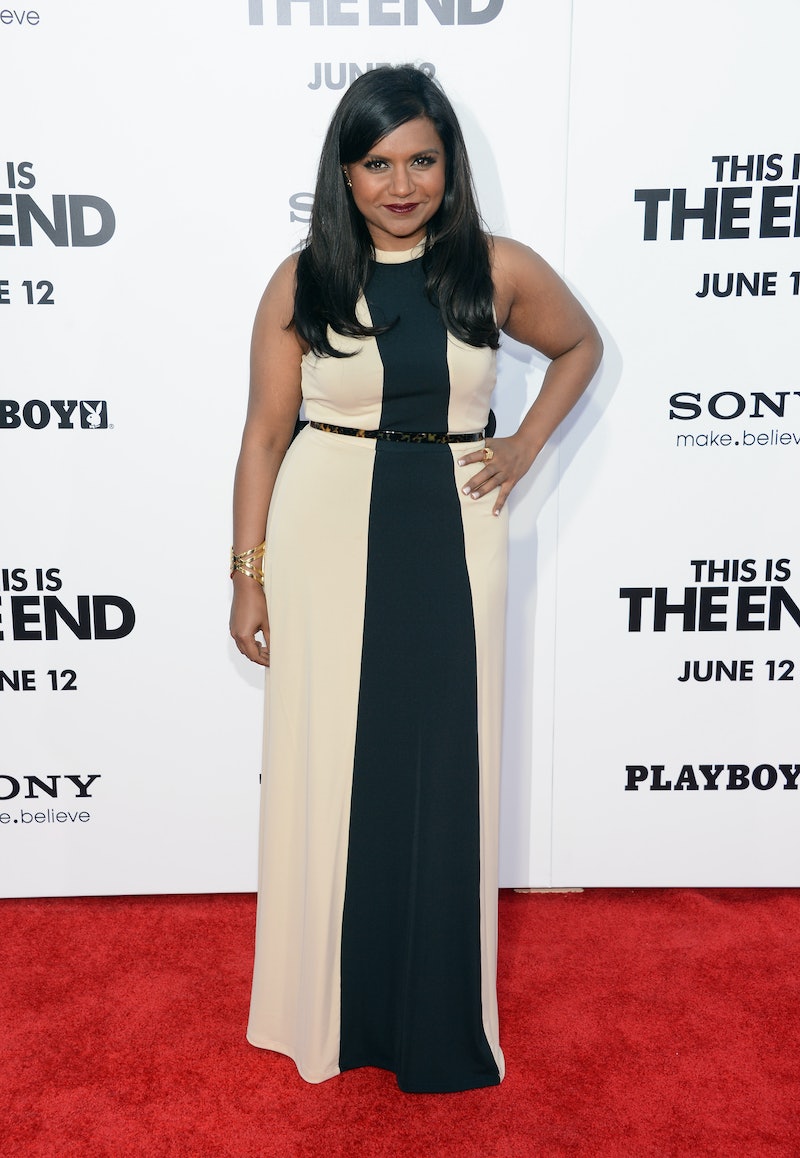 Per usual, Mindy Kaling has said something interesting. In an interview for the cover of the Sept. 29 issue of Parade magazine, Mindy Project star/creator Kaling talked body confidence, and the massive attention she gets for her appearance.

“I always get asked, ‘Where do you get your confidence?’" she said. "I think people are well meaning, but it’s pretty insulting. Because what it means to me is, ‘You, Mindy Kaling, have all the trappings of a very marginalized person. You’re not skinny, you’re not white, you’re a woman. Why on earth would you feel like you’re worth anything?’”

Kaling continued: "There are little Indian girls out there who look up to me, and I never want to belittle the honor of being an inspiration to them. But while I'm talking about why I'm so different, white male show runners get to talk about their art."

The idea that female celebrities are asked less-important questions than male ones isn't anything new — just ask Scarlett Johansson, whose takedown of a reporter's sexist questions has become famous on Tumblr. But Kaling brings up another good point: why is a woman's confidence always under interrogation?

If a smart, successful man is confident, no one questions it; rather, it's expected. Yet when a smart, successful woman is confident, it's assumed that something must've happened to boost her self-esteem so high. She must've been bulled in high school, or treated badly by boyfriends, or suffered some other trauma that, eventually, allowed her to believe in herself. Her confidence can't just be a regular character trait, because that would imply that she never questioned it. And how could she not? Women aren't naturally self-confident, society says, because there's simply too much wrong with them for that to be possible.

This is the standard set for all women, but celebrities face it constantly and publicly. Famous women who aren't model-thin or beautiful by conventional Hollywood norms are given an extra third degree by the press, relentlessly questioned over "the reason" for of their confidence or "the development" of their self-worth. Women like Kaling and Lena Dunham, a fellow talented female who happens to be a few dress sizes bigger than most TV actors, get asked more frequently about their body weight than their accomplishments.

Kaling is the first Indian-American to create and star in a TV sitcom, but in interviews, this enormous achievement gets a one-line mention while half a page gets devoted to "how brave she is" for appearing on TV looking as she does. The same goes for Dunham, who's breaking barriers as a 27-year-old, average-sized showrunner and star of a hit series. People talk about her career, but not nearly as much as they analyze the root of her confidence.

It's great that these talented women are getting recognized, but far more attention should be going to their successes than their weight. That's not to say their unique (by Hollywood standards) appearances shouldn't be noted; as Kaling pointed out in the Parade interview, she is a role model, and it's important that fans realize that normal-looking people can appear on TV.

Yet when smart, groundbreaking women are asked more questions about their confidence than their art, their views on society, or practically anything else, it makes it seem like these things are secondary and unimportant compared to their appearance. This is a terrible message for fans to receive, and it can't make Kaling and Dunham feel too great, either. Let's give these women the respect they deserve and ask them the questions that matter.