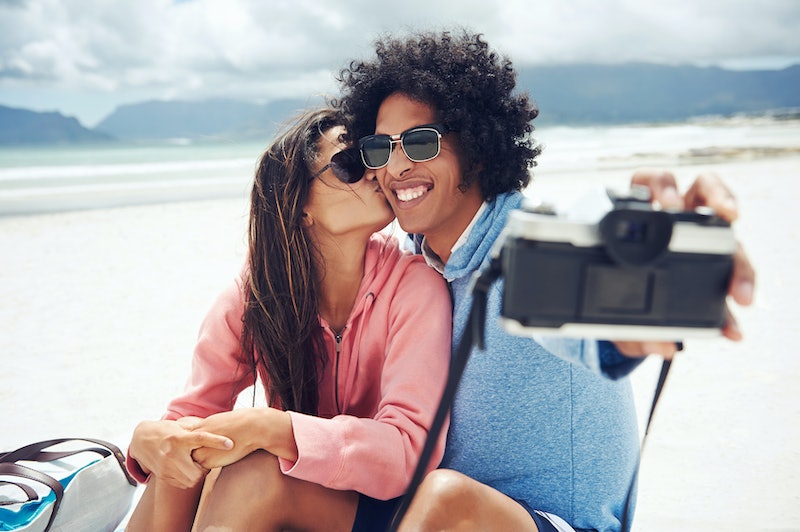 If you haven’t already read it, you’ve probably at least heard about the New York Times “Modern Love” column that’s been taking the Internet by storm this week. Written by Mandy Len Catron and titled simply, “To Fall in Love, Do This,” it describes Catron’s attempts to recreate the results from psychologist Dr. Arthur Aron’s 1997 study, “The Experimental Generation of Interpersonal Closeness.” Can you make two people fall in love? As it turns out, yes — you can. Apparently, all you have to do is sit two people in a room together and have them ask each other 36 questions.

Aron’s research involved pairing volunteers — heterosexual men with heterosexual women — and having them enter the lab through different doors. Over the course of the next hour or so, the pair of volunteers sat opposite each other while making their way down a list of 36 “getting to know you”-type questions. The questions were simple to start — innocuous, even: Things like, “Given the choice of anyone in the world, who would you want as a dinner guest?” and “Name three things you and your partner appear to have in common.” They were presented in three sets, however, and the participants worked their way down each set, the questions became more and more personal: “What is your most terrible memory?” and “How do you feel about your relationship with your mother?” from set II; “Complete this sentence: ‘I wish I had someone with whom I could share…’” and “If you were to die this evening with no opportunity to communicate with anyone, what would you regret not having told someone? Why haven’t you told them yet?” from set III; and finally, as a conclusion, “Share a personal problem and ask your partner’s advice on how he or she might handle it. Also, ask your partner to reflect back to you how you seem to be feeling about the problem you have chosen.” Then, after all of the questions had been asked, the participants stared into each other’s eyes without speaking for four minutes.

Six months later, one of the pairs of volunteers had gotten married.

So, then: To "Modern Love." After a bad breakup, Catron remembered the study and spoke about it to one of her male friends. He suggested they try it, so they Googled the questions and spent the next few hours asking and listening. Catron acknowledges that their “experiment” obviously isn’t a direct recreation of Aron’s; they were in a bar, not a lab, and they weren’t total strangers. But you know what? It didn’t matter; it worked anyway. She doesn’t specify whether they’re still together, and she notes that they probably can’t credit the study for their relationship entirely — but something about it opened the door for it to happen in the first place. Wrote Catron:

“We all have a narrative of ourselves that we offer up to strangers and acquaintances, but Dr. Aron’s questions make it impossible to rely on that narrative. Ours was the kind of accelerated intimacy I remembered from summer camp, staying up all night with a new friend, exchanging the details of our short lives. At 13, away from home for the first time, it felt natural to get to know someone quickly. But rarely does the adult life present us with such circumstances.”

These questions — this whole “method” of falling in love — they create those kinds of circumstances, which might seem like magic, but which is, in truth, as human as it comes. I think Ellie Krupnick at Mic hit the proverbial nail on the head when she wrote that the 36 questions aren’t really about falling in love: “They’re about building intimacy.” This is what Catron was talking about when she concluded, “Love didn’t happen to us. We’re in love because we each made the choice to be.” How you and your partner answer these questions is as important as the questions themselves — that is, you both have to enter into the whole thing openly and willingly. That’s where the magic lies: Making the opportunities for yourself, rather than just waiting for them to come along of their own accord.

I haven’t performed the experiment myself, but I have seen it in action. In my other life, I’m a theatre director — and these questions are exactly the sorts of exercises I’m constantly doing with my actors in order to build relationships between them both as real people and as characters. How do you create the sort of intimacy characters who have been married for decades have in a way that’s absolutely believable when your actors have only known each other for a few weeks? You seat them across from each other — ideally on the floor, cross-legged, with their knees touching — have them do anything from asking these sorts of questions to each other in character to playing out an actual scene, and have them look each other square in the eye without speaking. Good actors, once they’ve located where that kind of intimacy “lives,” will be able to recall it once you add in all the other elements of the play: Lines, staging, costumes, sets, lights, sound, and all that jazz. But the core of the whole thing is always that relationship — what you feel with someone when you’re sitting across from them and everything else about the world fades away.

But here is where the analogue ends, because after a show closes, the actors tuck those characters and their relationship away and everyone moves on to other things. Not so with real life relationships; as Tracy Moore wrote over at Jezebel, “Of course, compared to the work ahead of it, then, falling in love is actually the easy part.” After that, you have to put in all the work required not only to maintain the relationship, but to keep developing it. That’s the thing about relationships: They change over time. After the initial falling-in-love phase, Moore continued, “What matters next — the sticking with it, the following through, the renewed commitment to it day in and day out to keep knowing, and keep being known — well, unfortunately, that could never be solved by a questionnaire.”

These 36 questions? They’re a good starting point for a relationship — potentially a great one, even. But they can only take us so far; after that, we’re on our own. Even so, though, we’re not lost without a map — because once we leave those questions behind, we can still use them as our North Star. If we can see where we’ve been, then we can forge on ahead to wherever we might be going — and wherever the future may lie.

1. Given the choice of anyone in the world, whom would you want as a dinner guest?

2. Would you like to be famous? In what way?

3. Before making a telephone call, do you ever rehearse what you are going to say? Why?

4. What would constitute a “perfect” day for you?

5. When did you last sing to yourself? To someone else?

6. If you were able to live to the age of 90 and retain either the mind or body of a 30-year-old for the last 60 years of your life, which would you want?

7. Do you have a secret hunch about how you will die?

8. Name three things you and your partner appear to have in common.

9. For what in your life do you feel most grateful?

10. If you could change anything about the way you were raised, what would it be?

11. Take four minutes and tell your partner your life story in as much detail as possible.

12. If you could wake up tomorrow having gained any one quality or ability, what would it be?

13. If a crystal ball could tell you the truth about yourself, your life, the future or anything else, what would you want to know?

14. Is there something that you’ve dreamed of doing for a long time? Why haven’t you done it?

15. What is the greatest accomplishment of your life?

16. What do you value most in a friendship?

17. What is your most treasured memory?

18. What is your most terrible memory?

19. If you knew that in one year you would die suddenly, would you change anything about the way you are now living? Why?

20. What does friendship mean to you?

21. What roles do love and affection play in your life?

22. Alternate sharing something you consider a positive characteristic of your partner. Share a total of five items.

23. How close and warm is your family? Do you feel your childhood was happier than most other people’s?

24. How do you feel about your relationship with your mother?

25. Make three true “we” statements each. For instance, “We are both in this room feeling …”

26. Complete this sentence: “I wish I had someone with whom I could share …”

27. If you were going to become a close friend with your partner, please share what would be important for him or her to know.

28. Tell your partner what you like about them; be very honest this time, saying things that you might not say to someone you’ve just met.

29. Share with your partner an embarrassing moment in your life.

30. When did you last cry in front of another person? By yourself?

31. Tell your partner something that you like about them already.

32. What, if anything, is too serious to be joked about?

33. If you were to die this evening with no opportunity to communicate with anyone, what would you most regret not having told someone? Why haven’t you told them yet?

34. Your house, containing everything you own, catches fire. After saving your loved ones and pets, you have time to safely make a final dash to save any one item. What would it be? Why?

35. Of all the people in your family, whose death would you find most disturbing? Why?

36. Share a personal problem and ask your partner’s advice on how he or she might handle it. Also, ask your partner to reflect back to you how you seem to be feeling about the problem you have chosen.