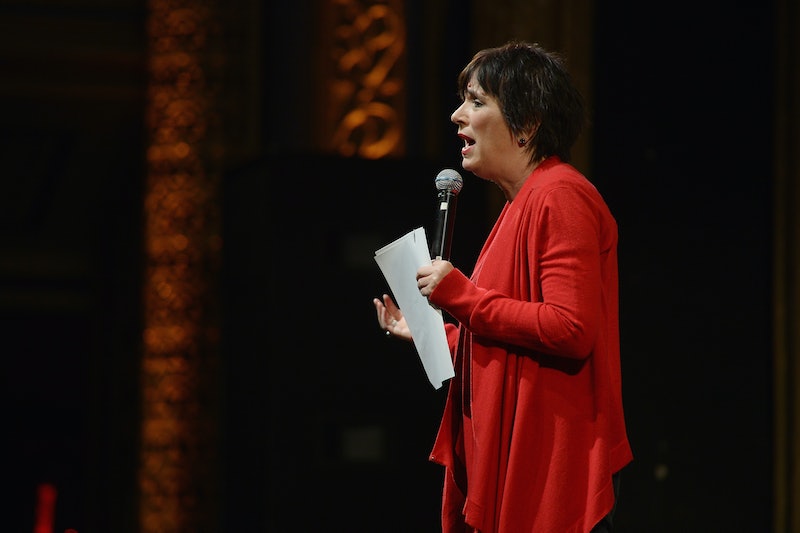 "The Vagina Monologues" by Eve Ensler has been a staple of college feminist groups for years, but women's college Mount Holyoke has decided to retire "The Vagina Monologues," though the play was once an annual event. The reason? That the play is not inclusive enough, especially when it comes to trans women. Which really is a good point.

The Mount Holyoke Theater Board announced their decision in a school-wide email. “At its core," the email explains, "the show offers an extremely narrow perspective on what it means to be a woman." They add, "Gender is a wide and varied experience, one that cannot simply be reduced to biological or anatomical distinctions, and many of us who have participated in the show have grown increasingly uncomfortable presenting material that is inherently reductionist and exclusive."

"The Vagina Monologues" was first performed in 1996, and while it was arguably extremely important and valuable for its time, the world of feminism has come a long way since. Today, our understanding not just of womanhood but also of gender has evolved well beyond the notion that genitalia has any ability to define gender, an idea that the Theater Board email rightly identifies as "reductionist." Conflating womanhood with vagina-having is not only incredibly harmful for women who don't have vaginas — the reasons for which could be many — but also does a disservice to the complexity of gender identity, which goes so far beyond genitalia.

For instance, if I was suddenly transported into a male body, I wouldn't stop being a woman. Because my gender identity is not an expression of my genitalia but a part of who I am as a person.

This is a concept so simple that even the high-art phenomenon of body-swap movies are able to understand it.

Never-the-less, "The Vagina Monologues" are a classic feminist work and reaction at Mount Holyoke has been mixed. Commenter on the message board Holyoke Confessional wrote, "I love how people who have never been able to discuss or embrace their vaj-wahs aren’t going to find an avenue here, either, since female-validating talk about vaginas is now forbidden. That’s so misogynistic under the guise of ‘progress.'"

However, another student argued, "we can't present a show that is blatantly transphobic and treats race and homosexuality questionably, when one of the conditions of getting the rights to the show is that you can't critique it or alter it.”

The Theater Board has decided to replace "The Vagina Monologues" with student written monologues performed in the same style of the original.

On an interesting, and possibly related note, this is the first year that the all-women Mount Holyoke has allowed all applicants who identify as women to apply, regardless of their anatomy or the gender listed on their official documents.

As our understanding of gender and of feminism continue to grow and evolve it is only natural that works which were valuable and revolutionary in their day will no longer have the same power or relevance. As feminism continues to seek to be more intersectional, it is not only right but natural for works that only consider one axis of oppression will begin to fall to the wayside, to be replaced by works that better convey the messages that are right for the moment. "The Vagina Monologues" will probably always be a notable feminist work, but nowadays it isn't one that needs to be performed annually.