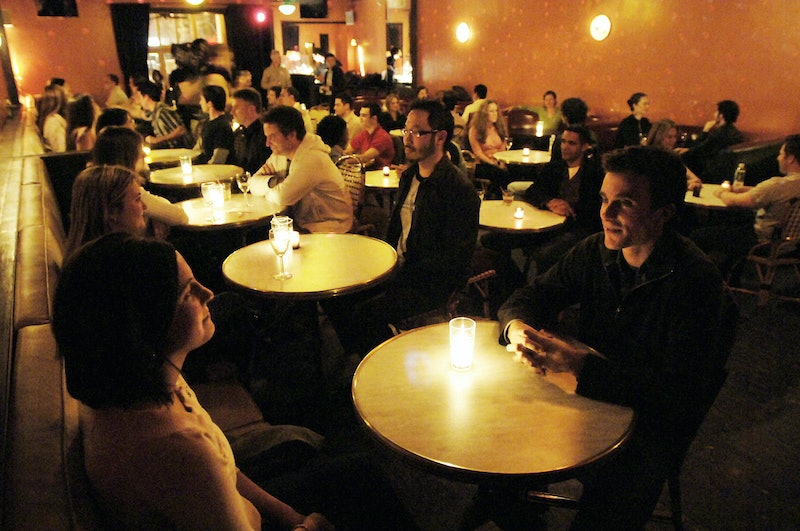 Slate's advice columnist Troy Patterson the "Gentleman Scholar" tackles some pretty serious questions for the "modern gentleman" like "can gentlemen wear fur," "how should gentleman wear sideburns," and "how do I sext like a gentleman" (answer: you don't). In his most recent set of the responses, Patterson, who presumably considers himself Head Gentleman in Charge, answered the following question submitted by a Slate reader:

What responsibility for discretion does a gentleman have for former romantic partners? I had a four-year relationship with a woman that ended several years ago. We have remained friends and talk every few months. We both know more than a few things about each other's relationships—both before and after we were a couple. When I talk about feelings and relationships with new women whom I date, I sometimes want to use events from my ex’s life for examples to help explain. Part of me does not want to share things that my ex might justifiably believe are not the business of my new partner. But part of me feels bad about withholding information from my new partner. Where to draw the line?

Patterson's response was essentially: yeah, bro, you're good, and encouraged him to talk about his ex with his current partner because his heart was in the right place. Nowhere did he mention the most important thing that all people should do if they're trying to be responsible in a committed relationship which is to actually ask his partner her thoughts on the topic. For example, can he talk about exes openly? Does it make her uncomfortable? Is there a certain context in which he can and can't bring them? How much of his past relationships should he be able to use to define his current relationship?

Patterson says that there's an "internationally-recognized Don’t Ask, Don’t Tell policy on exes" but I would disagree. Everyone has a really different standpoint on talking about (and hearing about) past relationships from their current partner. I, for example, have absolutely no qualms listening to people talk about their past relationships and loves, even if my current partner talks about them fondly, because I think those people are integral in shaping my partners' current self and outlook on the world and, more importantly, on relationships. Here are some different examples of people you may date and their stance on exes:

The "Don't Compare Me to Your Ex" Stance

I once briefly saw a girl whose only rule when it came to talking about exes was that as long as I didn't compare her to anyone else I had been involved with or dated seriously, talking about exes was totally fair game. This was pretty easy for me to work with, since I generally avoid saying things that are common sense to avoid saying like "the sex was better with her, but you've got a great personality!" It's not that hard to avoid comparisons; besides, it's probably best to only get romantically involved with people who have their own strengths and shining personality, not just one you'd want to compare to an exes'.

Sometimes, people don't really like it when you talk about someone from your past that you had deep, deep feelings for, but don't mind you sharing stories about casual flings, friends with benefits, and one-night-stands, because they didn't mean all that much anyway, and it's much harder to be pitted against a past lover than it is a past sexual partner. When I have come across this kind of situation, I always respect my partner's wishes to leave serious relationships out of the conversation. There's no reason to cause discomfort or insecurity in someone you care for.

And then there's the opposite approach — not talking about how many people you've had sex with but having more freedom to talk about serious relationships because your partner can't or doesn't want to picture you getting hot and heavy with someone else. This stance is even easier to honor than the last. I can brag about how many girls I've slept with to all the boys who will then proceed to feel threatened by it, I don't really need to do it with my partner.

The "It's Up To You" Stance

This one's a little trickier, because while your partner may leave it up to you to use your own discretion when talking about exes, it's important to gauge their reaction and what may make them uncomfortable when you do. Though the onus shouldn't be entirely on you to guess what they mean by "it's up to you" (because last I checked, it meant exactly what it purports to mean), offer to work with your partner by asking them questions about what's OK and what's not. Yay, communication!

While I would definitely consider this if anyone asked me to do it, I don't think it's fair for a partner to completely restrict the way you speak because of a preconceived notion they might have about what YOU'RE thinking when you talk about an ex. It's possible to have a healthy, loving, passionate relationship with someone and still care about someone else you may have been with in that capacity.

I'm all about saying what you want, when you want it. I'm also all about compassion and kindness and trying to conflate independence with respect for how others feel. There are many iterations of communication within the stances I suggested, and it's important to remember that talking about exes is always worth more of a discussion than just acceptance of the alleged universal "don't ask, don't tell" policy. With a little communication and compromise, everything can work out.