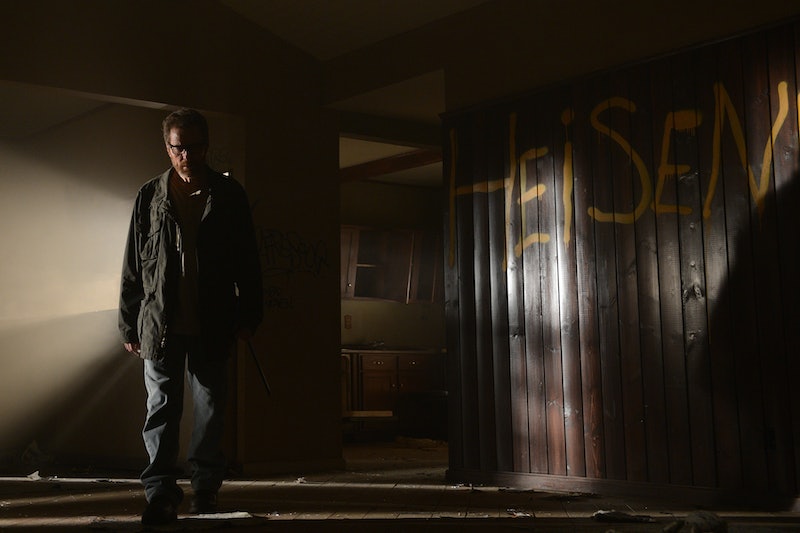 Back in Breaking Bad's pilot, Bryan Cranston's Walter White told students why he was interested in chemistry. For, you see, while chemistry is the study of matter, it is also "the study of change," according to the high school teacher. "That's all of life, right?" Mr. White told a classroom. "It's the constant, it's the cycle. It's solution, dissolution. Just over and over and over. It is growth, then decay, then transformation." And, certainly, throughout Breaking Bad's five-and-a-half seasons, we saw Walter's speech play out: The cancer-addled teacher grew to have a backbone and decayed into a vengeful meth kingpin whose pride was only more dangerous than his murdering habits. But, in the critically acclaimed AMC series' finale, did Walter White truly transform?

In a way, yes. (And the requisite SPOILER ALERT here for those of you who haven't seen the last episode.) In the series finale, Walt did in fact die — but did in fact redeem himself. After ensuring that his son, Flynn, would walk away with his $9 million in cash — thanks to some intimidation directed at Gretchen and Elliott — Walt died by his own hand, having murdered the neo-Nazis that killed Hank and stole his money. But Walt still managed to save Jesse along the way, shielding the long-suffering meth maker from Heisenberg's own firepower. But how did Breaking Bad's fans feel about the finale? Well, it seemed everyone was as happy as Badger and Skinny Pete being handed $200,000.

More like this
Lisa Kudrow Explained How Her Body Image Changed While Filming 'Friends'
By Grace Wehniainen
Netflix Reveals First Look At Wednesday In The 'Addams Family' Spinoff Series
By Bustle Editors
Josh Peck Shows Love To Jennette McCurdy After Her Shocking 'iCarly' Revelations
By Radhika Menon
At 14, D'Arcy Carden Was Sneaking Out To Parties & Crying Over Kurt Cobain
By Ivana Rihter
Get Even More From Bustle — Sign Up For The Newsletter