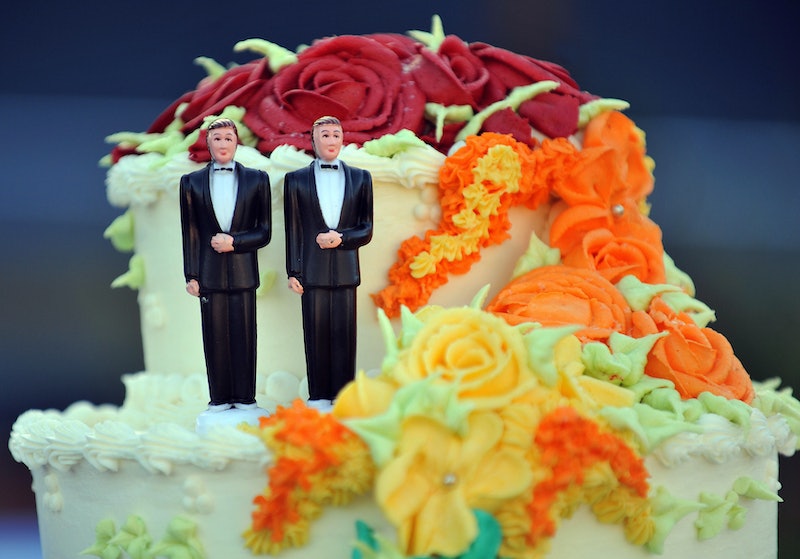 After years of near misses and back-and-forth rulings in the lower courts, the Supreme Court will finally rule whether same-sex marriage is legal in all 50 states. Late Friday afternoon, the justices announced that they would consider four of the cases contesting state bans on same-sex marriage, consolidating them together into one day of oral arguments. Hopes are high that the country’s highest court could, in one fell swoop, grant legal status to same-sex couples in the remaining 14 states and make it clear that the right to love and raise a family with whom you choose shouldn’t vary from state to state and family to family.

The stakes for the case are high, but the prospect of getting a favorable ruling from the unpredictable, cautious Court is a good one.

The cases before the Court came from Ohio, Kentucky, Tennessee and Michigan — four states of the 14 who continue to ban same-sex marriage. Many of these states in favor of limiting marriage to a man and a woman also passed laws refusing to recognize the same-sex marriages performed in other states. Oral arguments will be held in April, and legal analysts consider it likely that we will have a decision before the Court’s term concludes in June.

Seeking a national dispensation declaring bans on same-sex marriage unconstitutional, the plaintiffs argued that refusing to grant LGTBQ couples the legal rights and privileges of marriage also indicated that society did not see their relationships as legitimate. As the plaintiffs in the Kentucky case wrote in their petition to the Supreme Court:

Even those who have been validly married in other jurisdictions cannot enjoy the rights, responsibilities and privileges of married life that their heterosexual counterparts enjoy. In addition to these concrete deprivations, Kentucky’s marriage prohibition marks same-sex relationships and the families they create as less valuable and less worthy of respect than opposite-sex relationships.

By considering the four cases in conjunction, the Court has decided to take up two specific legal questions: first, does the 14th amendment require that a state must grant a marriage license to a same-sex couple and second, if not, then must a state recognize a same-sex marriage that was legally performed in another jurisdiction?

The Fourteenth Amendment guarantees equal protection under the law to all, regardless of race, class, gender or sexual orientation. In recent years, a number of lower courts have made explicit reference to the 14th amendment’s clause guaranteeing equal protection under the law when ruling in favor of same-sex marriage; the Supreme Court, however, has largely evaded the question of discrimination when it comes to same-sex marriage and preferred instead to decline to take cases or to decide them on more technical grounds.

The notable exception to this precedent was the 2013 United States v. Windsor decision that gutted the Defense of Marriage Act and ruled that same-sex couples who were legally married could not be denied the federal benefits enjoyed by heterosexual couples. To deny same-sex couples equality under federal law was “a deprivation of the liberty of the person protected by the Fifth Amendment.”

While the decision had no sway over how the individual states shaped their marriage laws, the Windsor case sparked an overwhelming trend in the lower courts towards marriage equality. “In a remarkable and largely unbroken line of more than 40 decisions, state and federal courts relied on the Windsor decision to rule in favor of same-sex marriage,” The New York Times’ Adam Liptak adds.

For advocates of same-sex marriage, the prospect of a nationwide ruling that affirms the dignity and rights of LGTBQ couples has been many years in the making. Time and time again, they have watched as the Court has chosen to duck and dodge the issue.

The first case that had the country holding its breath was Hollingsworth v Perry, which contested California’s Proposition Eight ban on same-sex marriage and came before the court in 2012. After all the hype, the justices released an opinion a year later in which they ignored the constitutional questions of unfair discrimination and instead denied that they had jurisdiction over the matter at hand.

In October of last year, the line in the sand was drawn once again when four states appealed lower court rulings in favor of gay marriage. But rather than take the petitions and issue a definitive ruling, the Court simply declined to consider the appeals. That in itself proved a radical move – one that gave tacit approval to court decisions that found in favor of LGBTQ couples and that spurred the legalization of same-sex marriage in a further five states. As The New York Times’ Liptak notes:

The pace of change on same-sex marriage, in both popular opinion and in the courts, has no parallel in the nation’s history.

Now, with same-sex marriage legal in 36 states, more than 70 percent of Americans live in places where LGTBQ couples can get hitched. With the tide of public opinion shifting faster each day towards gay rights, it is past time for the Court to take seriously the question of whether the United States is a place that will continue to deny rights and legitimacy to couples simply based on their sexual orientation.

Not only is the time ripe for a ruling on normative grounds, but the chaotic mess of conflicting lower court opinions that has issued from the Supreme Court’s inaction needs some clarity and direction. At this point, arbitrary distinctions like where a couple lives or the day they went to the courthouse are determining whether or not they can enjoy both the legal rights and social status conferred by marriage equality.

But the Supreme Court is nothing if it is not cautious about advancing social change. They could still confound analysts’ predictions and dodge the question yet again by deciding on technical issues.

Or they could buy the legal arguments advanced by many proponents of so-called traditional marriage and decide that these issues should be decided not by judges and their constitutional standards, but by voters and legislators and their personal preferences. In his brief, Michigan’s Gov. Rick Snyder (R) defended his state’s position by alluding to a similar argument that Justice Anthony Kennedy made in his 2014 opinion against the state’s affirmative action program in higher education:

It is demeaning to the democratic process to presume that the voters are not capable of deciding an issue of this sensitivity on decent and rational grounds.

More like this
Gen Z Are Twice As Likely To Identify As Queer, According To New Data
By Sam Ramsden
Adam Lambert Called Out The George Michael Biopic Over Potential Casting
By Sam Ramsden
"Lavender Haze" Star Laith Ashley Breaks Down Filming With Taylor Swift
By Jake Viswanath
Ozzie’s Coming Out Scene With Kitty On 'That ’90s Show' Has Twitter Sobbing
By Brad Witter
Get Even More From Bustle — Sign Up For The Newsletter
From hair trends to relationship advice, our daily newsletter has everything you need to sound like a person who’s on TikTok, even if you aren’t.