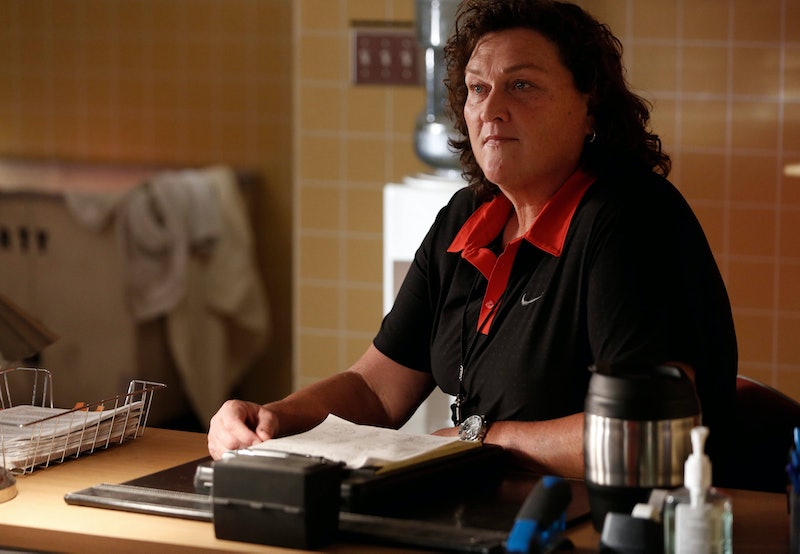 In a powerful story line that truly pushes the envelope in the way only this series can, Glee's Coach Beiste revealed to Sue and Sam that he is transgender and will be transitioning from presenting as a woman to presenting as a man. The moment came after a few plot twists regarding Beiste's recent strange disappearances during football practice. During a moment alone in the locker room after practice, Sam confronted Beiste and asked if Beiste was alright, but Beiste insisted a knee flare-up was responsible. After pissing off a rather obnoxious football player who then later went to Sue's office with the intention of getting Beiste fired and promoting Sam instead, Beiste was forced to explain the absences to Sue. Sue assumed it was cancer and Beiste did not dispute the fact, but finally came clean in a powerfully moving scene that revealed Beiste's true identity.

To be honest, the story line was a little bit of a surprise as I don't remember there being very many moments indicating that Beiste had an identity struggle. (I do remember another controversial story line involving Beiste being physically abused by Cooter in Season 3, and of course Beiste has always been an advocate for Mr. Schue and the glee club, even chaperoning them for their Nationals competition.) Beiste does talk to Sam about being a tomboy as a child.

Dot Marie Jones revealed in an interview that she would be out for the next few episodes but would return soon with some more great moments expanding Beiste's transgender storyline. As we saw in the episode, both Sam and Sue seemed to be supportive of Beiste, but will the show have other any other major characters be less accepting? Jones did not reveal anything about this aspect of the story line.

I'm intrigued to find out how far the show will push this story line, especially in light of transgender teen Leelah Alcorn's tragic suicide. People always say that Glee is about the underdog, and they're not wrong. But I think there's a deeper message than that. It's about acceptance. It's about being able to accept yourself and love your real, authentic self. And what better way to cement that idea than giving Beiste the happiness of self-acceptance?