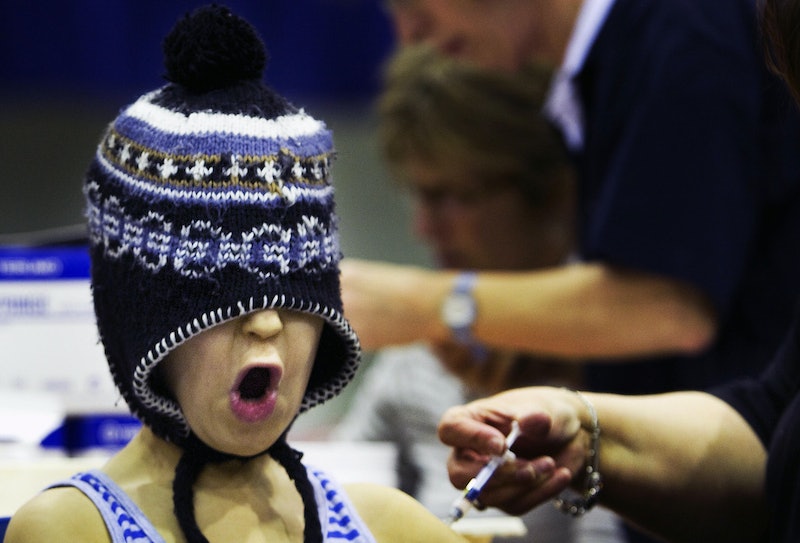 The happiest place on Earth has resulted in some rather unhappy news for 51 individuals, who comprise the confirmed cases of measles that originated from Disneyland between December 17 and 20. Following an outbreak during the holiday season, the virus, which had previously been effectively eradicated in the United States, began to spread beyond those who had visited the theme park, and now, health officials are concerned that the disease will continue to propagate, as several children have not been vaccinated. More than four dozen cases have now been reported across California, Utah, Colorado and Washington. And interestingly enough, trends suggest that the individuals most at risk for becoming ill are those at the top of the socioeconomic ladder.

In a strange twist of fate, those most susceptible to the disease are the children of wealthy, well-educated parents, who represent a large proportion in the growing trend of avoiding childhood vaccinations. Indeed, the trend began in the wealthiest areas of California, and has been spearheaded by a number of celebrity advocates, including Jenny McCarthy, who has long blamed vaccines for her son's 2005 autism diagnosis. Though there has been some pseudo-science surrounding such claims, including a 1989 article by Dr. Andrew Wakefield that suggested a direct link between the measles vaccine and autism, further research has debunked these myths many times over. In fact, Dr. Wakefield's article was found to be fraudulent by the British Medical Journal, and he lost his medical license soon thereafter. Still, the supposed health risks of vaccines have been raised time and time again by a number of famous individuals, including Bill Maher, Rob Schneider, and everyone's favorite The Hills star, Kristen Cavallari.

But now, thanks to the apparent virility of the anti-vaccination campaign, a number of young children have been endangered by the growing number of measles cases making their way around California. And in Orange County, where six new cases have been reported amongst people who did not visit Disneyland at the time of the initial outbreak, the vaccination rates amongst kindergarteners are particularly low. In fact, according to an analysis published by the Los Angeles Times in September, children in wealthy school districts, particularly those who attend private school, are increasingly un-vaccinated as a population. From 2008 to 2013, the number of parents who decided against giving their children their shots more than doubled, presenting a very serious public health risk in terms of the spread of infectious diseases, like measles, whooping cough and polio.

For illnesses like measles and whooping cough, at least 92 percent of a population must be immune (meaning vaccinated) in order to prevent an outbreak, and according to the September report, 5.7 percent of kindergarteners in California, most of whom lived in wealthy areas like Orange County, remained without their shots. And as this number grows, so too does the fear that conditions that were previously thought to be eliminated in the US will return in full force.

This certainly seems to be the case with measles, as the outbreak is now not only in California, but in three other states as well. According to the Centers for Disease Control and Prevention (CDC), measles is one of the "most deadly of all childhood rash/fever illnesses," as 90 percent of those who are not vaccinated and therefore not immune will catch the disease if they come into contact with an infected individual. Dr. James Cherry, a UCLA measles outbreak expert, told the Times,

There is a rather significant marked increase in unvaccinated people. The hope is that we can quickly get non-vaccinated people vaccinated ... But this could develop into the worst measles [outbreak] ever since 1989.

More than 150 schools in California have vaccine exemption rates of 8 percent or higher for at least one vaccine, which means that the proportion of vaccinated children in schools is no longer robust enough to prevent an outbreak. And every one of these 150 schools are located in areas where the average income is $94,500, which is 60 percent higher than the national median.

According to Matt Zahn, the medical director of Epidemiology and Assessment for the Orange County Health Care Agency, there is a direct correlation between wealth and failure to vaccinate. In fact, Zahn told The Guardian, "The rate of immunization falls as you go north to south. It tracks the socioeconomic statistics in the county." For example, in Capistrano Unified school district, where the average income is a whopping $127,621, 9.5 percent of children are not fully vaccinated. In comparison, nearby Santa Ana Unified school district has an average income of $84,775 and a median income of $68,812 — and only 0.2 percent of their kindergarteners have vaccine exemptions on file at their local schools.

So why the rise in unvaccinated children, especially when it comes to parents who should know better? Part of it may be attributed to the growing trendiness of natural, pure and organic lifestyles — as Americans have become more distrustful of GMO's and more attracted to buying local, it seems that they have taken the same mentality to health, opting for a more holistic, hands-off approach to their well-being. Nina Shapiro, a professor at UCLA, told Alex Seitz-Wald of Salon that the anti-vaccination movement is "a little bit of a trend," much like yoga and kombucha. Anti-vaccination parents seem to believe, "I’m going to be pure and I want to keep my child pure." Unfortunately, this has clearly resulted in rather dangerous consequences.

Amanda Marcotte of Slate suggests another reason, citing elitism and class privilege as a potential motivation for keeping children unvaccinated. Vaccines, which are intended to work on everyone, may be seen as too great of an equalizer for parents who want their children to "stand out," though in this case, standing out may be lethal. But for those who hope to distinguish their progeny from a young age, sending them to private school, buying brand name clothes, feeding them quinoa and kale instead of Gerber baby foods, perhaps there isn't enough of a cache in vaccines to make them attractive or necessary. As Marcotte writes,

The needles they want to stab into the fancy children of fancy Hollywood celebrities and dot-com billionaires are exactly the same brand and shape as the ones they put into kids who go to public school and whose parents buy their clothes at Target. Next thing you know, they'll be making everyone ride on public transportation.

In response to this bizarre and risky fad, there is now a growing movement suggesting that parents who choose not to vaccinate their children may be held legally responsible for the illness or death of other children — in a paper published in the Journal of Law, Medicine and Ethics, bioethicist Arthur L. Caplan writes, "One can make a legitimate, state-sanctioned choice not to vaccinate, but that does not protect the person making that choice against the consequences of that choice for others." As such, parents who opt out of vaccinating their kids could be charged with criminally negligent homicide or sued for damages should their decision impact the health of others.

Of course, suing parents with sick children is not an ideal solution by any means, but with the growing measles epidemic across the west coast, it seems that some measures will have to be taken sooner rather than later. Otherwise, we're just undoing decades of medical progress.