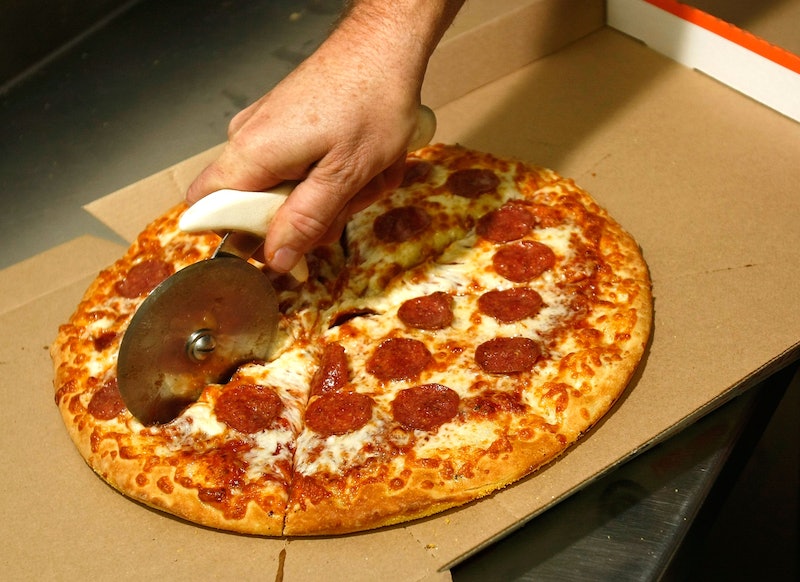 Here's a story to remind you that the world isn't always terrible. After a pizza deliveryman was stiffed out of his gratuity and verbally disparaged by one of his customers, the Internet decided to step in and provide him with the tip he should’ve gotten — and then some.

It all started when a video capturing an angry interaction between the driver, Jarrid Tansey, and a few employees at Westport, Massachusetts’ F&R Auto Sales went viral online. Apparently, the dealership placed an order that totaled a little over $42. They paid Tansey $50 and the driver then left, assuming that the remaining $7 and change were for him to keep. Unfortunately, the employees at the car dealership actually wanted the change back and called Palace Pizza to ask Tansey to come back and return the money.

Sounds like an awkward but relatively simple mishap, right? Wrong. The clip shows Tansey returning, as asked, to the dealership with the change. He and the group of employees discuss the miscommunication and the driver is just about to leave when he says, "I'm not mad, I just had to waste my resources coming back here.” For some reason, that (completely true) statement sends the employees over the edge and they start screaming at him, before eventually calling the pizza place to claim he "verbally berated" them. Needless to say, Tansey left, reprimanded and without a tip.

That’s when the rest of the world stepped in. After seeing the video online, a woman set up a GoFundMe page titled "Get Jarrid his tip money!," asking people to donate even just $1 to “make up (maybe a little) for him having to deal with idiots like this." In an epic show of karma, the site has raised more than $31,000 in only 3 days. Meanwhile, the dealership has had to close their social media accounts after a slew of backlash. Now, that’s what I call Internet justice at its finest.