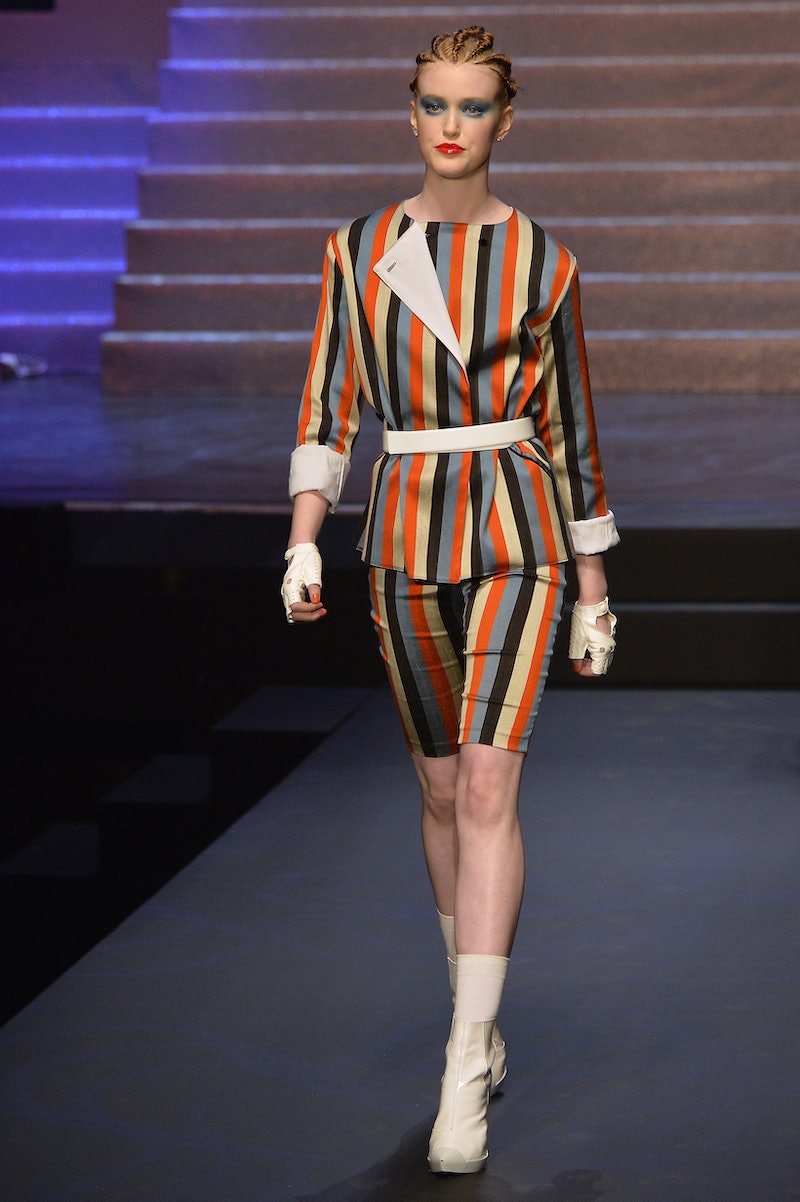 If 2015 wasn't off to a rocky enough start already, a lot of people are pretty annoyed about all the white models rocking cornrows in Valentino's Pre-Fall 2015 lookbook. I'm still trying to decide how I feel about it. The very first time I had my hair braided was at the hands of my Aunt Polly. She gave me stylish, long box braids, and for the first time I could flick my hair over my shoulders. I loved my new braids, mainly because they meant I could jump into the pool without thinking twice. Before those six hour plaiting sessions, I'd have to worry about the water ruining my afro, but now I could swim freely (OK, fine, I didn't know how to swim, but you get the point).

Sadly, once I left my summer vacation with my extended family in Virginia and came back to New England, I instantly regretted the braids I loved so much down south. In the predominantly black town I left in VA, my braids were the envy of all my cousins and their friends. On Northern soil, they were greeted with judgmental jokes and genuine fear of something different. As an adult, I wish I could go back in time and wear my braids with pride, but as a tween, I begged my parents to take me to the Dominican salon to remove my braids and the cruel Medusa nickname the kids at my tennis camp had given me.

Interestingly enough, the natural hair movement is slowly starting to afford children of color the ability to wear braids free of ridicule. Thank goodness, because braids are literally the best protective style. Still, it seems that natural hair comes with a stigma that people of color are constantly fighting, and those of us that grew up in predominantly white environments often carry those stigmas with us well into adulthood. What will it take to make cornrows, braids, and other black hair styles acceptable?

Well, the answer may be white people. The pre-fall fashion weeks have kicked off, and it appears cornrows are no longer a hair style to make fun of, but rather a hair style to be mastered and worn with thick bomber jackets and combat boots. You know, those same styles that people of color have been targeted for as being "ghetto" or "hood." The masses on Twitter are justifiably confused and baffled by this dramatic shift in the popular opinion of cornrows. I wouldn't be surprised to see a "Who Wore it Best" image of cornrows with a picture of a white model and black model in the next coming years.

I've been black for a long time now — my whole life in fact. It's unsurprising to me that cornrows have made an appearance in fashion week and I can't help, but wonder "What took you so long?". Sure, the models featured in the age-old protective style are all white, but I'm STILL not surprised. Sometimes, it takes an army of the majority to make a long-standing trend in a minority community popular, for it to become acceptable across the board. Call me jaded, but I've learned to live with it with little resentment. People of color have inspired numerous fashion trends throughout American history and most often than not, the credit is never given to us. Credit doesn't have to be an article introducing a trend titled "Thanks, black people, for telling us {blank} is cool," but to have Valentino feature at least one WOC in their lookbook would have been nice.

But, WAIT! That would make it a black thing, and black things are kinda inherently ghetto, right? Forgive me for getting ultra political while discussing hairstyles, but isn't that exactly what's happening with the increased police brutality that people of color, particularly black men, have faced for the last 50 years? Suddenly, there are protests in every city and our media, who previously shied away from covering crimes against black people in inner cities, have amped up their coverage on the violence and alarming arrests against black men. At the risk of sounding like Kanye after Hurricane Katrina, I have to say: We may have white people to thank for that... and I'm not sure that's a bad thing.

I'm not exactly saying "Thank you" either, it's more like a "Thank you?" with a slight tilt of my head and confusion in my eyes.

Of course, cornrows and police brutality are clearly two very different matters. Like many folks, I'm on the fence about cornrows being "colorless." Part of me thinks that I really could care less who wears cornrows and who doesn't. Another part of me has written a nine page letter demanding an apology from the class of 1997 that told me I looked like a hood-rat in braids. However, there is no part of me that thinks cornrows are only for black people. If white people want to spend hours putting their hair in braids for no practical reason, by all means, be my guest. Let's make them for everyone — but, designers? That means you have to include some WOC in your lookbooks, too.