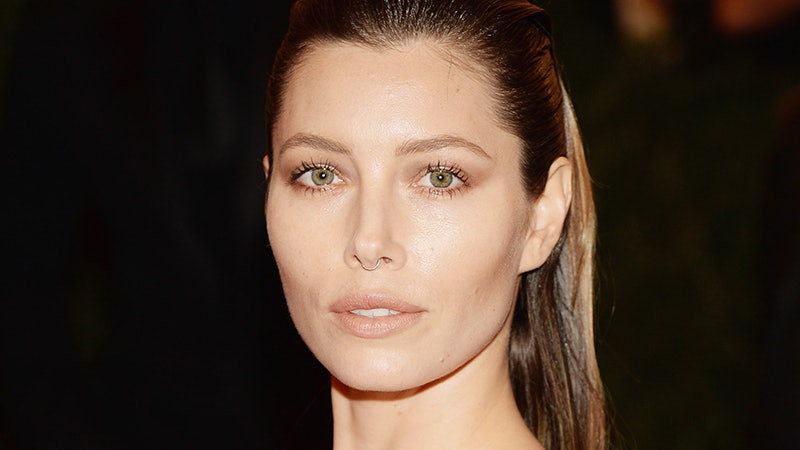 If you haven't heard, septum piercings have become incredibly hip in the past six months or so. They look cool, they can be easily concealed when flipped up, and celebs like Rihanna and Jessica Biel have faked the piercing both on and off the red carpet. While the septum piercing has infiltrated the mainstream and the celeb world, one can't help but wonder what kind of jobs for real people with septum piercings are out there. After a bit of research, I've come up with some good news: Despite what your parents may say, having a septum piercing does not make you completely unemployable. In fact, lots of big money, modern, and professional corporations have relaxed dress codes and flexible non-ear piercing policies, as well as being quite tolerant of tattoos.

The fact that you may be able to sport your septum piercing while making a difference and doing important stuff for a solid company says a lot about our society, since these looser policies mean employers favor self-expression. The focus goes entirely on someone's skill and talent, as opposed to what they look like.

One major employer that appears to be forward-thinking and less staid when it comes to employee appearance? Oh, just this little company you may have heard of called Google. The company is said to allow its employees to sport tattoos and piercings of all types.

There are no standard dress codes for employees at Google, so this is one case where you may or may not want to fold your septum jewelry up. It's a personal decision you have to make on your own.

Maybe you want to remove your piercing for a first interview, but honestly? I say eff it, and just be yourself. After all, some sources tell tales of prospective Google employees have showed up in board shorts and wowing the person interviewing them with their intellect and wit. If you're talented and confident, they probably won't care what's in your nose.

So that's great for the tech world, but not all corporate environments are welcoming to septum piercings. When I reach out to Goldman Sachs, they declined to comment on their piercing policy for this story, which would suggest that septums and other piercings may not something they approve of. The banking and financial sectors are incredibly professional and conventional, so you may have to settle for a putting a plastic retainer in your piercing for the 9-to-5 work day.

Additionally, Starbucks has relaxed its policy regarding body art. Its employees and customer base are comprised of a healthy percentage of millennials who like to modify their appearance with ink and jewelry. Until recently, baristas were unhappy that all tattoos were required to be covered by clothes, makeup, or bandages. Even though it's generally seen as a chill company, it made sense for Starbucks to have reservations about self expression, since their employees are dealing directly with the general public in all sorts of markets. As of last fall, however, that rule has changed. "We want to build a company where self-expression, empowerment and inclusion are nurtured," said COO Troy Alstead in an employee letter.

Now at Starbucks, employee tattoos can be visible, save for the face or throat. Small nose studs are allowed. Whether or not the policy pertains to the septum is unclear, so proceed with caution if you're heading into an interview. After you settle in, you'll get a better idea of whether or not the company is down with the septum — and that rule pretty much applies to anywhere you might want to work.

The general consensus seems to be that septum piercings are no longer solely the domain of rockers, tattoo shop employees, and people with no aspirations to work in the corporate world, as they once may have been.

However, depending on your professional ambitions, there are plenty of big name corporations that aren't worried about such trivialities. Just do your research before you head into an interview for your dream job.

More like this
10 Plus-Size Vintage Clothing Brands To Shop Online & In Store
By Dominique Norman
TikTok Says "Mewing" Will Sculpt Your Jawline — But Does It Work?
By Rachel Lapidos
The "Cloud Skin" Trend Is An Updated Way To Wear Matte Makeup
By Jordan Murray
BeautyBio’s GLOfacial Pore Cleansing Tool Is So Grossly Satisfying
By Erin Stovall
Get Even More From Bustle — Sign Up For The Newsletter