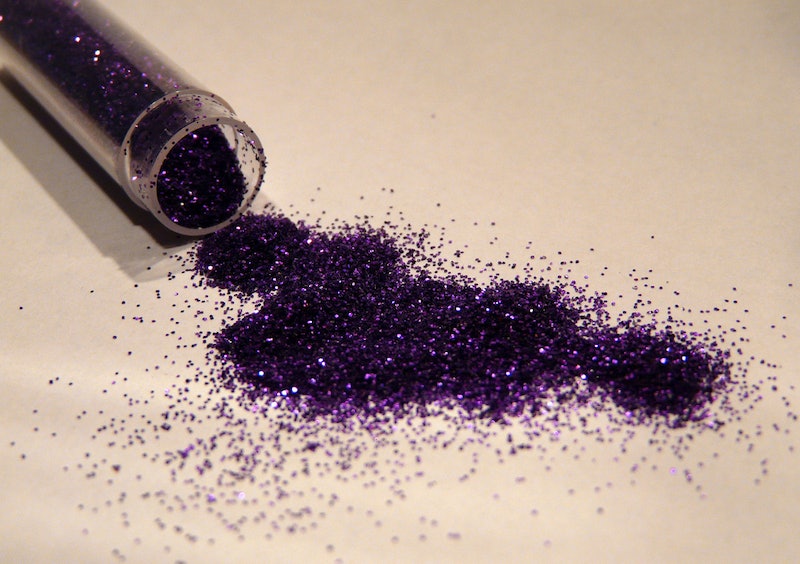 In case anyone managed to make it through last week's Ship Your Enemies Glitter saga thinking, "But what's so bad about glitter, really?"... here's your answer: This video shows exactly what happens when you glitter bomb your enemies — and it's full of expletives. If strong languages makes you faint, you might want to turn back now; it's not particularly creative strong language, but it involves a certain four-letter word being uttered repeatedly as an older gentleman attempts to deal with the glittery aftermath of the most annoying piece of mail ever. Consider yourselves warned.

As the Daily Dot noted, this glitter bomb came not from Ship Your Enemies Glitter — which, you'll remember, had ceased operations by the end of its first week and is currently up for sale — but from another service called Ruin Days. Ruin Days offers a fairly wide variety of ways to (you guessed it) ruin people's days via unfortunate items shipped through the postal service; there's an envelope-based glitter option (for the low, low price of $4.99), as there was with Ship Your Enemies Glitter, but there's also a spring-loaded tube option that launches glitter like a cannon from its innards when opened. That one will set you back $22.99 — but if this video is to be believed, it might very well be worth it.

Scroll down to watch the whole thing; in the event that you're somewhere you can't watch videos at the moment, though, here's the general gist of it in four pictures:

It would be pretty, if it wasn't so annoying.

He's in the middle of slamming the desk with his hands here. And no, he is not doing it out of the sheer joy of being alive. He's cursing the proverbial blue streak while he's at it, too.

Of course, as is the case with pretty much everything else on the Internet these days, it's highly likely the video is... well, maybe not a hoax, but at least staged. It's worth noting, for example, that the account that uploaded it is brand new; given both the timing of its appearance and the fact that the glitter bomb video is the only activity on the account, it's possible — likely, even — that the situation was staged and filmed purely to ride on the coattails of the whole thing. It could even be an attempt at a homegrown viral ad for the service in question, because let's face it: It's suspiciously well-framed, is it not?

But even if the video itself isn't actually showing anyone's real ruined day, it does appear to show the exploding glitter tube in action — and I do have to say, it's pretty impressive. Allegedly Ruin Days will also send spring-loaded tubes of poop for $40.99, but I'll only believe that one when I see it. As they say, pics or it didn't happen.