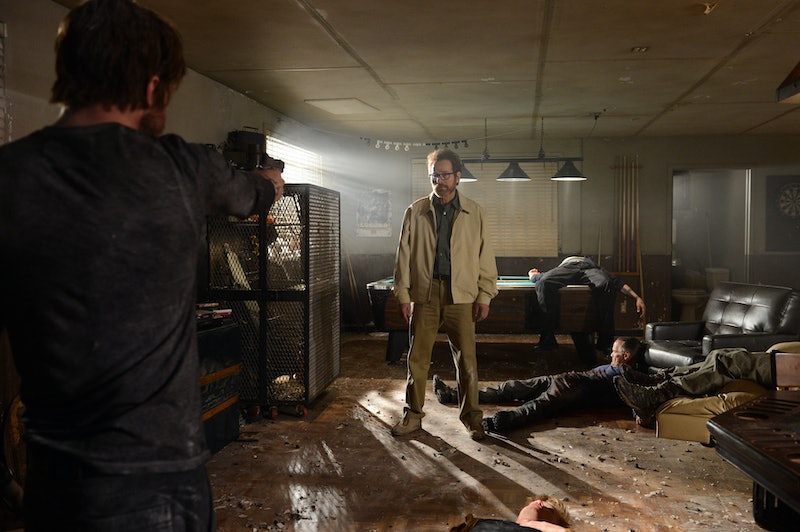 Throughout Breaking Bad, the show has asked us to reconsider our cultural archetypes — cops, drug dealers, mothers, neo Nazis. Okay, maybe the neo Nazis weren't outside the cultural norms, but everyone else was less good or less bad than we assumed they were.

And the series finale was no different. (Huge spoilers ahead!) Of those still alive going into the series finale, all the baddies are dead: Jack, Lydia, Todd, and yes, even Walt. And all the goods, or at least the blameless, are alive: Jesse, Skyler, and Walt Jr.

While the ending certainly works on a "Fuck yeah!" level, it also leaves a twinge of moral conflict to the traditional Hollywood ending. You wonder, with all those living, what will come of their lives? While Skyler's version of the poor house is a duplex that would cost in the millions if it were in the East Village, we wonder where her life will go from here. She has gotten paler, thinner, and is chain smoking. And while Walt is dead, her case with the state certainly isn't.

And as Jesse roars through the chain link fence, we wonder where he's going to go next. Will he be big papa to Brock? Will he continue to be killed by guilt? The moments after freedom, are unfortunately, less free.

But let's not get ahead of ourselves. The episode opens with Walt lurking in the background of Elliot and Gretchen's house (let's play Where's Walt? The Where's Waldo for 2013) and convincing the couple to create a fund of $9 million and change to give to Walt Jr. upon his 18th birthday.

Next in the things to line up is Todd and Lydia. Once again, it's Where's Walt? While he sits at a back counter of the cafe Todd and Lydia have regular meetings at. Not so long ago, Walt was the man having meetings with her there at 10 a.m. on Tuesday mornings.

Walt makes them an offer to teach them a how to make meth without the hard to come by Methylamine. The pair aren't interested, but are clearly unsettled by Heisenberg's sudden reappearance.

And finally, it's Skyler's turn to play Where's Walt? He appears in her not so poor, poor house. He hands her a lottery ticket with the coordinates of where Hank and Steve Gomez's bodies are and says she can use that to get a better deal with the Feds. But more importantly, Walt finally apologizes, not for the things that happened being of the meth cooking, but for being involved in it because he liked it. "I did it for me. I liked it," Walt said. "I was good at it. I was really… I was alive."

And that's more or less all that happened about an hour into the premiere (including the commercials). One viewing buddy said, "Why isn't there more stuff happening?" But it ramps up soon.

Walt's final stop is Jack's. After a frisk by the neo-Nazis, "You really shouldn't have come back Mr. White. I'm sorry," Todd says ominously. And when Walt accuses Jack of partnering with Jesse, Jack has Jesse dragged out of his pen. Walt lunges after Jesse and just when you think there's going to be a brawl, a machine gun goes off and takes down the Nazis. Hurrah! It was mounted in Walt's car and Walt actually lunged at Jesse to protect him. After the blast stop and the blood stops gurgling, Jesse sees Todd alive and strangles him with his handcuffs.

Jack is also still breathing and grabs a cigarettes and sucks on it hard. He offers to tell Walt where the money is although he's bleeding profusely. Walt doesn't buy it though, and bam, there are bubbles of blood on the camera lens.

Walt then turns to Jesse and passes him the gun. "Go on and do this," Walt says.

"Say you want this. Nothing happens until you say it," Jesse says. "Then do it yourself." He notices Walt bleeding (from protecting him) and walks out to freedom.

And in case your T's weren't crossed tightly enough, Lydia calls Todd and Walt picks up to inform her that she's dying from Ricin poisoning.

The show ends with Walt caressing a steel cylinder. Creator Vince Gilligan calls it "His precious" and just like the Ring, the meth cooking materials have a supernatural draw for Walt. As he gazes longing into its reflective finish, he dies while to music starts playing, "I guess I got what I deserve... The special love I had for you, baby blue." Yes, Breaking Bad is a love story too.