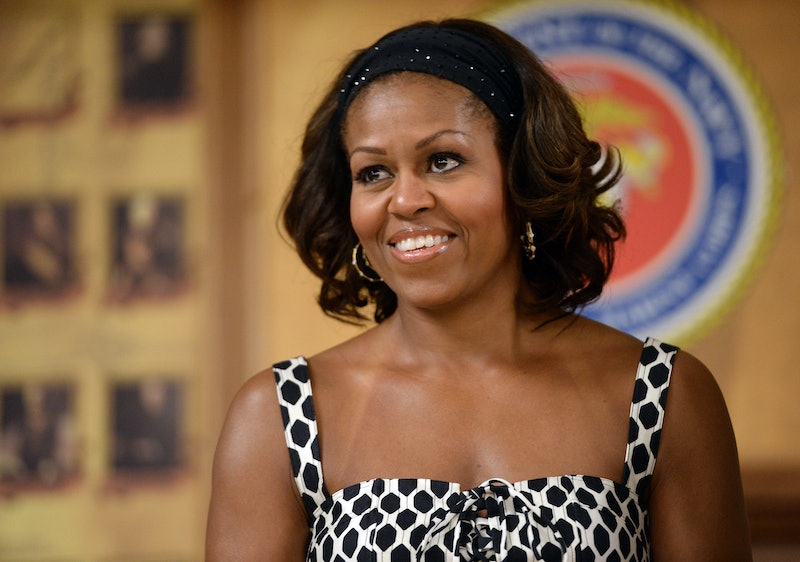 The White House has released Michelle Obama's State of the Union guest list, and it has some pretty unusual invitees: an astronaut, an undocumented college student, and a LAPD captain, to name a few. In all, 22 Americans were invited to sit with the first lady during President Obama's speech on Jan. 20. According to a news release from the White House, the guests were chosen because they "exemplify the themes and ideals" that the president plans to discuss in his yearly address.

Among Michelle Obama's 22 guests for the State of the Union are: Astronaut Scott Kelly, who's about to embark on a yearlong mission at the International Space Station; LAPD Captain Phillip C. Tingirides, who works in the Los Angeles neighborhood of Watts and has reduced the crime rate there by 50 percent; Maryland Senate Majority Leader Catherine Pugh; and Ana Zamora, an undocumented college student who advocates for rights for other "dreamers" like her.

Also on the first lady's guest list are Malik Bryant, a 13-year-old from the Chicago South Side who wrote a letter to Santa Claus last year asking for safety from gun and gang violence in his neighborhood; LeDaya Epps, a construction worker from Compton, California; climate change researcher and Latina activist Nicole Hernandez Hammer; and U.S. contractor Alan Gross, who was wrongfully imprisoned by the Cuban government for five years and just released in December.

More like this
What The UK Blocking Scotland’s Gender Recognition Bill Means
By Sam Ramsden
Watch Jacinda Arden’s Devastatingly Honest Resignation Speech
By Sam Ramsden
8 Charities To Donate To During Black History Month
By Alexis Morillo
Man Meets Politics: ‘Boy Meets World’ Star Ben Savage Is Running For Congress
By Jake Viswanath
Get Even More From Bustle — Sign Up For The Newsletter
From hair trends to relationship advice, our daily newsletter has everything you need to sound like a person who’s on TikTok, even if you aren’t.