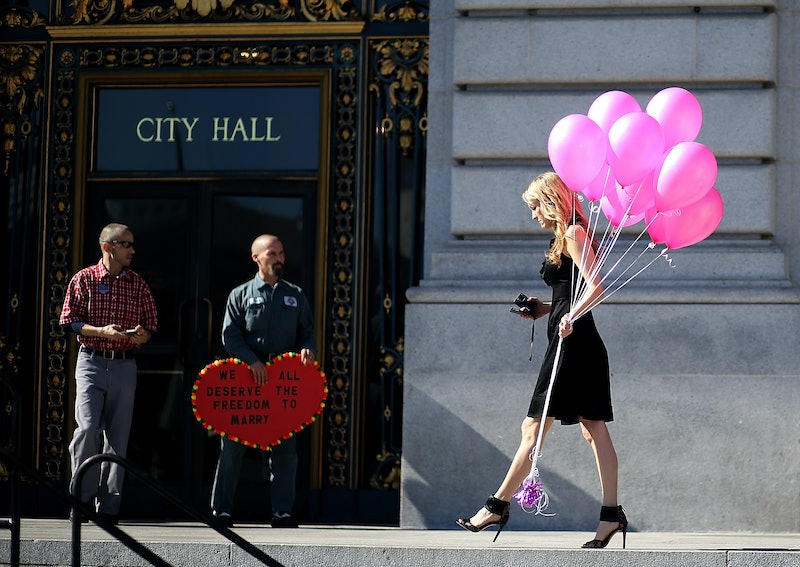 "Let's not kid each other; Valentine's Day isn't for dudes." That's what writer Naomi Piercey said when explaining to the male readership of Men's Health why exactly women love Valentine's Day. Since, you know, for some strange reason men can't enjoy a holiday meant to celebrate love in general or honor their relationship in particular, so they need some serious insight as to what the big commotion is all about.

For some, it may appear a difficult argument that the day is for dudes. The color pink; the traditional gifts of roses and bonbons; the general theme of love and romance — these are all things that society largely views (and media largely depicts) as female desires and pursuits. It is seen as a holiday when boyfriends should spoil their girlfriends, when in reality it should be seen as a celebration of all kinds of love — gay and straight, platonic and romantic, love of oneself.

St. Valentine married all those who came to him; military members and some Christians who no one else would give the time of day. He alone gave them the same rights their neighbors had, despite the decree of a cruel leader who had made marriage illegal in a harebrained scheme to strengthen his military. He gave them the rights they should have been born with. In celebrating, we're observing that blindness to oppressive societal standards, and that humane acceptance that should be commonplace in our world.

Anyone can appreciate that; single or attached, male or female, or somewhere in between. I have several problems with the idea that the holiday isn't meant for both men and women. It says something troubling about our society when we see anything celebrating love and affection as gendered in any way.

Piercey goes on to claim that the female-oriented holiday is the one elusive day women get the attention we crave. She writes:

It’s not even for couples. It’s a holiday that celebrates how much you care about your lady. That’s right, this is our day. And unlike other opportunities for men to shower their women with affection, it’s actually a day marked on our calendar. Which means we have time to get excited about it. All we really want is for your world to revolve around us. On Valentine’s Day we can pretend it actually does.

At present the Internet is simply buzzing with "where to take her" for V-Day and the ever ubiquitous "Gift Guide For Her." It's unavoidable that the day has grown to be associated with women because in many couples, women serve as one half of the puzzle, and as far as products go, marketers gonna market. But something alarming lies in the idea that the holiday belongs to ladies alone — or that it's about a woman's narcissistic desire to have our partner's "world revolve around us" for 24 hours.

The way I see it, claiming that Valentine's Day is a "woman's holiday" is not only just a bit insulting (it's a stereotype in and of itself that women need to be doted on and this ideology is lending to it immensely) but a full-on affront to the reason we celebrate in the first place. The day's namesake was a brave man who deserves for all parts of romantic (or platonic!) pairings — gay, straight, poly, etc —to benefit from his acts. why should anyone take away more than the other?

Speaking to this point, studies have shown that women celebrate the holiday more emphatically than men when it comes to the number of gifts purchased for friends and lovers, while men tend to purchase less heavily but spend more money on what they do buy. While our investment in chocolate bunnies and heart-shaped candy boxes is by no means a sign that we as women revere St. Valentine more strongly than men, it does indicate that we partake on a larger scale.

As it happens, this study might even suggest that Valentine's Day is a holiday meant for men: when we're out reveling in the festivities, buying heart-ified gifts galore with holiday-infused abandon, it seems fair to suggest that women are considering their (likely male) mates and what they might like as well. In short, indeed, women may participate more, but when it's for the benefit of others, what point are we really making here?

This day is in celebration of all the world's love and it should be for both halves of every couple, despite whatever gender we associate with cut-out hearts and the color pink.