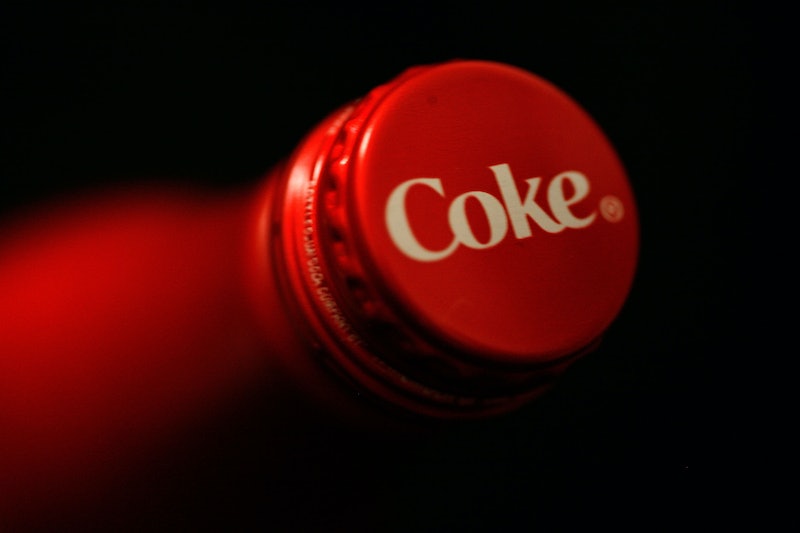 This weekend, Apple made some new enemies: Samsung posted an angry blog post pointing out that, by the way, guys, they made gold smartphones first, as a ton of iOS 7 users complained that the new interface makes them dizzy and nauseous. Maybe they'd like some soda for their stomach, because as if all that weren't enough, Apple has officially bumped Coca-Cola off the Most Valuable Brand throne.

For 13 years, the iconic company has topped Interbrand's "Best Global Brands" list. Slowly but surely, Apple has climbed upwards to steal its crown — it was number eight two years ago, and number two last year. Said Interbrand's chief exec of the shift in power: "What is they say — "Long live the king?" This year, the king is Apple," he said.

Meanwhile, Google has jumped two spots from last year to claim second place. Technology companies make up half of this year's top ten, including Samsung, IBM, and and Intel. "Brands like Apple and Google and Samsung are changing our behavior: how we buy, how we communicate with each other, even whether we speak with each other,” chief Jez Frampton told the New York Times. “They have literally changed the way we live our lives."

And for some Apple users who upgraded to iOS 7, that change is not working out so well. The new "zoom animations" of the operating system has prompted a slew of complaints on Apple forums from users who say that it makes them feel "seasick," and produces all the effects of motion sickness: nausea, dizziness, headaches, even vomiting. It looks like those who are susceptible to motion sickness anyway, like carsickness, tend to be the ones suffering. And unfortunately for them, it's near-impossible to revert back to iOS 6 — this year's version is the first that is impossible to reverse. We'd warned about the risks of downloading an essentially beta operating system, (namely that it hasn't been widely tested and that its first users would be guinea pigs) but failed to anticipate that vertigo could be an unintended side-effect. No word from Apple on the issue yet, though we imagine they're a little busy chanting "Long Live The King!" to shrines of Steve Jobs.

How do we know they're celebrating? Well, when you ask Siri today "What is today going to be like?" it responds with a Rick Astley song. Go on. Try it. "Never Gonna Give You Up," a hallmark of the 80s, is also Apple's official response to making Interbrand's top spot.

Meanwhile, Samsung (who climbed up one spot in Interbrand's list to rank as the world's eighth-most valued brand) didn't take especially well to all the jeers that they'd copied Apple's gold iPhone with their recently-released gold Galaxy S4. On their Samsung Tomorrow blog, a snappy post appeared entitled "'Golden' History Of Samsung Phones:"

By now you probably know that aliens work with Samsung, well so do some kings – Midas, to name one.

About a month ago on August 27th, Samsung launched the GALAXY S4 Gold edition in the United Arab Emirates. It’s since also been released in Kuwait and Qatar.

Everybody loves gold, which is why we sometimes make phones in that color. (Or sometimes even with actual gold for the body!) See below to check out some of the phones we’ve released in gold in the past (just off the top of my head).

The rest of the, cough, slightly bitter, cough, post rolls out an extended list of gold smartphones Samsung's produced since 2004. "This is definitely not a complete list of gold-colored products made by Samsung," it concludes. OK. Guys. We geddit. You were here first, and Apple totally stole your boyfriend.

The brand-new iPhone 5S wasn't expected to be available for store pickup until October, thanks to a combination of record sales and low stock, but as of today, there are phones available in stores. Availability is still pretty scarce, but you can find out online what few Apple Stores have the 5S in stock. (We know they have some, because Suri Cruise picked hers up from the Fifth Avenue store in New York City over the weekend.)

As if all that weren't enough, there are rumbles that there's more to come from Apple this fall: a new Mac operating system called "Mavericks," a brand-new Mac Pro model, and a re-built iPad 5 alongside a "Space Gray"—colored iPad Mini. (The new iPods also come in this new "Space Gray" color, which makes us wonder if the company took the success of 50 Shades Of Gray a bit too literally.)

For a quick trip down memory lane, here's Apple's historic "Think Different" ad, which billed the Macintosh as an offbeat, unique alternative to PCs:

And here's the classic white-background ad that's been running, in various forms, since the unveiling of the first iPhone, and has won them their crown. Take a bow, guys.

By comparison, here's the dethroned Coca-Cola circa 1953, which apparently was at the time made specifically to cool down women after a long, hard day of shopping. Keep an ear out for that Disney-esque theme tune, "There's Nothing Like A Coca-Cola:"

And Coca-Cola today, which is apparently aimed at polar bears after a long, hard day of sitting on the ice caps.