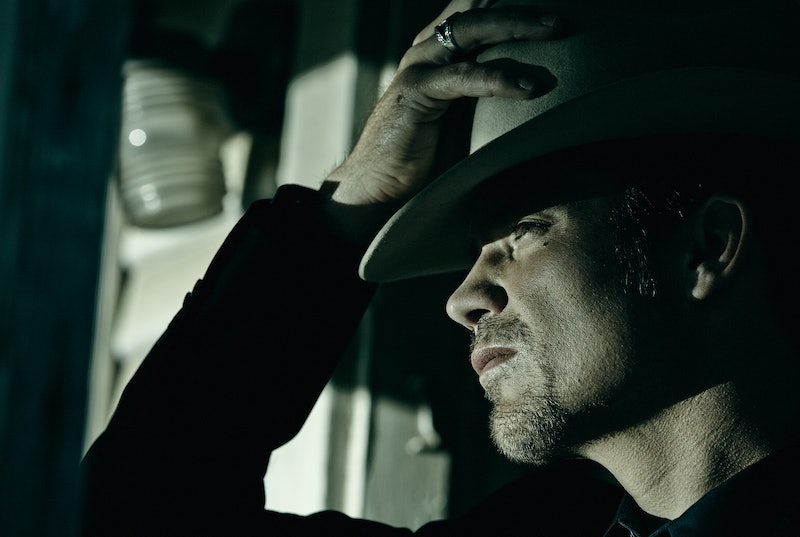 After five — soon to be six — seasons of Justified, I got used to having Timothy Olyphant around my TV. Maybe I took him for granted. Now that Justified is ending, I'm going to have to start getting used to the idea that he won't roll onto my television set with his gleaming white cowboy hat and sly grin. But do I really have to get used to not having him around? What's next for Timothy Olyphant after Justified ? After all, it seems, well, unjust to live in a world where Olyphant doesn't have a TV show, but his lesser look-alike, Josh Duhamel, gets to be on Battle Creek week-in, week-out.

Well, it turns out, the world really is as unfair and chaotic as the streets of Harlan County. If Olyphant does have a plans post-Justified, he hasn't shared them yet. Not even a peep of a cameo or a This Is Where I Leave You-sized film role.

Maybe because, as of right now — this very day, the day of the sixth-season premiere — Olyphant is still working on Justified. "We don't have the ending yet," executive producer Graham Yost admitted to The Hollywood Reporter and others at the Television Critics Association (TCA) winter press tour. What?!

"We're shooting episode 10, and we have a script for 11," Yost explained, "and we're also breaking and then outlining 12. And then we're getting to 13. That doesn't mean we haven't been thinking about the ending." Well, thinking is good, but ending the show that starts tonight is something they're going to have to figure out right quick.

Olyphant, at the same TCA event, admits that he's been thinking about his own ending. "I’m unemployed and I’m going to have to say ‘yes’ to some shitty-a** jobs,” he said. “All those jobs I’ve said, ‘no,’ to in the last five years, I’m going to say, ‘yes,’ to. F***!” Deadline, which reported the above quote, adds that executive producer Michael Dinner disagreed, saying, "I think Tim can do whatever he wants. He’s smart.”

If everyone is sad about the end of Justified and if Olyphant doesn't want to do something like another crummy Hitman movie (though, technically, that ship has sailed, since there's Agent 47, a kind of Hitman reboot with Rupert Friend playing Olyphant's part), there's obviously only one solution.

"Six seasons and a movie? Is that a thing?" Olyphant asked Rolling Stone. "Man, I wouldn't even know how that would work. But I do like the sound of it." I do, too.

More like this
Another Side Of Rupert Grint
By Maria Sherman
At 28, Rosie Perez Risked Her Career To Stop Playing Stereotypes
By Gabrielle Bondi
Here’s Everything Coming To & Leaving Netflix In February
By Jake Viswanath
Adam Ali Hopes 'Waterloo Road' Will “Subvert” Queer Misconceptions
By Sam Ramsden
Get Even More From Bustle — Sign Up For The Newsletter
From hair trends to relationship advice, our daily newsletter has everything you need to sound like a person who’s on TikTok, even if you aren’t.