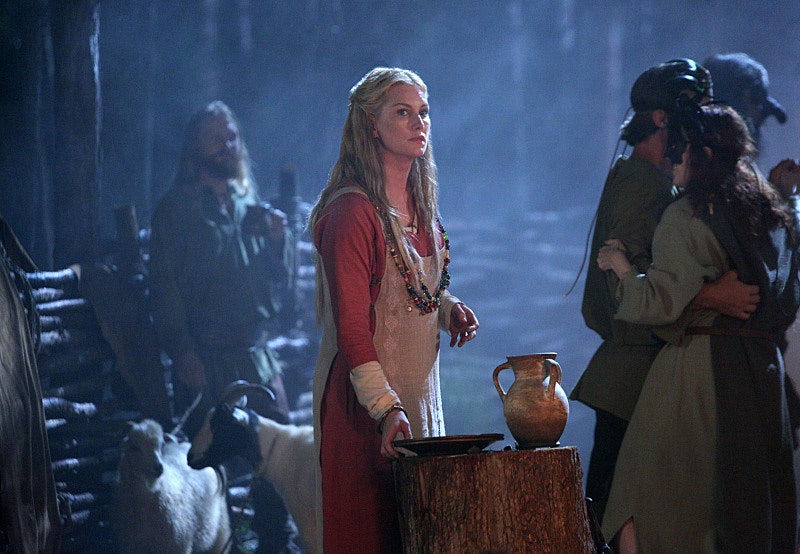 We all knew this was coming, right? Apparently there aren't nearly enough Mikaelsons in New Orleans because The Originals is adding another one and confirming a huge threat that's coming for Klaus. On Monday's midseason premiere, "Gonna Set Your Flag On Fire," The Originals reintroduced Freya Mikaelson because it's time for the eldest Original sibling to have some fun. And the series all but confirmed that the greatest evil Klaus will face in The Originals Season 2 is still yet to come.

Before the midseason break, The Originals introduced Freya Mikaelson, Esther's first daughter, in a flashback that explained why Esther wanted baby Hope dead. Esther was infertile way back in the Middle Ages and, because she refused to do magic herself, turned to her sister Dalia to get pregnant. And she did — but, like we've learned time and time again, magic comes with a price and Dalia took Esther's first daughter, Freya, as payment for the spell. Still not remembering why that affects baby Hope's survival? Well, Dalia didn't just claim Esther's first born, she also claimed the first born of the rest of her children. So, Freya's spirit's appearance in the Dowager Fauline Cottage in the final moments of the midseason premiere doesn't just mean that Esther's eldest child is joining her siblings in the Big Easy — it means that Dalia is on her way.

As far as why Freya is back, it 100 percent has to do with Klaus searching for a way to get Rebekah out of her new body and back into her old one. Is Freya also trapped within the walls of the witch asylum? It's possible, considering she's one of Esther's children. Is she a menacing presence or trying to help guide Rebekah back to her body? Either way, it's getting crowded in New Orleans — even if the Mikaelsons aren't all inhabiting their original bodies. And, apparently, if we thought Esther and Mikael were bad, the worst is still yet to come.