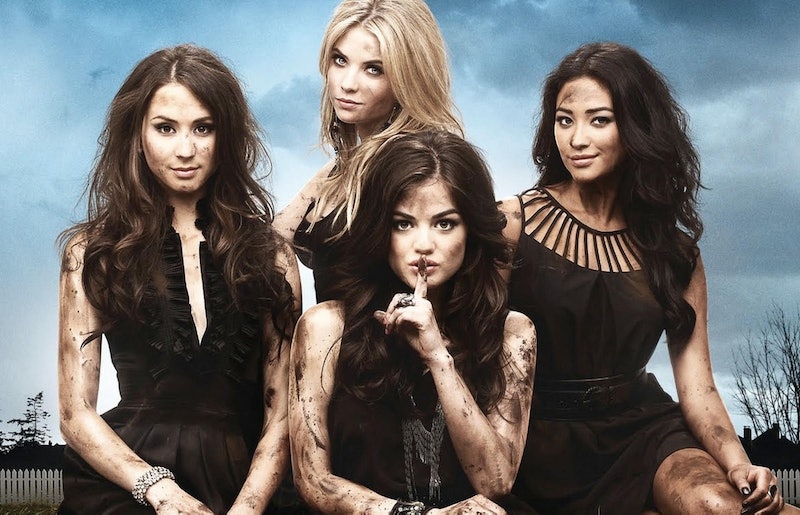 With a show as complex as Pretty Little Liars, you have to be on the lookout for clues everywhere. That's what I discovered when I re-watched the first episode and noticed a bunch of things you miss the first time you watch the Pretty Little Liars pilot. I'm talking big hints as to who "A" was and that something sinister was up with Ezra. But fans should have expected that seeing as show creator I. Marlene King has been plotting the big "A" reveal since the first episode.

In a 2012 interview with The Hollywood Reporter, King dished on just how far back clues to the identity of "A" can be spotted.

We’ve known who "A" was since the pilot was written, so knowing that, I don’t think there would ever be a way to do this show unless we were committed to this person being “A," because we wanted to make sure “A” always had a motivation, a reason for “A” to do what “A” does. When we reveal “A,” you’ll go back and say, “Oh my god, it all makes sense!”

And it does make sense. If you go back and re-watch the pilot episode you'll see all kinds of things you missed the first time around. But, hey, at least you'll always know more than these PLL virgins who tried to describe the show and got, well, very confused.

Mona Gets Mad When Hanna Waves at Aria

We learn later, of course, that Mona became "A" to keep Hanna hers and away from her old friends. (That plan didn't work, though. Poor Mona.) But if you notice in the pilot, when Hanna waves at Aria in Ezra's classroom, Mona is very mad. We should have suspected her from the start!

Mona Sent That Text to Aria

In the scene where Aria gets her first "A" text, you can see that Mona's hand is under her desk and she's most likely sending that "A" message. I don't think it's a coincidence that Aria gets the first one, either, considering Mona watched Hanna wave to her and got jealous.

That's the Mrs. D. we meet in the pilot. Later Anne Marie DeLuise was replaced by Andrea Parker.

All I have to say is thank goodness Keegan Allen replaced this dude. (No disrespect to James Neate, but Keegan Allen was meant for this role.)

They're Not Very Good at Making Hanna "Hefty"

In the flashback, Ashley Benson just looks like she's wearing baggy clothes, but she doesn't look overweight. I'm pretty bummed that this is how the show portrayed her being fat, when she actually looks pretty average. It could give a lot of girls watching the show a complex about their own bodies.

Spencer Looks Guilty As Hell & Not That Great at Acting

We know later that she was on a lot of pills that fateful night, but when she came into that barn and dramatically announced that Ali was gone, I could hardly take her seriously, but I also thought she was obviously the murderer. "I think I heard her scream," said Troian Bellisario who hadn't quite figured out believable dramatic acting at that point. Catch the line at 1:45.

Can We Talk About Ezra's Mop of Hair?

Curls for days. He's really cleaned up his act since the pilot.

When I first watched the pilot, I thought Ezra was adorable and I totally loved him with Aria, teacher or not. But now after learning that he knew who she was (and how old she was) prior to meeting her...it makes things a little creepy. I know Ezria worked things out, but still...yuck.

The Phones Are Super Old School

Flip phones! Remember those? It's hard to believe that just five years ago that's what cellphones looked like for the vast majority of people.

Mike Montgomery Was Once a Baby

Cody Christian used to be so young, but just look at him now. He's a total hottie.

Ezra Only Apologizes After Ali's Body is Found

After Alison is found dead, Ezra's book project probably got a lot more interesting to him. It's no surprise he then sought out Aria to try to make things work. But he only cared about getting to know her more when her friend turned up dead instead of just missing.

And Why is Ezra Even at Ali's Funeral at All?

How come nobody questioned why the new teacher went to the funeral of a student he never met? We learn later that he did know Ali, but how did that not raise any red flags at the time?

The Sleepover Song is Very Telling

The song the girls are listening to in the first scene is "Don't Trust Me" by 3OH!3. *Bang!* That's the sound of the symbolism hammer hitting you over the head.

If only I'd have picked up on all these items the first time I watched the pilot, I'd have figured out things so much sooner.

For more PLL, check out Bustle's Pretty Little Liars podcast, "Taking This One To The Grave:"