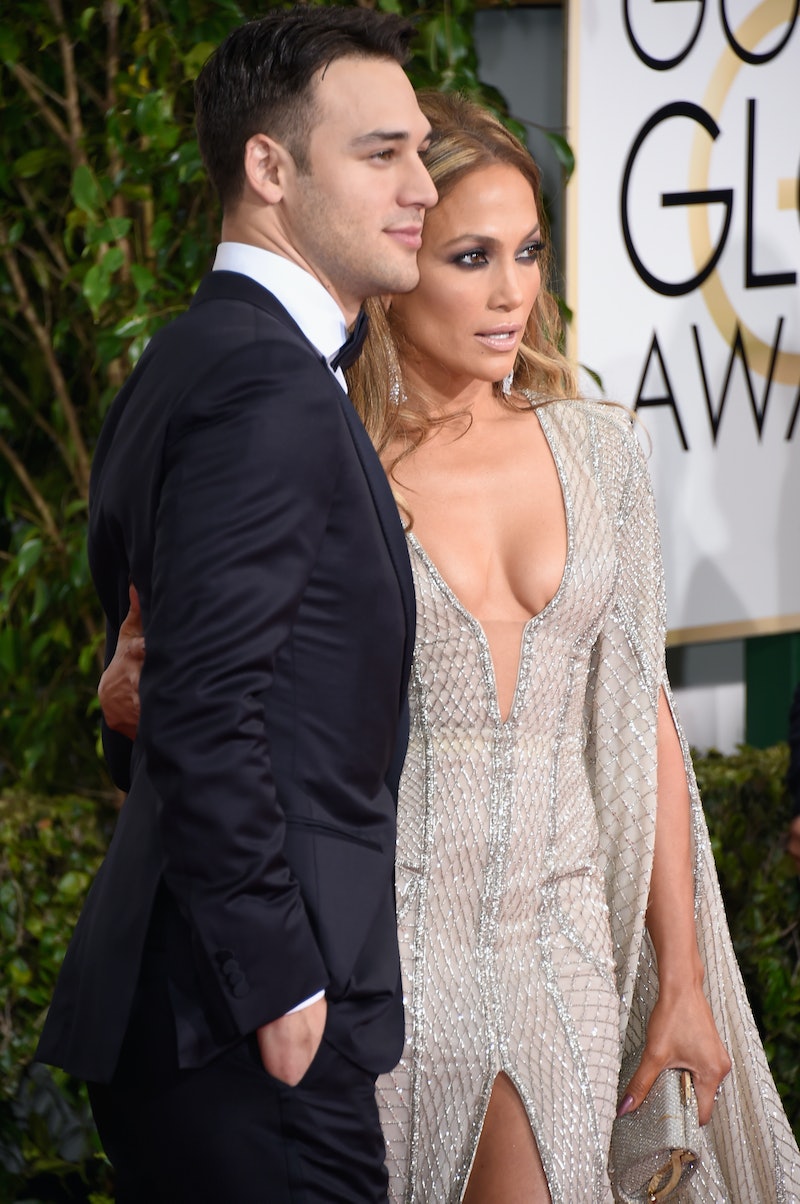 Jennifer Lopez is a lot of things. Like, one of the most beautiful, talented, famous, and all around perfect celebrities in existence. OK, I'm a big J. Lo fan and I essentially believe she is a flaw free Latina queen, but just like most celebs — female celebs in particular — she is plagued with some of the unsavory parts of celebrity, like unnecessary focus on her age when it comes to who she's dating. (For the record, she's 45.) Tired of all that, Jennifer Lopez shot down the cougar label when she appeared on The Ellen DeGeneres Show on Tuesday. "Cougar" is a word that has been most recently placed on her when it was rumored she might be dating her hunky The Boy Next Door co-star, Ryan Guzman.

While Lopez has indeed been attached to some younger men, like Casper Smart and Dancing With the Stars' Maksim Chmerkovskiy, she's had relationship with men her own age as well. She explained this and pointed out that she takes offense to the term telling DeGeneres,

And like usual, I completely and totally agree. Lopez concluded her statement with, "There's just a little bit of an imbalance there. Not fair."

As a matter of fact, this is not the first time she's been OVER IT when it comes to sexist double standards, so here are some of the other times that J. Lo refused to be put in a box because of her sex and age, and remained flawless while doing so.

In the intro for the video of "I Luv Yuh Papi," J. Lo and two of her girlfriends are discussing the video for the song, in which the director suggests "a waterpark" and the ladies laugh because in their words, "If she was a guy, we wouldn't be having this conversation at all." So, instead of Lopez and other women being objectified, they turned the tables and objectified men for four straight minutes to point out the double standard.

The singer said in an interview with Entertainment Tonight, "I thought to myself, 'This is a good message.' People try to put women to sleep at a certain age. It is NOT fair, and that is not how it should be because women at a certain age really start to blossom. I didn’t even know who I was in my twenties and early thirties… but I know who I am now."

When She Was Labeled As A Cougar Before

While dating dancer Casper Smart, J. Lo was repeatedly labeled a cougar and told Self Magazine that she was tired of it. She explained, "All the old clichés about women need to be undone. Enough already. We're in the other position now. We are desirable older, we can date younger guys and it's not this big taboo. Men have been doing this for years, and it's no big deal."

When She Defended Herself Against Critics... Again

In an interview with Yahoo Insider!, Lopez hit back at critics who said she was "too old" to be sexy in her videos by saying, "This is good for women. You have to know that you don't disappear after you're 28 years old. You can be here, you can be vital and young and sexy and feel good about yourself. You don't have to worry about competing with anybody. We weren't competing, me and Iggy, in the video. We were co-existing in a beautiful way."

More like this
J.Lo Uses They/Them Pronouns To Introduce Her Child Emme For A Special Duet
By Jake Viswanath
J.Lo Calls Ben Affleck “The Most Consistent & Selfless” Dad On Father's Day
By Jake Viswanath
Michael Owen Has Shared His Thoughts On Luca & Gemma
By Bustle UK
Bachelor Nation's Blake Horstmann Is Dating 'Love Is Blind' Star Giannina Gibelli
By Jake Viswanath and Radhika Menon
Get Even More From Bustle — Sign Up For The Newsletter