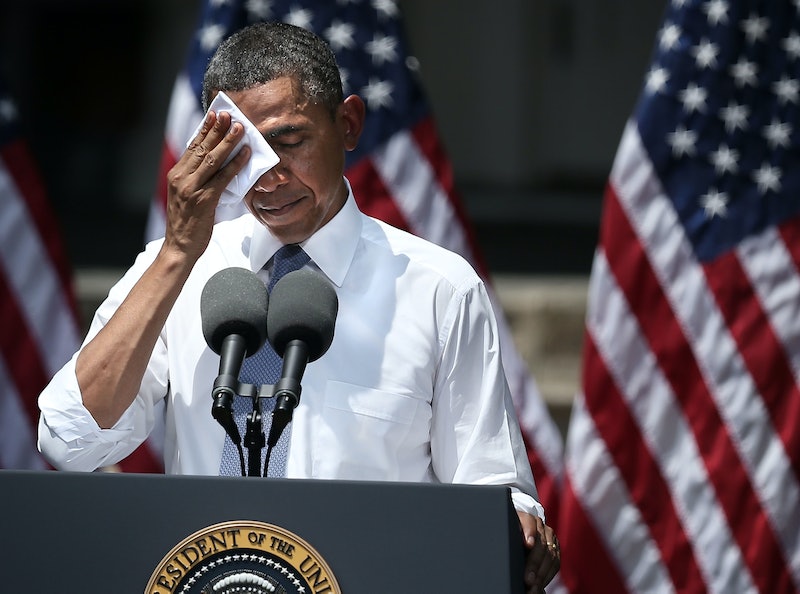 Well, here we go. On Monday afternoon, the Senate rejected a last-minute spending measure approved over the weekend by the House, meaning it's now back to House Speaker John Boehner and other House Republicans to decide whether they will pass a budget funding Obamacare in favor of avoiding a politically-unpopular government shutdown at midnight tonight.

So are Republicans going to budge? "We have tried robustly on the spending bill and it hasn't borne fruit," said Rep. Doug Lamborn (R., Colo.) "for this week we may have to give up." That, said, not every member of the House GOP is expressing those kids of doubts.

Analysts are expecting to see the government temporarily shut down. It's not as apocalyptic as it sounds: the U.S. Postal Service will continue to run, federal services deemed "necessary" (and that's most of them) will stay afloat, and Obamacare will even kick into effect on Tuesday, as planned. Most Americans probably won't notice a difference in their daily lives for at least three or four weeks.

Shutdowns are the first port of call when Congress reaches an impasse on funding measures: there have been 17 shutdowns since 1977, though the country hasn't seen one since 1996. Then-president Bill Clinton and House Speaker Newt Gingrich's standoff lasted over three weeks — the longest in history — and cost the government more than a billion dollars. Republicans are defending their dominant role in the shutdown with remarks implying that the 1995-6 shutdown was actually a good thing: they've claimed that it led more balanced budgets, had no discernible financial penalty to the country, and "reformed welfare," according to, um, Newt Gingrich. We'll take that one with a pinch of salt.

So this time around, is Obama sweating it?

The president initially tried to mock Republicans into bowing down from blackmail with pointed comments about how "ridiculous" their premise to oppose Obamacare was. After all, Obama can't afford to cave to GOP's hostage conditions: the Affordable Care Act has already taken a year and a half to pass, survived the Supreme Court, and made it through a presidential election. The president hopes that Obamacare will be his legacy, and he's only got a few years left to ensure it stays — and holds. Moreover, the Republican-led House is offering such a one-sided "negotiation" that to accept it would make the president look weak and ineffective. From MSNBC's "Maddow Blog," a visual explainer:

Did we mention that GOP leaders snuck in a provision to limit access to contraceptives over the weekend? Yup: politically, it's impossible for Obama to accept their conditions, particularly after all of his very public mockery of Republican opposition to his beloved healthcare reform.

But here's the problem: The president cannot afford the financial aftereffects of a) a government shutdown, or b) breaching the debt limit, which is to say not being permitted to increase the debt ceiling. Though Obama can't politically afford to accept the GOP's conditions, he literally cannot afford what will happen if he lets the GOP continue off the fiscal cliff they've chosen to dance upon. And therein lies the GOP's power: they know they're able to hold the president at ransom because it's his responsibility to prevent what will happen if he doesn't give up the healthcare reform.

So, if the House continues their refusal to compromise, what's next? First off, the economic reverberations of a government shutdown. Obama vowed to make the struggling economy his chief priority for his second term, and the financial landscape is only just showing signs of clawing back to life.

The blow of a shutdown to the local economy in Washington, out of which most federal agencies operate, is currently estimated at $200 million dollars a day, and three-quarters of a million jobs. Washington's economy is weak at present, having lost billions of dollars and more than 26,000 jobs in the last year alone, according to the Washington Post. Analysts are calling a shutdown a potential "tsunami" for the region, and a proposal is already in the works to exempt Washington from it. (Under federal law, however, it can be a felony for the government to spend taxpayer money during a shutdown.)

It's impossible to estimate the consequences of financial destitution to the nation's federal and political center, but rest assured: it ain't good. Stocks already fell by a sharp one percent Monday, and markets are only growing to grow more rattled as the situation continues. And then there's the debt ceiling, which needs to be raised by mid-October, or the government will run out of borrowing authority. The threat posed by breaching the debt limit is unknowable, basically unprecedented, and very scary. The first day that the government literally has no money left to spend is known by one agency as X Date, and it would look like this, according to the Atlantic:

On a typical day in late February 2013, the government can expect to take in about $9 billion and spend about $15 billion. In Default America, however, we wouldn't have the authority to spend that extra $6 billion. So those payments would simply go unpaid. Somebody in Washington would have to decide who gets the money they were promised and who doesn't. Every day. As long as the debt ceiling isn't raised. Basically, we'd default on 40 percent of our obligations, over and over again.

What would we pay and not pay? We'd have to make a list. (And that assumes the government's computers can even process this sort of prioritization, which is unprecedented.) At the very top might be interest on our debt to keep buyers trusting in the full faith and credit of the U.S. Then maybe Medicare, Medicaid, Social Security, and tax benefits. That means we wouldn't have enough money for ... basically anything else.

Risking these sorts of consequences is a breaking of basic Congressional norms, says New York Magazine, calling the current landscape "the fight of Obama's life."

A small group of Right-leaning leaders in the Republican Party (far from all of them, it's estimated that only a third are completely unwilling to accept Obamacare) are essentially holding the country hostage, and all for the sake of a single healthcare bill.