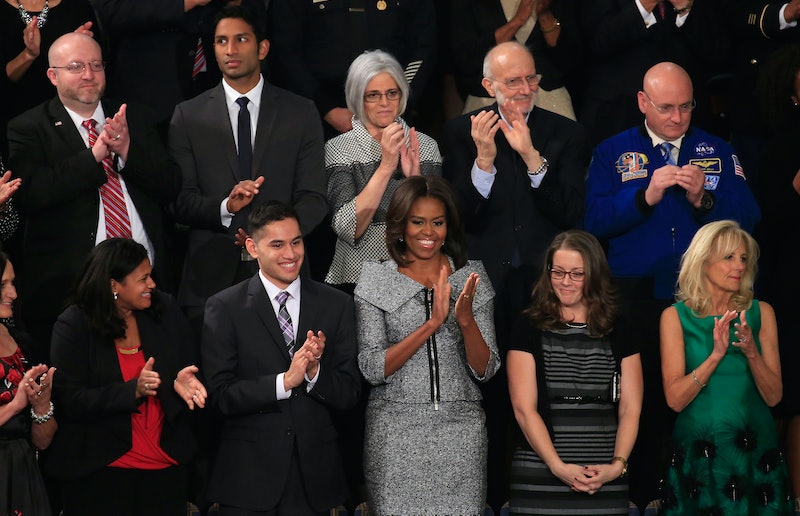 The Obama administration has been working tirelessly to counteract the so-called War on Women launched by the right over the last few years, and the pro-women agenda should continue well in 2015 despite facing a heavily Republican-controlled Congress. During Tuesday night's State of the Union address, President Obama discussed new pro-women initiatives that will be revolutionary for America—yes, really. Even the president acknowledged it.

Following up on his recent promise to push for mandated paid maternity for federal workers, Obama mentioned early in his address that paid maternity leave for all American women will be part of his platform for his last two years in office. Considering that the United States is the only industrialized nation in the world without any form of mandated maternity leave, the measure would be a huge advancement for American women, many of whom continue to face economic strife and loss of opportunities once they have a child.

"Today, we’re the only advanced country on Earth that doesn’t guarantee paid sick leave or paid maternity leave to our workers," Obama said.

However, that's the only mention the president made of paid maternity leave, instead choosing to focus on earned sick leave. An initiative that has been gaining ground across the country, earned sick leave continues to be a prominent issue among women, who historically make up the hourly wage and low-wage workforce, where lack of paid sick days is the norm, not the exception.

Just last week, the White House announced that Obama would be pushing for a nationwide earned sick leave law, which would guarantee working Americans with seven paid sick days each year. On Tuesday, Obama pressed the importance of earned sick leave and the impact it would have on nearly 50 million American workers:

Forty-three million workers have no paid sick leave. Forty-three million. Think about that. And that forces too many parents to make the gut-wrenching choice between a paycheck and a sick kid at home. So I’ll be taking new action to help states adopt paid leave laws of their own. And since paid sick leave won where it was on the ballot last November, let’s put it to a vote right here in Washington. Send me a bill that gives every worker in America the opportunity to earn seven days of paid sick leave. It’s the right thing to do.

Obama also talked at length about an issue that's financially draining on millions of working mothers and fathers out there, but has rarely been talked about at the federal level: universal childcare. [Childcare is] not a nice-to-have," the president said. " It’s a must-have."

Perhaps in a way to de-gender the issue and gain support from those who believe a woman's place is in the home — and not the House — Obama made sure to emphasize that universal childcare is not "a women’s issue." Rather, it's a "national economic priority."

"That’s why my plan will make quality childcare more available, and more affordable, for every middle-class and low-income family with young children in America," Obama said. To do that, he will provide a new tax cut — up to $3,000 per child per year — for families.

Equal pay also received its moment, as the president chastised Congress for stalling on the Paycheck Fairness Act. The bill, which has been stuck in Congress since 2009, would strengthen protections granted by the Equal Pay Act of 1963 and work to close the lingering gender pay gap; data from the Department of Labor shows that women make, on average, 78 cents for every dollar men make, while women of color make significantly less:

That’s why this Congress still needs to pass a law that makes sure a woman is paid the same as a man for doing the same work. Really. It’s 2015. It’s time.

However, many women's issues were missing from the president's address — or only briefly touched upon, with no further elaboration or definitive promises. Now that both the House of Representatives and the Senate are led by Republicans, you can bet that the Affordable Care Act will be on the chopping block — again. But the president — perhaps wisely — skirted around talk of the controversial healthcare law and its even more controversial birth-control mandate.

Obama also failed to mention sexual assault — despite having prominent sexual assault activist and Columbia University student Emma Sulkowicz in the audience — and made just a throw-away statement about equal pay for female workers.

It was not all for naught, though. Upholding his status as the "pro-choice president," Obama reaffirmed his support for abortion rights and affordable access to birth control, saying:

We still may not agree on a woman’s right to choose, but surely we can agree it’s a good thing that teen pregnancies and abortions are nearing all-time lows, and that every woman should have access to the health care she needs.

Given that the House introduced a 20-week abortion ban on its first day back, and access to abortion continues to crumble in states from Florida to Colorado, is his pithy declaration enough to convince anti-abortion Americans and their legislators? Probably not in this divisive climate. But at least we know the president has our backs......and supports the 7.8 million small businesses ran by women. It's time we use that "she" pronoun more often.

More like this
'The Capture' Is Finally Back – & S2 Looks Tense AF
By Sophie McEvoy and El Hunt
The Lionesses Are Calling For Equal Access To Football In Schools
By Sophie McEvoy
Gassed Up Promises All Things Action, Risk, & Redemption
By Frances Stewart
42 Black Owned Fashion & Beauty Brands To Support Today & Always
By Mekita Rivas, Shea Simmons, Kui Mwai and Dominique Norman
Get Even More From Bustle — Sign Up For The Newsletter