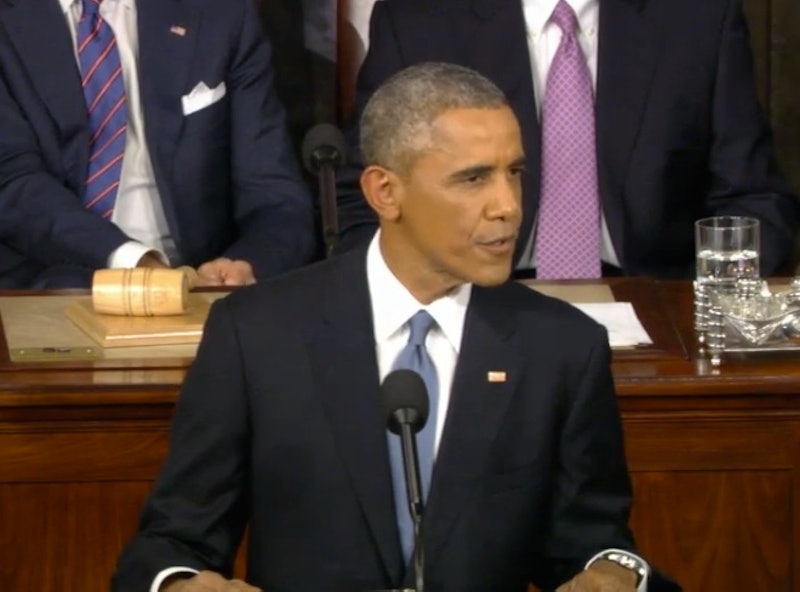 If there's one thing that matters when you're talking to the entire country, it's that it isn't enough just to sound good. You have to look good, too! Just ask Richard Nixon back in 1960 — his refusal to wear makeup before the nation's first-ever televised presidential debate, against John F. Kennedy, practically cost him the bout. Well, during Tuesday night's State of the Union address, President Obama looks to have gone the other direction. Simply put, Obama's State of the Union makeup is damn near glowing, and it's taking some heat on Twitter. The general consensus? He looks kinda orange. And rest assured, this isn't a partisan issue — even some of his ardent supporters seem to think his makeup team could've done a better job on this.

It's a rather dramatic look for President Obama, especially considering who he's sharing the screen with — Speaker of the House John Boehner has long been the subject of discussion for his glowing, orange-y tan (a lot of people assume it's a spray-on tan, though I couldn't possibly speculate). Tonight, however, he's being upstaged by the Commander-in-Chief.

Hey, being under the spotlight is hard sometimes. But rest assured, I don't think he's particularly sweating what people think of his look at this instant — between equal pay, the Cuban embargo, international terrorism, immigration and internet security, its fair to say he's got plenty of better things on his mind during his sixth State of the Union address.