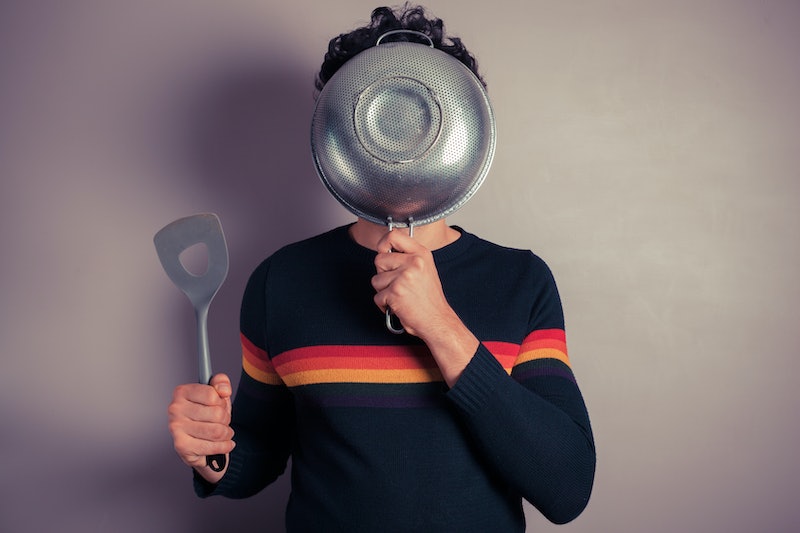 Have you ever been in a situation where someone won't stop badgering you about your relationship status, no matter how many times you ask them to bug off? Well, now you've got some secret ammunition to tuck in your back pocket and deploy as needed: Invisible Boyfriend and Invisible Girlfriend, two apps that will make it look like you've got an amazing relationship and — hopefully — get all those Nosy Nellies out of your face. Although the apps were both introduced back in 2013, they went into public beta this week; being in beta means there are still some bugs to work out, but that's okay. When it's finally finished, this whole thing might end up being kind of awesome.

"Invisible Girlfriend and Invisible Boyfriend are the result of one man's frustration, and a little bit of desperation," says the "Who We Are" post on the apps' blogs; indeed, they've been almost nine years in the making. Continues the post:

"Co-founder Matt Homann was newly divorced and tired of feeling pressured to jump into something new. 'Around Thanksgiving, my mom called me and asked me if she should set an extra place for something I'm bringing,' Matt recalls. 'In that moment I realized how great it would be to have an answer for her that didn't require me to actually be dating someone.'"

Homann subsequently bought the invisibleboyfriend.com and invisiblegirlfriend.com domains — although, according to BetaBeat, it wasn't until 2013 that he finally pitched it as an actual business idea. Since then, Homann and his business partner, Kyle Tabor, have been hard at work with their team getting it off the ground; it finally opened up for widespread usage (again, though, with the beta caveat) yesterday.

There are a lot of apps out there geared toward helping you fake a relationship; Invisible Boyfriend and Girlfriend, though, are a little different. First off, they're not cheap — they both require a subscription fee of $24.99 a month. But there's a reason for that, which, incidentally is the other thing that sets these two apps apart: The detail into which they both go. Those 25 smackeroos gets you 100 texts, 10 voicemails, and one handwritten postcard — which, Homann said, often involve "a real person on the other end of the message." These aren't just sophisticated versions of the chatbots we used to dick around with in the early days of AIM; there's a human touch to a lot of it.

There's a lot of room for customization, too. According to the Daily Dot, you build your imaginary significant other from the ground up: You name them, decide what they look like, figure out their personality, give them some interests, and more. Then, once you've created your "boyfriend" or "girlfriend," the app — or service, really; I would argue that the fact that you spend a lot of the time corresponding with an actual human bumps it up from being just an app — takes over from there. And if $24.99 seems a little pricey to you now, Homann and Tabor also told BetaBeat they're hoping to introduce more service plans at both lower and greater price points in the future. That's what beta is for, after all; they're figuring out what their user base needs and wants.

I think the reason I kind of dig Invisible Boyfriend and Girlfriend, though, is that the point isn't necessarily to make it look like you're super popular and, OMG, you have the best significant other evar!!!11!!!1!; it's to help you get people who won't leave you alone about about when you're going to find a nice girl or boy with whom to settle down your back. In some ways, the apps remind me of Suzanne Heintz's Playing House Project: That, too, grew out of the frustration of the constant scrutiny she and her romantic life faced. You can make the argument that deception isn't the answer, and it'd be perfectly valid one — but at the same time, I would counter that your relationship status isn't anyone else's business. If you've repeatedly asked someone to stop jamming their nose into your love life and they refuse to respect your wishes, all bets are off as far as I'm concerned. Am I a terrible person? Probably, but seriously, people. Stop pressuring everyone else about the state of their relationships. It's not cool.