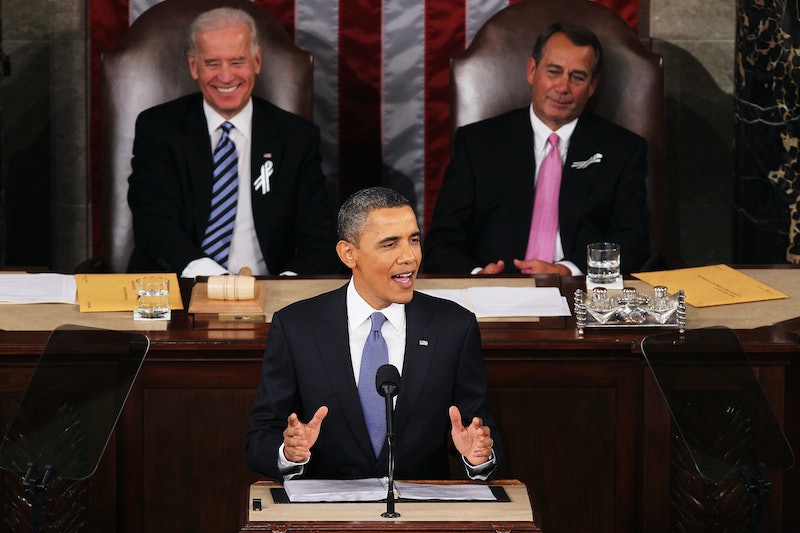 In his sixth and second-to-last State of the Union, President Barack Obama stopped mid-speech 81 times for applause and other interruptions from the crowd, adding an additional 15 minutes of total time to the event. But not all quarters of the Congressional chamber joined in with quite the same degree of fervor. Democrats, while now a minority in both Congressional chambers, led loudly and stood often after the president’s remarks about shifting towards middle-class economics, raising the minimum wage and protecting the environment.

Their counterparts across the aisle, for the most part, remained seated and grim-faced as Obama laid out an expansive progressive agenda for the Democratic Party and his final two years in the presidency.

The rigid partisan cast to the State of the Union, while not unexpected given the sharp political divide in Washington today, prompted a rather sardonic tweet from Rep. Steve Israel (D-NY) from the House floor:

“Who crazy-glued the GOP’s seats?”

From looking at the numbers, one might begin to suspect that some sort of adhesive might have been involved. According to a compilation from ABC News, 23 of the 36 standing ovations that Obama received Tuesday night came solely from Democrats.

In contrast, the one moment in which the GOP representatives proved louder and more enthusiastic than their progressive colleagues would involve Obama’s signaling on new free-trade agreements, tweets Politico reporter Manu Raju.

Partisan applause patterns are not a novel development when it comes to the State of the Union. First conducted in the House chamber by Woodrow Wilson in 1913, the State of the Union has become an increasingly public ritual throughout the 20th century. It wasn’t until the 1980s with the election of Ronald Reagan, however, that the applause that greeted the president’s remarks could be easily mapped along partisan lines.

As New York Magazine’s Andre Tartar recounts, Democratic congressman Dennis Eckart (Oh.) was surprised by how coordinated the GOP’s support appeared to Reagan’s speech one year. Reaching across the aisle, he picked up a copy of the GOP version of the State of the Union and noticed that the applause lines had been pre-marked; on the Democrats’ version, there was only text.

The next year, then-House Speaker Tip O’Neill (D-Mass.) prompted the Democrats to all applaud at one line that seemed to vaguely endorse a large-scale government action. Reagan was taken aback by the synchronized and unexpected noise from the Democratic section, but quickly rejoined that he had thought the Democrats were all reading the newspaper rather than paying attention to his speech. As National Journal's George Condon Jr. concluded:

From that moment, the State of the Union address was changed forever. Duelling standing ovations, often triggered by the most banal comment, were here to stay.

Today’s State of the Unions have become predicatable partisan showcases. One just had to look at Speaker John Boehner (R-Oh.) and his Grinch-like expression throughout the president’s remarks to understand that there would be little to no bipartisan entreaties from the GOP ranks.

Reporters on the House floor relished noting which legislators were applauding or motioning their support for certain policy proposals. Slate’s Dave Weigel summed up the trend succinctly, tweeting:

Weigel also noted that the Republicans remained stone silent through the president’s proposal to make community college free for two years and to reform student loans. In turn, Sabrina Saddiqui from The Huffington Post tweeted that Boehner refused to applaud for marriage equality.

The one moment of unexpected GOP applause came as Obama was winding down his remarks. “I have no more campaigns to run,” the president commented, drawing a wave of mocking applause from the Republican side of the chamber.

But Obama responded quickly with a sharp jab: “I know because I won both of them.”

Cue Biden’s got-ya face and the stampede of Twitter responses.