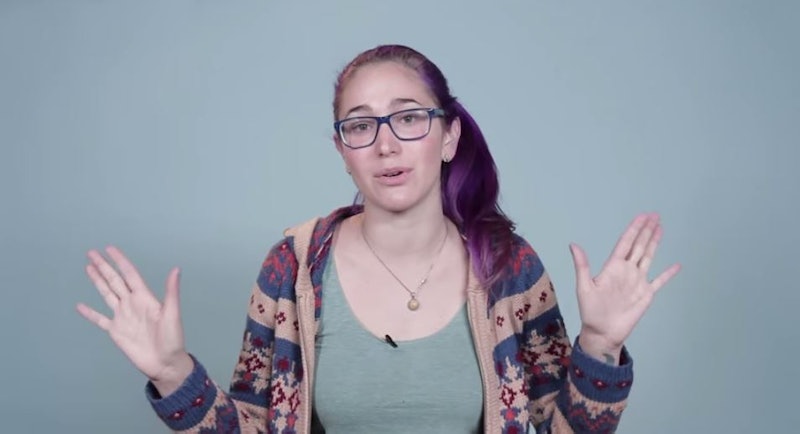 All parents approach giving their kids "the sex talk" — sometimes just known as The Talk — differently. But how would you do it yourself? BuzzFeed asked a bunch of Millennials to give their version of the sex talk to their future kids, and you know what? The results are amazing. Sure, there's some awkwardness and a lot of laughter; at this stage in the game, it's kind of inevitable. But if what this group of adults (which, admittedly, is quite a small sample size, especially since they all work at BuzzFeed...but work with me here) included in their renditions of The Talk is indicative of a larger trend, we're actually in a pretty good spot.

To be honest, I don't actually remember getting The Talk; mostly I just read a lot of books (even as a pre-teen, I was something of an armchair psychologist) and picked up pretty much whatever I needed to know from there. But my parents are the ones who made sure I had access to those books, and I'm sure that if I'd had any questions about what I'd read, they'd have been happy to answer them — we've always been a relatively open family, and as far as we're all concerned, knowledge is power and all that. It actually worked quite well, I think; I learned what I both needed and wanted to know, and to be honest, my books probably knew more about the nitty gritty of how sex (and pretty much everything else surrounding puberty) worked. In any event, there were no Now and Then–style "watering can" debacles, so hoorah for that.

In an effort to break it down a little bit, I've divided the video into "The Five Stages Millennials Go Through When Asked to Give the Sex Talk." You can scroll down to watch the whole thing; for the curious, though, here's what it looks like in five pictures. You know what's most interesting about the whole thing? How The Talk has changed over time. The issues we need to talk about now concern more than just the mechanics of the act, and these five stages definitely reflect that need.

Initial reactions upon being asked to give The Talk to their future children ranged from "Oh man, this is a complicated conversation..." to "I can understand why parents dread this."

Stage 2: "When a Man and Woman Really Love Each Other..."

I know what you're thinking — that's so not the right place to start — but wait for it, because Stage 3 is where it starts to get both interesting and awesome.

The phrase that started Stage 2 — "When a man and a woman really love each other" — started to come out of most people's mouths almost automatically. As soon as they realized they were just reciting words by rote, as well as how outdated the thought those words were expressing are, they all got incredibly invested in making sure they covered everything they needed to. Society has evolved (even though we've still got a long way to go), so we can't use "when a man and a woman blah blah blah" as a jumping off point anymore.

Here are the kinds of things they all started stressing when they began to hit their stride:

Yes. This. All of this, and so much more.

Stage 5: The Importance of the Talk

The last portion of the video involved answering questions about why The Talk is important, and what we can do to make it less awkward. My favorite answer to the former was, "Sex isn't just a conversation about an activity. It's about identity, and gender issues, and emotional relationships between people"; meanwhile, in response to the latter, everyone said it was about erasing the shame and the stigma associated with sex. None of this is shameful, so the more we work toward normalizing it, the better off we'll be. It won't be awkward anymore, and we'll all probably be healthier and happier for it.

So this is what I mean about the video being uplifting: If these are the sorts of things we aim to pass on to all the kids who arrive on this planet after us, we'll be in good shape. They promote a healthy attitude toward sex and sexuality, and that's awesome. A plus, guys. Seriously. Good work. You're an inspiration to us all.