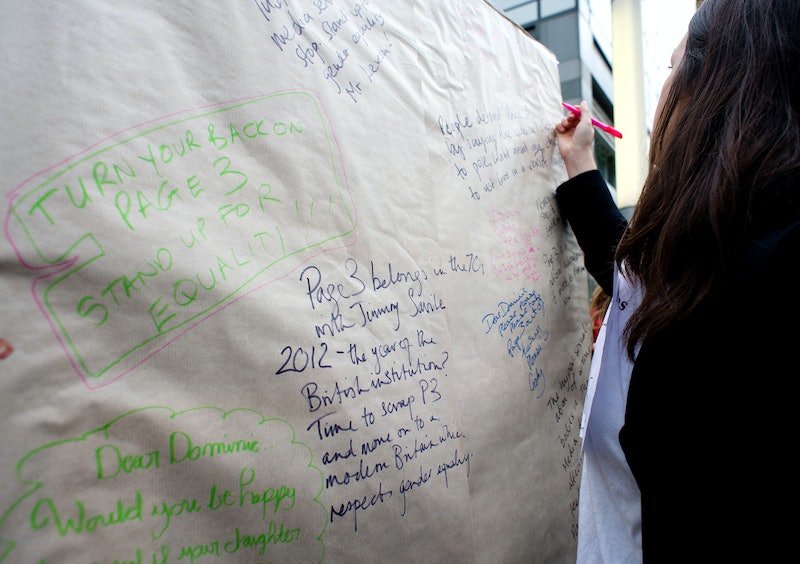 Earlier this week, British tabloid The Sun, known for its topless female models on Page 3, decided it was going to, well, get rid of its topless models. In a clandestine meeting, executives at the Rupert Murdoch-owned tabloid reportedly chose to cover up the Page 3 models following a decades-long campaign by British feminists to stop the sexist practice. However, the decision to stop publishing photos of topless women was apparently short-lived.

After three days of not including any naked women in its newsprint, The Sun tweeted a photo of Page 3 of its Thursday issue. And yes, you guessed it — the topless models are back. The newspaper's tweet shows a topless blonde woman with the headline, "Clarifications and Corrections."

Below the picture, The Sun included this explanation:

Further to recent reports in all other media outlets, we would like to clarify that this is Page 3 and this is a picture of Nicole, 22, from Bournemouth. We would like to apologise on behalf of the print and broadcast journalists who have spent the last two days talking and writing about us.

Immediately after The Sun sent out the topless tweet, the No More Page 3 campaign said "the fight might be back on." No More Page 3 has been pushing for the end of the topless photos since 2012, saying in a statement on its website that it's "sexist" and "sad" that the most-circulated publication in Great Britain chooses to show women only with their shirts (and bras) off.

So, was this whole thing a stunt to nab more attention for the already attention-loving tabloid? Or does The Sun still have plans to ditch the practice? Sun executives have yet to comment on Thursday's controversial Page 3, and have been avoiding some of Britain's biggest media outlets, including The Guardian. However, a spokesperson for the tabloid did send this cryptic statement to the The Times (U.K.) on Monday when it was first reported that the topless models had been dropped:

Page 3 of The Sun is where it’s always been, between pages 2 and 4, and you can find Lucy from Warwick at Page3.com.

Of course, many Britons, including Dr. Sarah Wollaston, a Member of Parliament, aren't down with the joke.

Maybe The Sun enjoyed stirring the pot this week a little too much. The controversy pitted British feminists against the female nude models, some of whom attacked the anti-Page 3 women for trying to police what they do with their bodies. Women who have posed topless for The Sun in the past spoke out this week, calling feminists hypocritical for taking jobs and bodily autonomy away from the models.

Why should feminist women then tell other women how to live their lives? Women fought together to get the vote and so on and so forth, so why should women now be fighting each other, and tell each other what job roles to now take within the industry?

"Telling girls they shouldn’t do Page 3 is not being a feminist," Jodie Marsh, another former Page 3 model, added to the news source.

Even Piers Morgan, who once worked as an editor of The Sun, jumped into the fray Wednesday night, trying to stand up for the topless models with a pseudo-feminist statement on body-image positivity. But mostly, it just sounds like he likes looking at topless women in newspapers.

Morgan is right that fashion magazines place unrealistic beauty and body standards on girls and women, and it is a problem — except it shouldn't be lumped in with Page 3. At the core of this argument — which feminists have called "sexist" and Page 3 models have taunted as "prudish" — is not when can a woman pose for a naked photograph, but where and why. Does including a topless women, without context, in a daily newspaper serve any other purpose than voyeurism? And if the message is so innocent — we're not objectifying women, we're just celebrating their bodies — then why doesn't The Sun include, I don't know, bottomless men on Page 4? Equal opportunity, right?

No More Page 3 had the best, succinct responses to this feminist debate…