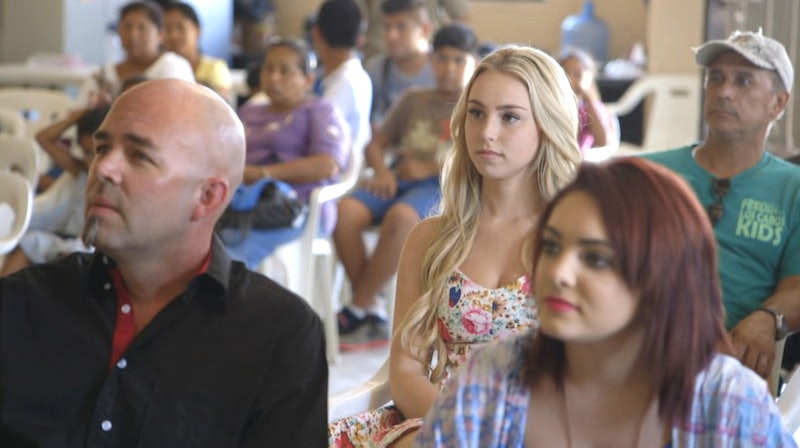 For some, going to the hot, humid Cabo San Lucas in August to do manual work might seem undesirable. But to the cast of Lifetime's Preachers' Daughters , especially Kayla Wilde, going to Mexico at the end of summer to perform mission work was exactly what the preacher ordered. Season 3 premieres on Jan. 23 at 10 p.m., showing the nine preachers' daughters (some granddaughters) who will embark on a six-week mission trip in Cabo. For some, the purpose of the trip was to spread the word of Christianity, but for Kayla it was to reconnect with the past. "I grew up in Mexico doing mission work...I wanted to go back to basics," Kayla tells me in an interview.

Kayla, whose mother first introduced her to mission work in Mexico at a young age, looked forward to returning to the country. "I wanted to do some mission work, and do stuff for others," Kayla says. "I wasn't really going in with the intention of becoming a Christian again...It was more for personal fulfillment, than a spiritual fulfillment."

Adapting to Mexico was difficult for some of the girls. Between the weather and the hard work, for some, it was almost too much to handle. That wasn't the case for Kayla. Returning to Mexico was actually easy for her, as she tells me, "It was like being home in a way."

Of course, Kayla enjoyed other aspects of the trip too. "I was excited to go out and not be under my mom's supervision," she explains. After all, she is 20-year-old woman taking a trip to Cabo — who wouldn't look forward to that?

However, the trip wasn't all positive. Kayla explains that she didn't get along with everyone in the house, especially Lolly. "From the second I saw her, I didn't really click with her," she says, though she did make a great friend in Meagan. "We kind of formed our own unique bond in the house," Kayla says. But she gained a lot from the experience, even the more difficult parts, as Kayla says she learned that she needs to control her anger better, "and not direct it at certain people and lose control." You can watch Kayla get back to basics and learn some lessons along the way when Preachers' Daughters returns for Season 3 on Jan. 22.

More like this
Jesse Tyler Ferguson Had A Funny Run-In With A Fellow ‘Modern Family’ Alum
By Grace Wehniainen
'Stranger Things' Cast Thinks It's "OK Not To Label" Will Byers' Sexuality
By Alyssa Lapid
20 Photos Of "Beefy" Jeremy Allen White To Tempt You To Watch 'The Bear'
By Radhika Menon
What Is the Net Worth Of Each 'Stranger Things' Season 4 Cast Member?
By Hugh McIntyre
Get Even More From Bustle — Sign Up For The Newsletter