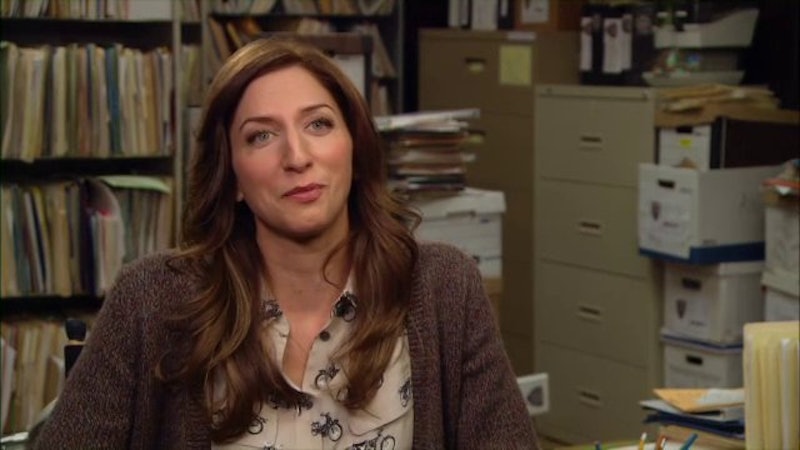 Brooklyn Nine-Nine is easily shaping up to be the funniest new comedy series of the fall season, but that doesn't mean it's without its flaws. Andy Samberg delivers laughs as the talented but infantile Detective Jake Peralta and Andre Braugher's stoic, highly disciplined Captain Ray Holt keeps the sitcom grounded; yet, their dynamic still doesn't feel solid, and the writing tends to skew too zany for a show that aims to include meaningful shenanigans while still maintaining the atmosphere of a somewhat relatable, realistic workplace setting. However, there is one element of Brooklyn Nine-Nine that doesn't need any work at all: Chelsea Peretti.

Her crazy hilarious role as slightly off civilian administrator, Gina Linetti, outshines the best performances and compensates for the worst. To sum up Linetti, she loves dancing, psychics, and tormenting Detective Boyle about his unrequited crush on Detective Diaz. She's also responsible for some of the most memorable lines of the season thus far.

But Chelsea Peretti isn't just a star on Brooklyn Nine-Nine, she's a real comedy superstar, period. In addition to performing as a highly lauded stand-up comedian, Peretti used to write for Parks and Recreation (if that doesn't up her comedy cred, I don't know what will), and she's appeared on Louie, Kroll Show, and China, IL.

More importantly, she is one of the fastest rising comedians in the industry, with her web series Making Friends and All My Exes consistently garnering thousands of views, as well as significant fanfare, and her podcast "Call Chelsea Peretti" frequently earning the top podcast spot on iTunes. If her perfect performance on Brooklyn Nine-Nine or her killer web series aren't enough to sell you on this girl, then I know one thing that will. Peretti, drumroll please, is the creator of the greatest website of all time, BlackPeopleLoveUs.com. Here's one of my favorite All My Exes bits: