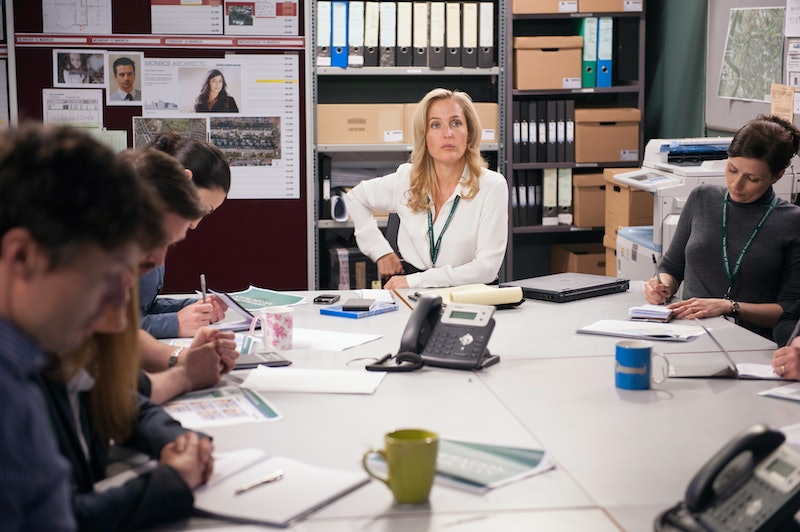 What's your criteria for a great female character? Intelligent, passionate, determined, complicated. Ultimately, it comes down to a character feeling like a real person with her own internal landscape and goals. All of this can describe Detective Superintendent Stella Gibson, the lead character Gillian Anderson plays on The Fall. Stella has become feminist icon breaking up the monotonous mix of gloomy white dudes that usually dominate crime shows. But comparing Stella to Dana Scully is just unfair. Dana Scully from The X-Files is '90s feminist icon. We also saw Dana develop over nine seasons and a few movies. Thus far we've only seen Stella in two seasons. Season 2 of The Fall which is now up on Netflix continues to prove that Stella is an amazing character. But what does the actress who plays her think?

But it seems like Anderson may like Stella from The Fall a bit better. In an interview with the Associated Press she says,

The script for The Fall was very different than anything I’ve read before, and I felt that Stella was about as complex a character as I ever encountered. That appeals to me. Even after the second season, after we do get hints here and there, maybe bits of her past, you’re still asking the question who is she and what makes her tick?

Why don't we decide for ourselves, though? Is Stella Gibson from The Fall or Dana Scully from The X-Files the better character?

Well, if I'm being honest, I really can't choose so let's just celebrate these badass dames!

They're Dedicated to Their Careers

One of the major reasons I love these characters is how dedicated they are to their careers. Helping people and making sense of the craziness of the world (and beyond) also really informs their characters a great deal.

Stella Gibson is an indisputable, crime solving goddess. She has truly no-string-attached sex. She kicks the patriarchy in the face. She is immensely well-written and I'm not the only one who is kinda obsessed with her.

In an interview with the Hollywood Reporter Gillian Anderson says her character on The Fall has affected her personal life, "I do feel like she has awakened a comfortability with my sexuality and with myself as a sexual being as a woman."

Dana Scully is a great character striving for a sense of balance amongst her desires as an FBI agent and a woman. She's also the rational partner inverting what you would expect of the dynamic between her and Fox Mulder. She deals with trauma of being swept up in larger forces; aliens, angels, witches you name it and Scully has faced them.

She is the heart and soul of The X-Files bringing a clear eyed perspective and warmth to a notably bonkers show. Still, I would never call The X-Files a feminist show. But an argument can be made that The Fall is.

They're Both Badasses in Different Ways

I know I am not the only one who grew up in love with Dana Scully. For every book smart, off kilter girl growing up in the 1990s and early 2000s Scully was a beacon of hope for me in my teens year rewatching the show. Scully is smart, kind, complicated, and doesn't back down from Mulder.

But, Stella Gibson is the kind of fictional mentor I need now in my mid twenties. Stella first comes across as hard edged, even cold. But then you quickly realize she cares immensely for the victims of serial killer Paul Spector and gives them a sense of humanity the press doesn't.

She also knows exactly what she wants and goes after it. She's an aspirational feminist figure with vulnerabilities. Basically, Stella is a boss. Dana Scully and Stella Gibson are badasses that contain multitudes. They eschew stereotypes while playing around in genres that are usually dude heavy. What more can you ask for?