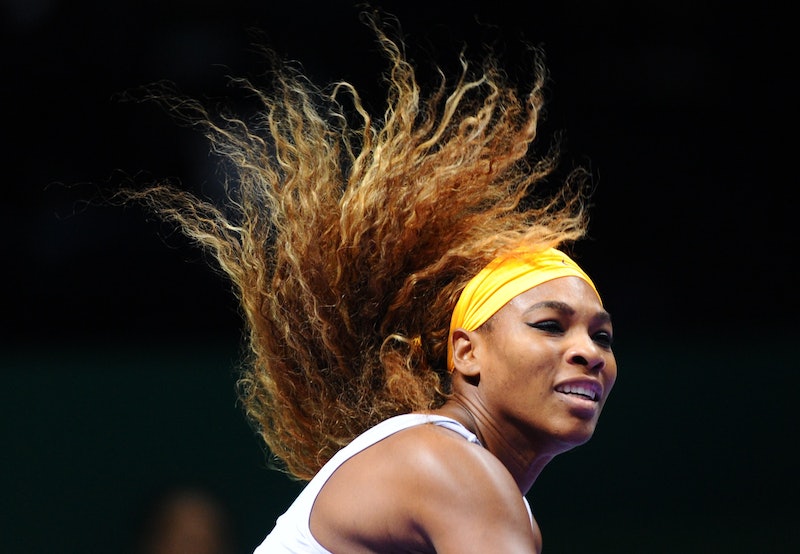 Sometimes the best way to deal with sexism is to ignore it, not because you don't care but because you're above that nonsense. That's what happened during the post-match interviews at the Australian Open when a reporter asked Serena Williams to twirl, and the world's No. 1 female tennis player didn't bother to dignify his incredibly sexist question. But before she dismissed him like an opponent on the court, she made a very astute observation that revealed her true thoughts on sexism. Basically, the perfect response to such an asinine question.

On Thursday, after Williams had just beaten Vera Zvonareva in the second round at the Australian Open in Melbourne, Channel 7 tennis commentator Ian Cohen asked her to "give a twirl" in her tennis outfit. Yeah, creepy. The American tennis champ was clearly not amused. When asked about the experience later, she told the Press Association:

I didn’t really want to twirl because I was just like, you know, I don’t need all the extra attention. But, yeah, it was fine.I don’t think and look that deep into it. Life is far too short to focus on that. We have so many other problems we want to deal with that we should focus on. Whether I twirl or not, it’s not the end of the world. It’s about being positive and just moving forward.

When asked about the sexist connotations of the question, Serena made it clear that the incident didn't deserve a second thought, saying, "Whether it’s sexist or not, I don’t know. I can’t answer that." But she did bring up a very good point:

I wouldn’t ask Rafa (Nadal) or Roger (Federer) to twirl.

Good point, indeed. In brushing off the reporter's silly question, she actually spoke volumes on the double standard that still exists in professional sports, a standard that treats female players like objects to ogle rather than the talented athletes that they are.

The day before, the same TV reporter had also asked Canadian tennis pro Eugenie Bouchard to do the same thing after she had defeated Kiki Bertens. He asked her, "Can you give us a twirl and tell us about your outfit?" Visibly shocked, Bouchard double-checked, "A twirl?" Cohen confirmed, "A twirl, like a pirouette, here we go." Bouchard obliges, but is clearly embarrassed. Again, would you ask Novak Djokovic to pirouette??

Like Williams, Bouchard was also creeped out by the whole experience. She later told reporters:

It was very unexpected. I mean, yeah, I don't know. An old guy asking you to twirl, it was funny.

But clearly not "funny ha-ha." More like "funny feeling in my stomach, oh wait, it's nausea."

Perhaps Cohen felt compelled to ask Williams to twirl because she and her sister often step onto the court in unconventionally fierce outfits, and Serena herself is a fashion designer when she's not playing tennis. But if one thing is clear it's that when she has a racket in her hand that's all she's focused on. It's too bad you couldn't say the same about the tennis commentator.