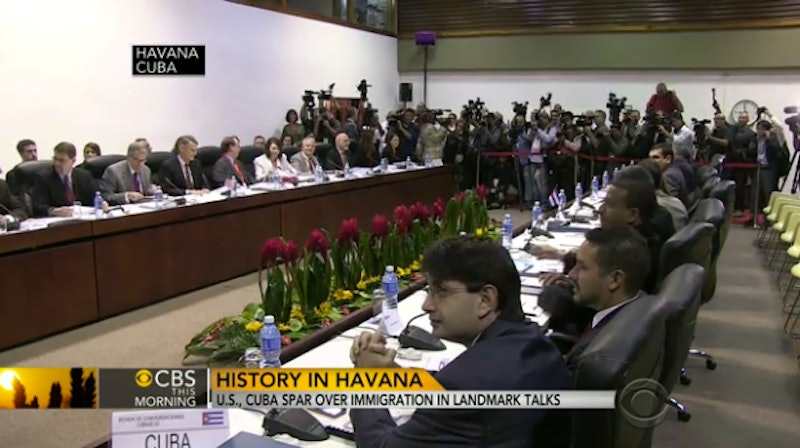 When President Obama announced the thawing of U.S-Cuba relations in December, it was met with skepticism. More than that, many people lauded the move as decades of a Cuban isolationist policy have done little in the way of progress between the two countries. However, as with any major change, time, patience and compromise are key in successful negotiations, and in its first session of high-level talks, the U.S. and Cuba clashed over immigration policy on Wednesday in Havana, one of the surely many more stumbling blocks on the path to normalizing relations.

The U.S., long a destination for defecting Cubans, vowed to continue its "wet foot/dry foot" policy — in which Cubans intercepted by U.S. law enforcement in the sea are sent back to their country, whereas those who have set foot on American land are allowed to stay — and grant Cubans protections that are not extended to other nationalities. Reuters reported that Alex Lee, who is leading the U.S. negotiation team, remained steadfast about the Cuban Adjustment Act, of which the "wet foot/dry foot" policy is a part. Lee said:

We explained to the Cuban government that our government is completely committed to upholding the Cuban Adjustment Act, that the sets of migration-related policies that are colloquially known as wet foot/dry foot very much remain in effect.

Cuba, on the other hand, resents the policy. Josefina Vidal, head of the Cuban team in negotiations, said that its continuation not only condoned dangerous and illegal travel — many make the journey by sea in flimsy boats — it also encouraged Cuban doctors, the pride of the country, to defect, causing "reprehensible brain drain."

Despite the deep differences, both sides hailed the first round of high-level negotiations as productive and constructive. Thursday's talks will focus on re-opening U.S. and Cuban embassies in both countries. The U.S. is looking for Cuba to reaccredit its diplomats and lift travel restrictions for them on the island, as well as ease shipments to the US mission and lift a limit on personnel.

In Obama's State of the Union speech on Tuesday evening, the president highlighted the importance of new U.S.-Cuba relations, saying that engaging the tiny nation south of Florida in discussions could potentially "end a legacy of mistrust" in the region. He also called on Congress to end the embargo, although there is, as expected, strong Republican opposition to the entire deal itself, largely in the form of Sen. Marco Rubio, himself a Cuban American.

Despite internal opposition, these high-level talks, if successful, could serve as justification of Obama's move to normalize relations with Cuba after decades of what he called a "failed policy" having done more harm to the Cuban population than it ever has served its purpose of bending the Castro administration to the U.S.' will.