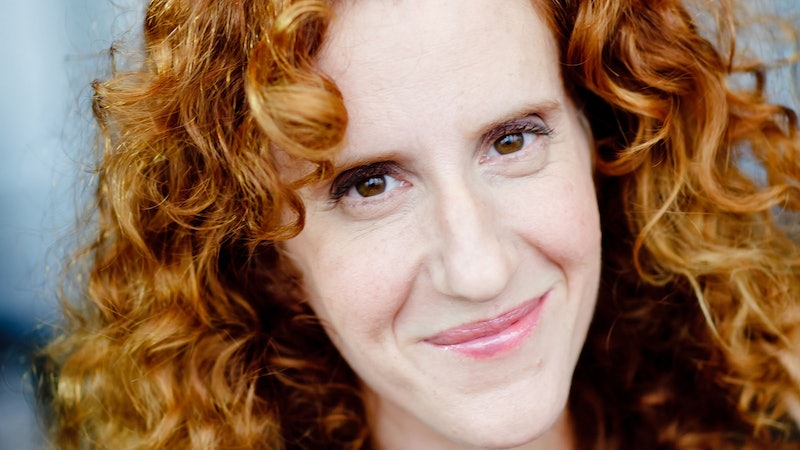 Gayle Forman broke out as one of the masters of young adult literature with 2009's If I Stay, a heartbreaking, but inspiring story that had a whole lot to say about the strength of the human spirit. That same theme echoes throughout her latest novel, I Was Here, which, like much of her work, takes tragedy, guilt, friendship, inspiration, heartache, and bravery and mixes them all up in a blender of feelings that will have you unsure if you should fist pump or rain tears all over your copy of the book. (Though probably both.)

I Was Here, like If I Stay, centers on the the teetering point between life and death. Except in I Was Here, that death has already occurred, and it instead tells the story of how one teenager's suicide has a ripple effect through everyone connected to her. Meg was fun, outgoing, and had a spirit that could not be tamed. Which is why when her friend Cody got her suicide note via time-delayed email, she was shocked. As Cody tries to unravel the mystery behind Meg's sudden choice, she starts to find that maybe there are no good guys or bad guys behind every death.

Forman talked with me about why this book isn't a suicide book, despite it containing so much about suicide, the great heartbreaks in her life, and what she has in store for us next. And don't worry, there are more books coming.

Bustle: I Was Here hits on so many important issues facing teenagers today, including suicide. I know you’ve said before you do a lot of research for books, what kind of research did you do for I Was Here — and what did you learn along the way?

Forman: The research for I Was Here was done years before the book idea came to me, inadvertently. Part of the inspiration for the book was from an article I did when I was a journalist, and it was an oral history of women and suicide. I talked to friends and family of women who had taken their lives, and of one woman who had attempted to. One of these young women was Suzy Gonzales, and it was a jarring thing talking to her friends and family because I kept feeling like I was talking to people for a profile of a young woman who had done something extraordinary at a very precocious age — like she directed her own film, or was a front woman for a band on the rise, or had written a novel everybody was talking about — because everything I saw about her, from what people showed me, she had that spark. So I kept having to reel myself back and remember that I'm profiling her because she committed suicide.

And there were circumstances around her suicide that were heartbreaking — the fact that she was so charismatic made it jarring to people who knew her, too, so it really came as a shock, even though she was battling depression and she had been involved with a suicide "support" group that had championed her decision to end her own life.

What got me thinking about this article years later was the suicide note Suzy had sent on a time-delay email, so that by the time it arrived, she had already ended her life. And I started to think what it would be like to get an email like that from somebody when you really just didn't have any idea. And that's where I landed on my character Cody.

I Was Here is interesting in that it’s as much of a mystery as anything — but it’s also unique in that you've set up a mystery that doesn't really have an answer. It was a mystery born out of survivor’s guilt.

Well that's exactly right. Suicide is the ultimate mystery. The victim and the perpetrator, they die together. And you can never solve that mystery. That's why, without giving away the ending, there is not this same kind of definitive, "The bad guy did it!" that you would find in a more traditional mystery because it just doesn't work that way with suicide.

You've asked fans and readers to take pictures and post them with the hashtag #IWasHere — could you talk a little bit about that and what that means?

It's strange to say that this is not a book about suicide because we're going to talk about suicide a lot. But I don't think it is. Ultimately this book is about Cody and her resilience and her finding the strength for forgiveness and understanding.

That's where #IWasHere is a rallying cry, recognizing the things you've done that have already had a ripple effect and made a mark on the world. You already do matter so much. And so wanting to get readers to realize that, we asked, what are those moments where you've already made your existence in this world known, no matter how brief? Because they matter hugely. And most of these moments are connected to other people — to friends and family and the people that you love. And that is where your being here truly matters.

You could say the book is about suicide, but really you could say it's about the friendship between Cody and Meg. I was just wondering if there was anything you wanted young women, or older women, to take away from that story of friendship?

I'm so glad you asked this because it's something I've been thinking about a lot lately. The great heartbreaks of my life have always been my friends, mostly my female friends. I have had my heart broken so much more by my platonic girlfriends than I ever had by any of my romantic entanglements, and it started when I was 12 and continued into my 30s. And it's been such a fraught thing because there was never the language to talk about those relationships, like a friendship is somehow inferior to romantic relationships. But these are deeply intimate relationships. And I think for a lot of young women, their first loves, no matter what their sexuality is, is their platonic friendships. Anything that intense is going to have a fall-out and be messy.

And you’ve been super busy in the last few years, what’s next for you?

The vacation for me is writing. That sounds crazy, but being able to get lost in a story — that is the vacation. Right now I'm working on two projects at once, which is something I've never officially done before. Though I did do it on the sly with I Was Here, because I wrote it while I was working on Just One Day and Just One Year and I called it my "affair book" because it was this secret, illicit thing. I had these two books I was married to, it was all official with contracts and deadlines, and then there was a book I was sneak away and have two delightful hours with.

I realized that model may not be a bad idea after all because the energy that I got from writing I Was Here fed into Just One Day and Just One Year, which were challenging for me. So right now I'm working on two different projects, spending a week on one and then a week on the other. It's amazing, when I return to the other one the well has filled up with so much excitement and I spill all that.