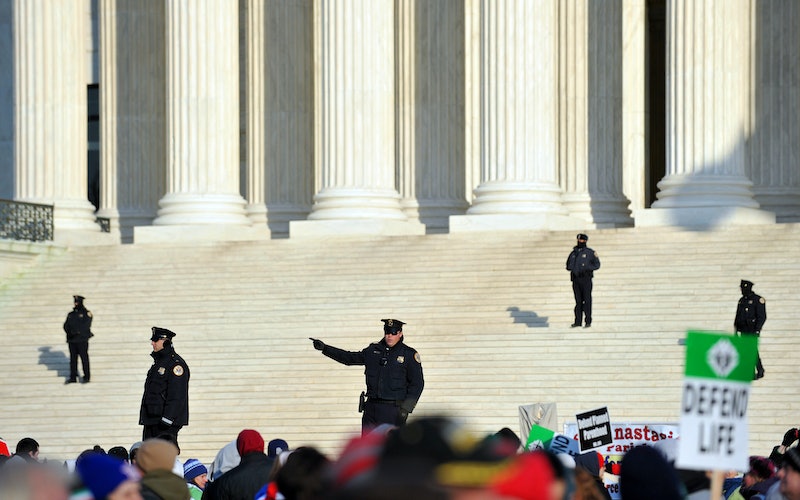 Thursday marks the 42nd anniversary of Roe v. Wade , the landmark Supreme Court decision that said the constitutional right to privacy extended to a woman's right to choose. At the time of the historic decision, 31 states had abortion restrictions, rendering the procedure legal only in cases of rape, incest, or when a woman's life was at risk. When the 7-2 decision was handed down, those abortion bans crumbled instantaneously, granting women in all 50 states access to legal abortion.

As we know, abortion rights would continue to be up for debate. The National Right to Life Committee was created five years before Roe v. Wade, and the group's fellow abortion foes, led by the Catholic Church, swiftly mobilized under the term "pro-life." In fact, the U.S. Conference of Catholic Bishops responded to Roe with the Human Life Amendment, which would have essentially granted fetal personhood and outlawed abortion in all 50 states.

The movement to criminalize abortion and extend full rights to the unborn continues more than 40 years later, as politicians and religious leaders maintain that a woman's right to choose can be policed and restricted. According to the Guttmacher Institute, more than 200 abortion restrictions were enacted across America over the last four years. Many of these restrictions are known as TRAP laws meant to shut down abortion clinics, effectively leaving women in many parts of the United States without a choice.

On Thursday, the House of Representatives even commemorated the anniversary of Roe v. Wade by introducing a new federal abortion bill HR 7, which would restrict access to abortion among low-income women. Another anti-abortion bill — a 20-week ban — was scheduled for a vote on Thursday, but was temporarily shelved. We might have Roe v. Wade in place, but just how far will it hold?

Here's a look at what politicians and activists are saying about Roe at 42 — and just how far abortion rights in America has left to go...