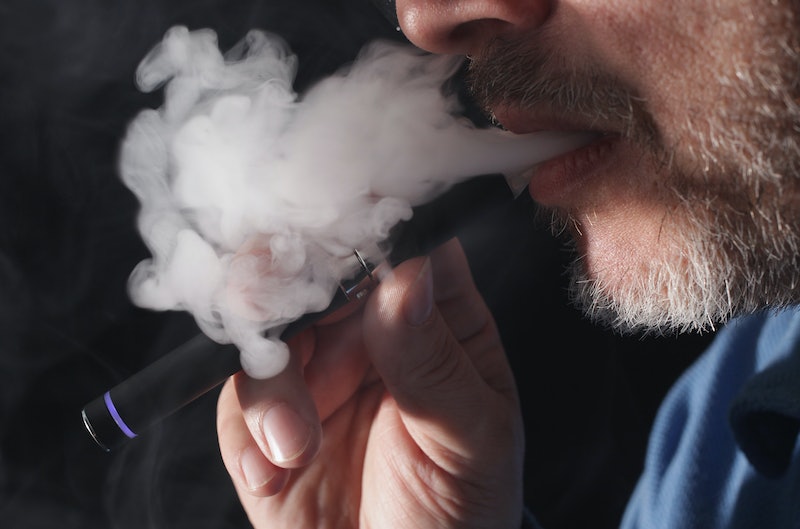 They're often considered to be the safer alternative to regular cigarettes — how could they kill you when they taste like strawberry?! — but a new study finds that e-cigs could potentially be more dangerous. Researchers found that electronic cigarettes produce the carcinogen formaldehyde, and under certain circumstances, produce significantly more of it than tobacco cigarettes. Though the study wasn't completely conclusive about the health risks of electronic cigarettes, it raises some important concerns over how little we know about their contents.

In the study, which was published as a letter in the New England Journal of Medicine, the authors tested a variety of e-cigarette liquids and found that they produced a type formaldehyde that had not been previously detected when the heating on the cigarettes' tank systems was cranked up. The scientists tested vapor produced from 10 puffs of each e-cig, finding that when the device was used on the low-voltage setting of 3.3 volts, no formaldehyde was detected. However, when they turned up the setting to 5 volts, they measured 380 micrograms of formaldehyde per vapor sample.

In fact, the study calculated that being exposed to this formaldehyde would make a long-term e-cig smoker's chances of getting cancer five to 15 times more than that of a regular smoker.

However, the study did not make any conclusions on the health risks of e-cigarettes in general. The intention was more to start a conversation about how little is known about e-cigarettes, what's in them, and what regulatory guidelines manufacturers follow. Study co-author James Pankow said in a statement:

No one should assume e-cigarettes are safe. For conventional cigarettes, once people become addicted, it takes numerous years of smoking to result in a high risk of lung cancer and other severe disease; it will probably take five to 10 years to start to see whether e-cigarettes are truly as safe as some people believe them to be.

If formaldehyde sounds familiar, it's because you've likely seen it — or smelled it — elsewhere before. It's that smelly chemical used to embalm dead bodies and preserve animals for dissection. It's found in building materials and household products, and is a byproduct of cooking and smoking. And it's also a human carcinogen, or a substance that can cause cancer. According to the National Cancer Institute, formaldehyde exposure has been linked to several cancers, including nasopharyngeal cancer and leukemia.

Discovering this substance in e-cigs is enlightening, right? Not everyone thought so. The e-cig advocacy group American Vaping Association shot back that the study's findings drew unfair conclusions based on vaping techniques that nobody would practice in real life. The organization's lawyer, Gregory Conley, wrote in a statement:

The researchers either did not know or did not care to understand the implications of using improper methodology.

Still, it's always better to be aware of the potential dangers of a product, especially when that product was essentially invented under the guise of "smoking safely."