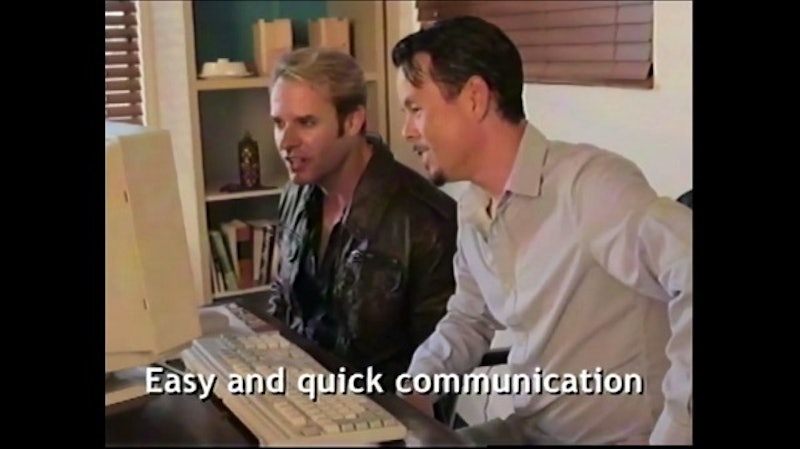 Brent Weinbach has just posed (and answered) the existential question of our age: What would life have been like if social media was around in the 1990s? Would Zack Morris have been issuing friend requests from his giant cell phone? Would N’SYNC’s megahit “Bye, Bye, Bye” have been “Unfollow, Unfollow, Unfollow”? (OK, that was weak, but bear with me.) Would I have had a Facebook page covered entirely with Alanis Morissette lyrics and Daria videos? (Yes, almost certainly.)

In his recent video, Weinbach, a stand-up comedian from Los Angeles, imagines how “The Facebook” would have been advertised circa 1995. He perfectly captures the stilted acting, awkward graphics, and distinctively bland music of 90s-era infomercials, while slyly skewering the pitfalls of the social media age. (Why, yes, a Facebook message is just as good as sending your mother a package!) Weinbach’s depiction of the look, feel, and sound of 1990s advertising is almost eerily accurate, a feat that is not so surprising when you realize that he is spoofing an actual America Online commercial from 1995, which is retroactively hilarious in its own right.

Finally, I know the bit about having Facebook photos printed on the side of a mug is a joke, but I would honestly like that feature to be available. (Seriously, what could be better than having an entire set of mugs decorated with your own selfies?) Mr. Zuckerberg, if you could make this happen, that would be great. Thanks!

More like this
American Girl Doll Memes Are Going Viral On Instagram & Tiktok
By Emma Carey
Taco Bell Announced A Crunchwrap & Tostada Made With Cheez-Its
By Emma Garza
What Is A “Softboy?” The TikTok Term & Aesthetic, Explained
By Courtney Young
Why Are TikTokers Slapping Each Other With Tortillas?
By Courtney Young
Get Even More From Bustle — Sign Up For The Newsletter