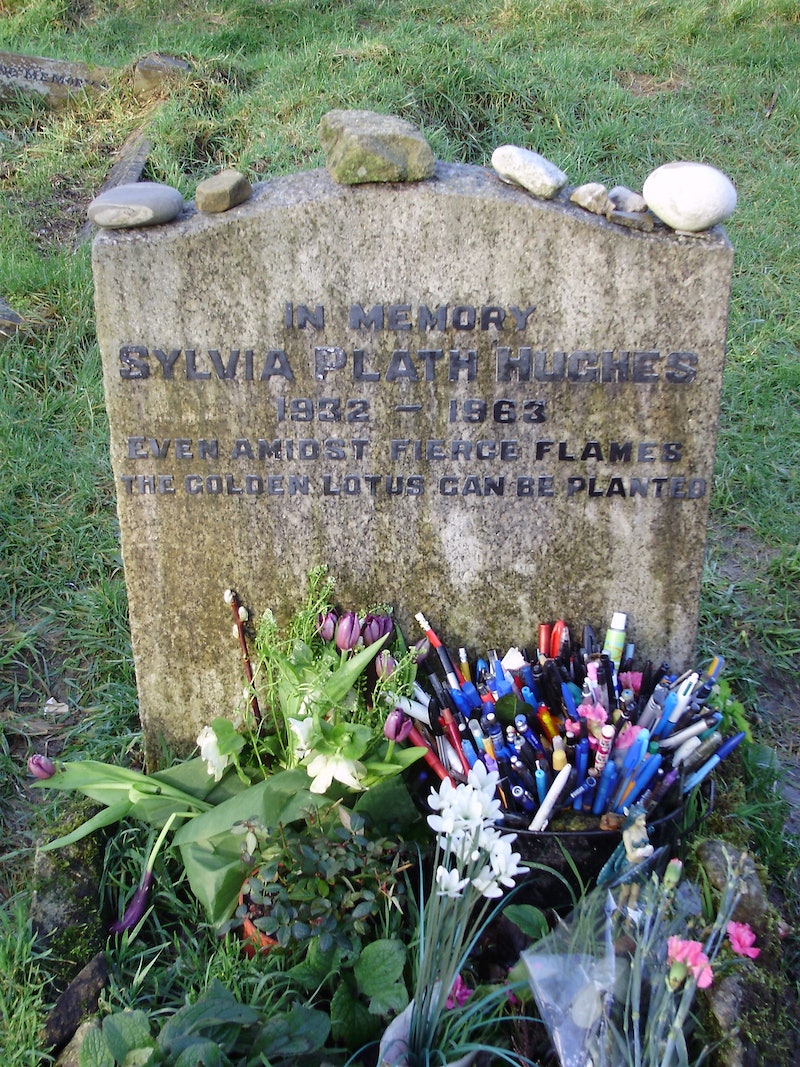 February is a bittersweet time for Sylvia Plath fans. It's the anniversary of her suicide — she took her life on February 11, 1963 — but it's also the same month during which she published the incredible Ariel, her final collection of poems. (She wrote her mother that the book would “make my name.”) In fact, 2015 marks the 50th anniversary of Ariel — and, well, we are still talking about Plath, aren't we?

Plath has become such an icon since her death that often her reputation gets in the way of any kind of true knowledge or appreciation of her work. There's quite a lot to know about the writer, which you can discover through combing through her body of work, as well as her backstory. So, let's do it.

This list contains books written by Plath (her poetry, fiction, letters and diaries) that will give you an idea of the ongoing war between the public and private personas she cultivated in her work and her personal life. It also contains several books on Plath written by others — including Diane Middlebrook’s essential biography of Ted Hughes’ life as “ Her Husband ,” and Janet Malcolm’s devastating investigation into the Plath industry with The Silent Woman . Elizabeth Winder gives social and historical context to Plath’s work in Pain, Parties, Work , describing Plath’s time in New York as an intern at Mademoiselle in New York City, and Kate Moses’ Wintering is a fictionalized account of Plath’s last three months writing Ariel in Devon, England.

Whether you’re already an established Plath fan or a reader curious to know more, here are 10 titles you’ll want to add to your shelves.

In “Kindness,” Plath writes, “the blood jet is poetry / there is no stopping it.” Though she had been writing poetry nearly her entire life, Ariel is without a doubt her crowning achievement. She wrote these poems after she had separated from her husband Ted Hughes. Living in the countryside in Devon, she would wake up every morning as early as 3 a.m. to get in a few drafts before her children would wake. After her death, Ted Hughes rearranged her intended order to the contents of Ariel, even omitting some poems — that version is the one you’ll find from Harper Perennial Classics. But in 2004, Plath’s daughter Frieda Hughes released Ariel: The Restored Version, which presents the book in the order that Plath intended.

Plath’s only novel, The Bell Jar, recently celebrated its 52nd birthday. Providing release and succor to disillusioned young men and women everywhere, The Bell Jar has become required reading for nearly every high schooler, wading through the murky waters of mental illness, cynicism, expectations and failure. Plath originally published the novel (which was rejected several times by both American and English publishers) under a pseudonym, Victoria Lucas, as the book is largely autobiographical.

Plath was an obsessive diarist and her journals are a remarkable record of her most private thoughts, dating back to her teenage years. In 1982 Harper Collins released an abridged version — omitting a great deal of what Plath’s mother and Hughes determined to be “messy” details. Luckily editor Karen V. Kukil restored the journals for publication in 2000, including fragments of Plath’s time working as a file clerk in a mental institution, letters to her ex-boyfriend Richard Sassoon, and above all, her struggle to fashion herself into the best writer and poet she could be.Click here to buy.

Again, the collection of letters between Plath and her mother present a very different picture — the picture Plath wanted to present to her mother while she was living away from home, first at Smith College, and then at Cambridge, and into her marriage with Hughes. It’s a fascinating record of Plath’s activities. But what’s truly interesting is to read the unabridged journals alongside the letters — then you get a sense of what was really going on in Plath’s life as opposed to what she was telling her worried mother back in America.

Johnny Panic and the Bible of Dreams by Sylvia Plath

Most people don’t realize that Plath wrote quite a bit of short fiction, especially as a young writer. She was published several times by Seventeen and Mademoiselle — these stories eventually led to her internship at Mademoiselle, and that experience in New York would become the inspiration for The Bell Jar. Several of the stories in this collection could be parts of her second novel, Falcon Yard. (After discovering Hughes’ infidelity, the myth is she burned this manuscript). Other fantastic entries include “The 59th Bear,” the story of a dissolving marriage, and “Ocean 1212-W,” a reminiscence of her time as a young girl at her grandmother’s house by the sea. This collection of twenty pieces of short fiction, gathered together by Ted Hughes, is out of print, but easily findable in used copies online.

For those interested in Plath’s time in New York City during her internship at Mademoiselle in the summer of 1953, Elizabeth Winder has written a well-researched book about Plath’s experiences and the cultural atmosphere in the city at the time. Pain, Parties, and Work illuminates just how difficult it was for Plath to be taken seriously as a writer at the time — when the only topics considered appropriate for female writers were entertaining and housekeeping.

Her Husband by Diane Middlebrook

Plath’s work and legacy is basically inextricable from the break-up of her marriage with Ted Hughes and her tragic suicide at the age of 30. Scholar Diane Middlebrook’s stunning work of biography, published in 2003, tracks things from the point of view of Hughes, the title indicating that he will forever be known as “her husband.” This is an absolutely thrilling portrait of a marriage between two brilliant poets, and follows Hughes’ even after Plath’s suicide and his experiences both as a writer and a father to two motherless children.

This beautifully written novel is inspired by Plath’s time in Devon, after her separation from Hughes, in other words — the time when she was writing Ariel. Moses’ portrait of the poet is delicate and precise, working in flashbacks to happier times as Plath “winters” in her country manse with her children. There have been many fictionalized versions of Plath’s life both in print and on screen, but Wintering, to put it simply, is beautifully done.

Though Ted Hughes had touched on his relationship with Plath in an earlier collection of poems, Crow, he had largely remained silent and private on their time together. That all changed with Birthday Letters, a collection of poems he published shortly before he died in 1998. All of the poems in Birthday Letters deal with specific events in his relationship with Plath, from their meeting at Cambridge (“Fulbright Scholars”), to her suicide, to the way the press co-opted her story (“The Dogs are Eating Your Mother”). The resulting collection is illuminating and heart-breaking.

The Silent Woman by Janet Malcolm

It’s no surprise that the toughest journalist out there, Janet Malcolm, who has taken on the likes of murderers and Freudian psychoanalysis, would want to blow the lid off the cult of personality surrounding Sylvia Plath. The Silent Woman, published in 1995, is a brilliant rumination on the art (or lack thereof) of biography, memory, and celebrity. Originally published in The New Yorker, Malcolm gained unprecedented access to the Plath Estate through Ted Hughes’ sister Olwyn. It is certainly one of the best books ever written on Sylvia Plath and the perils of biography.