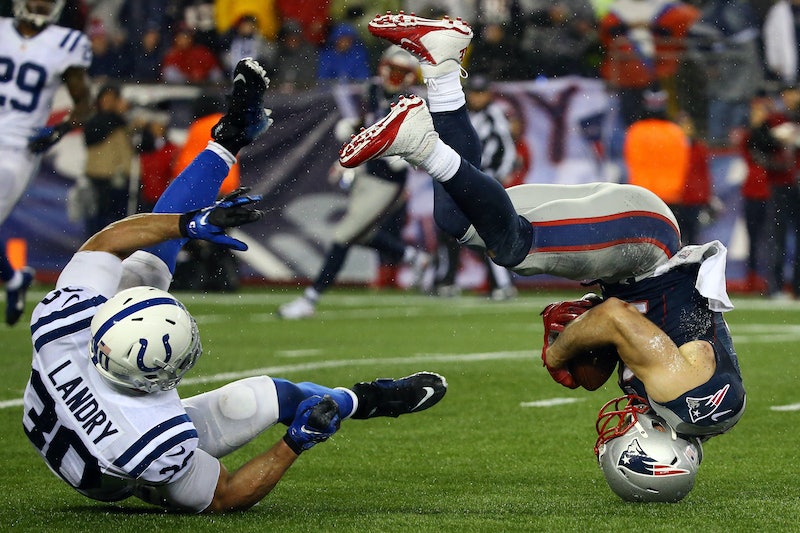 The sporting world is alight with the DeflateGate controversy, in which this year's Superbowl contenders, the New England Patriots, are being investigated for deflating their footballs during Sunday’s AFC Championship game against the Indianapolis Colts in Foxborough, after ESPN reported on earlier this week that 11 out of the 12 balls they provided for the game were under-inflated.

The incident hailed a barrage of criticism on the Patriots, especially after its coach, Bill Belichick, claimed at a press conference on Thursday that he had absolutely no knowledge of about the, um, deflated balls. He insinuated that Patriots quarterback Tom Brady — who is set to address the issue himself at a news conference at 4 p.m. EST on Thursday — knew what was going on. He said:

I have no explanation for what happened... I can tell you, and they will tell you, that there is never any sympathy whatsoever from me on that subject. Zero. Tom's personal preference in his footballs are something that he can talk about in much better detail.

What's the big deal about a playing with footballs that aren't inflated up to the NFL's standard, you ask? Apparently, softer balls are easier to throw and catch, particularly in rainy conditions, as was the case on Sunday during the game. But John Eric Goff, a physicist at Virginia's Lynchburg College and author of Gold Medal Physics, told NPR that he doubted they were deliberately deflated, because that would've given both teams a similar advantage.

While the investigation is still underway, the Twittersphere lit up under the hashtag #DeflateGate as fans took to the social media website to express their differing opinions on the potential scandal.

Some (possibly Colts fans) were, as expected, mad.

... While others defended the Patriots by stating that their decisive win against the Colts showed that they would have made it to the Superbowl, deflate-gate or not. Even Colts player Dwayne Allen said the Patriots would have won regardless.

And then there were those who were simply tired hearing about #DeflateGate, with some questioning the wide coverage of the incident compared to that of a much graver issue, like Boko Haram.

Naturally, there were those who reacted to the incident with humor.

But perhaps my absolute favorite is brands jumping on the #DeflateGate bandwagon to promote their products. Talk about being on top of their social media game.