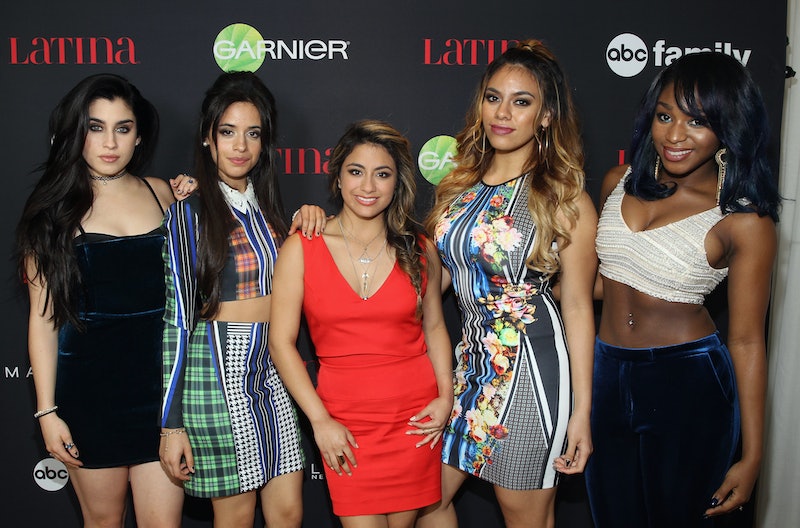 Nothing like getting the afternoon started with some serious Twitter drama. The latest round of social media madness involves the girl group Fifth Harmony and British boy band The Vamps. Teen.com reports that during an interview with Australia's Take 40, Vamps member Brad Simpson was asked about his rumored romance with Fifth Harmony member Lauren Jauregui. Apparently, fellow Vamps members James McVey and Tristan Evans interjected with a joke about the entire group having "had a go" at Jaregui. Wow... statements like these (whether made in jest or not) are completely inappropriate and just not cool. Ever.

While Evans has yet to address the fallout on Twitter, McVey has since tweeted an apology and clarified that he meant that he and the other Vamps all "had a go at flirting" with Fifth Harmony upon first meeting the ladies. Obviously that changes the context of the original statements, but McVey's amendment arrived a little too late. Fifth Harmony and hordes of their fans, affectionately known as Harmonizers, took to Twitter to express their outrage and disgust with the original comments. Despite The Vamps' poor word choice, which came off as completely sexist, there's still a lesson in all of this — a lesson which can be taken from tweets posted by the other members of Fifth Harmony and their fans.

While Jaregui has yet to respond on Twitter, it's really encouraging to see the other ladies of Fifth Harmony come to the defense of their group member, while addressing sexism and encouraging female empowerment. The incident has even spawned the hashtag #LaurenIsOurPrincess:

And here is McVey's apology and clarification below:

If anything, this situation calls out the blatant sexism that all too frequently leads to women becoming the butt of some truly disgusting jokes. As for the ladies of Fifth Harmony confronting this issue head on? That's what I call a certified "BO$$" move.