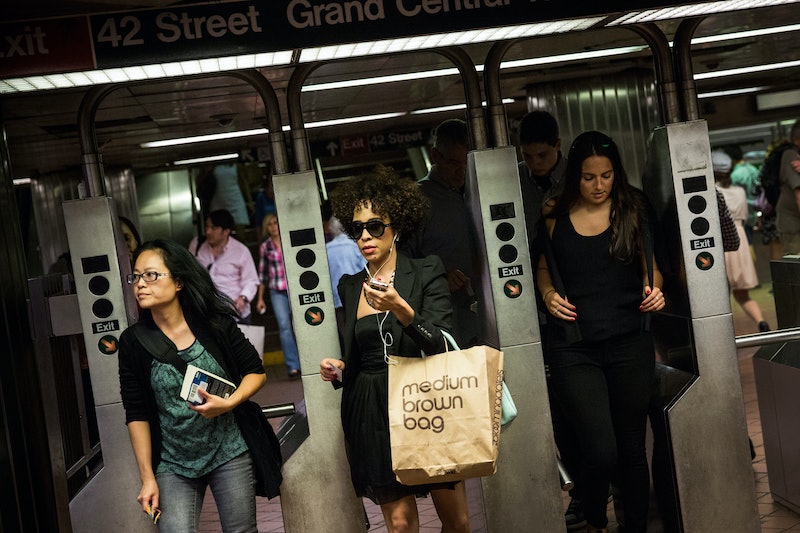 While New York City's reputation as the place to be seems everlasting in many ways, the realities of living here, while revelling in its many charms, can be incredibly grim, too. Case in point: the Metropolitan Transit Authority (MTA) will raise its transportation fares come March, by a quarter from $2.50 to $2.75. The cost of a weekly pass will go from $30 to $31, and a monthly pass will increase by $4.50 to $116.50.

Set to take effect on March 22, the authority's board approved the new fare increase, a move that has become routine, reported the New York Times, scheduled to take place every two years as part of the MTA's long-term revenue plans. Its chairman, Thomas F. Prendergast, said the fare hike was modest and necessary to balance the organization's budget against the rising costs of providing services. Although it recently saw record-high ridership, the MTA is still incredibly broke, as it weighs infrastructure and maintenance costs and piling debt, with what it perceives as a fair fare price.

MTA board member and the city's Department of Transportation commissioner, Polly Trottenberg, said that the fare hike was the most reasonable considering the MTA's budget:

Obviously nobody wants to vote for a toll increase... [But] it causes the least damage to the largest amount of folks. It’s as fair as it can be under the circumstances.

As paltry as the fare hike might seem to some, such as tourists who have allocated budgets for their NYC vacation or the one percent, who probably hardly take public transportation, anyway, quarters add up, as do an additional $4.50 a month. Consider the man featured in Humans of New York a few months back, who said he spent three hours travelling home from work by foot, because it was either a $2.50 subway ride home or half a gallon of milk for his family.

While the MTA might not be at fault here, perhaps the romanticized idea of living in a city that "has it all" should be viewed in a different light. At $8.75, NYC's current minimum wage is barely enough for many to scrape by on, especially with a family, against some of the highest housing rental rates in the country — although New York Governor Andrew Cuomo proposed on Wednesday to raise the minimum wage in the city to $11.50, though if approved will only be enforced at the end of 2016.

Perhaps the issue, then, is NYC's rising economic inequality, because when the obscenely rich traipse around the city alongside those struggling just to survive, surely there has to be a larger issue at hand that bears addressing.